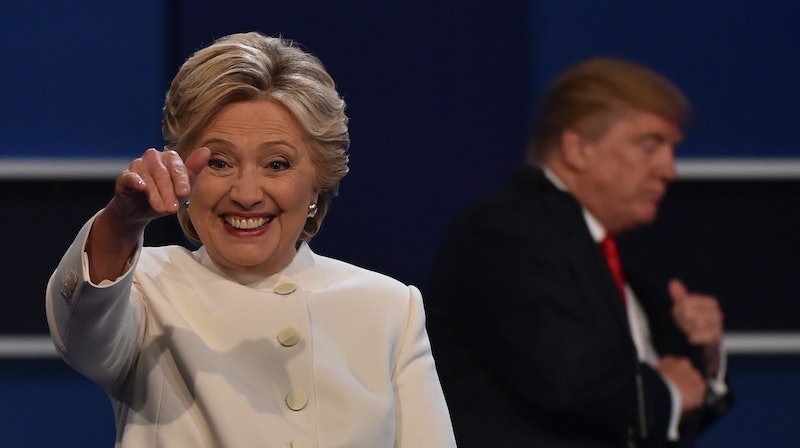 There are a lot of ways you can react to the final presidential debate and the fact that, during it, Donald Trump called Hillary Clinton "nasty" under his breath. You could be sad. You could be angry. Or you could turn "nasty girl" into a meme. Guess which one Twitter chose? As you might imagine from the fact that I said "Twitter" and, you know, the title of this article, they went the meme route and it was every bit as hilarious, thoughtful, and empowering as you would imagine it to be. The tweets ranged from being jokes — some bringing Janet Jackson and her 1986 hit song "Nasty" into this — to empowering calls to action — in which women proudly declared themselves nasty and standing with Hillary Clinton — and it was genuinely magnificent to see.

Trump might have said the words under his breath, but Twitter isn't letting him either get away with it or hurt the Clinton campaign with the insult. In fact, they're reclaiming the phrase as something that will now go down in internet history as one of the more important parts of his many, many, many words during the final debate. So, if you want to laugh, to cry, and to feel like putting on some Beyoncé and strutting your way in to work in the morning, check out these memes.

1. Nasty Women Are With Hillary

Is that not what it means?

It's a compliment now. You gotta keep up.

4. Sorry To The Meek

I hear you have to wait around the block for a week to get in.

7. Shout Out To Janet

The real hero of the night.

8. A New Holiday Is Declared

As nasty as possible, ladies.

If this doesn't catch on, I'll be genuinely upset.

Up next: my socks.

That's what I heard.

I think we have a winner.

All right, guys, I think I'm going to call it. I'm a nasty girl, you're a nasty girl, we are all nasty women. Make sure to cast your vote in November, and make your nasty voice heard.