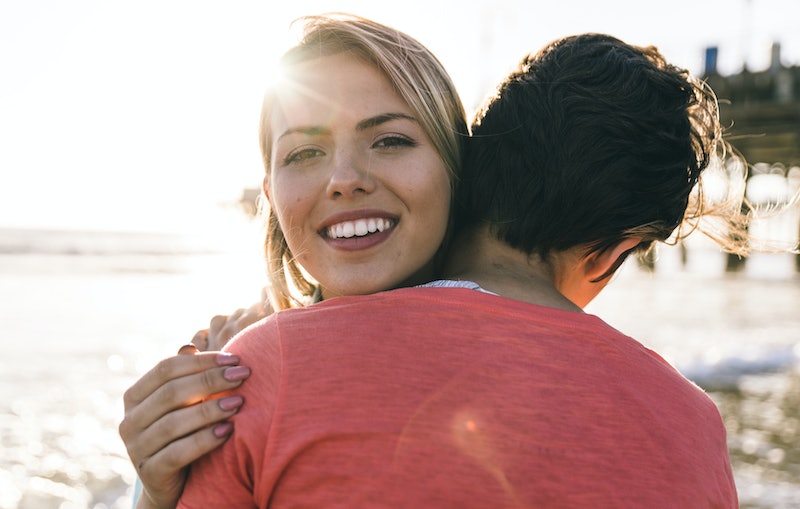 Saying "I love you" for the first time in a relationship can be incredibly scary, but it's a huge relationship milestone. You need to be sure that you're ready and you need to understand that your partner might not be ready to say it back. "You should never rush saying 'I love you'," BetterHelp telehealth counselor and psychologist Nikki Martinez tells Bustle. "You should never rush making someone say, 'I love you'. It's all about making sure you're both comfortable — and for some people that comes comes more quickly than others.

But fundamentally, why is saying "I love you" such a big deal? Whether you're terrified or super excited at the prospect, it's something that that takes on a larger than life role in a relationship. And it's only three little words — words that describe a feeling— so it's not like you're doing anything, you're only acknowledging that feeling. Yet it's enough to bring out a fight or flight response for a lot of us in our relationships.

Jenna Birch discussed the psychology of saying "I love you" in a recent Psychology Today article and Business Insider made a helpful video on the subject. While it's definitely worth checking out the whole video, especially if you've ever wondered who says "I love you" first and why they do it, the highlights are here.

A quick side note, this is all very heteronormative, focusing on the male and female dynamics of saying "I love you" first. It' would be interesting to see the findings on same-sex couples, but for now this is a good insight into heterosexual partners:

Art Markman, a psychologist at the University of Texas, Austin, has said that just the fear that we won't hear the words "I love you" back keeps many of us saying it first. To be honest, there are few things I can think of more awkward than saying "I love you" and hearing "Thank you." back, so I get what he's saying.

It's Not A Female Thing

Not only are men more likely to say it first in a heterosexual relationship, a 2011 study published in The Journal of Social Psychology by Marissa Harrison, an associate professor of psychology at Pennsylvania State found that some men did it as early as a few weeks into a relationship.

In Fact, Women Are More Discerning

Part of the reason for the difference? Harrison found women are predisposed to waiting longer in order to correctly assess a potential mate, rather than just jumping in.

And Men Have Their Motives

Surprise! A 2011 study published in the Journal of Personality and Social Psychology with research from University of Michigan found, essentially, that some men say "I love you" in order to gain trust to have sex for the first time, whether they're conscious of it or not.

But It Sometimes Backfires

This attempt at gaining trust often backfires, however, because the same study found that women are not desperate to hear "I love you"— in fact, they often sense the insincerity if it's said too early.

Actually, the study showed that women actually like hearing "I love you" after they'd had sex for the first time, rather than before. Which makes sense to me, if you fear your partner is being disingenuous it's better to hear it when they would have nothing to gain by saying it.

Some Men Don't Have A Motive

This isn't to paint all men as desperately lying to get into the sack. Some men don't even realize their rushing it, while others say it first just because they feel the pressure to adhere to heteronormative roles where the man makes the first move on all counts.

Just Make Sure You Mean It

Bottom line? It doesn't matter who says it or when, as long it's authentic. Just take your time and say it when it feels right.