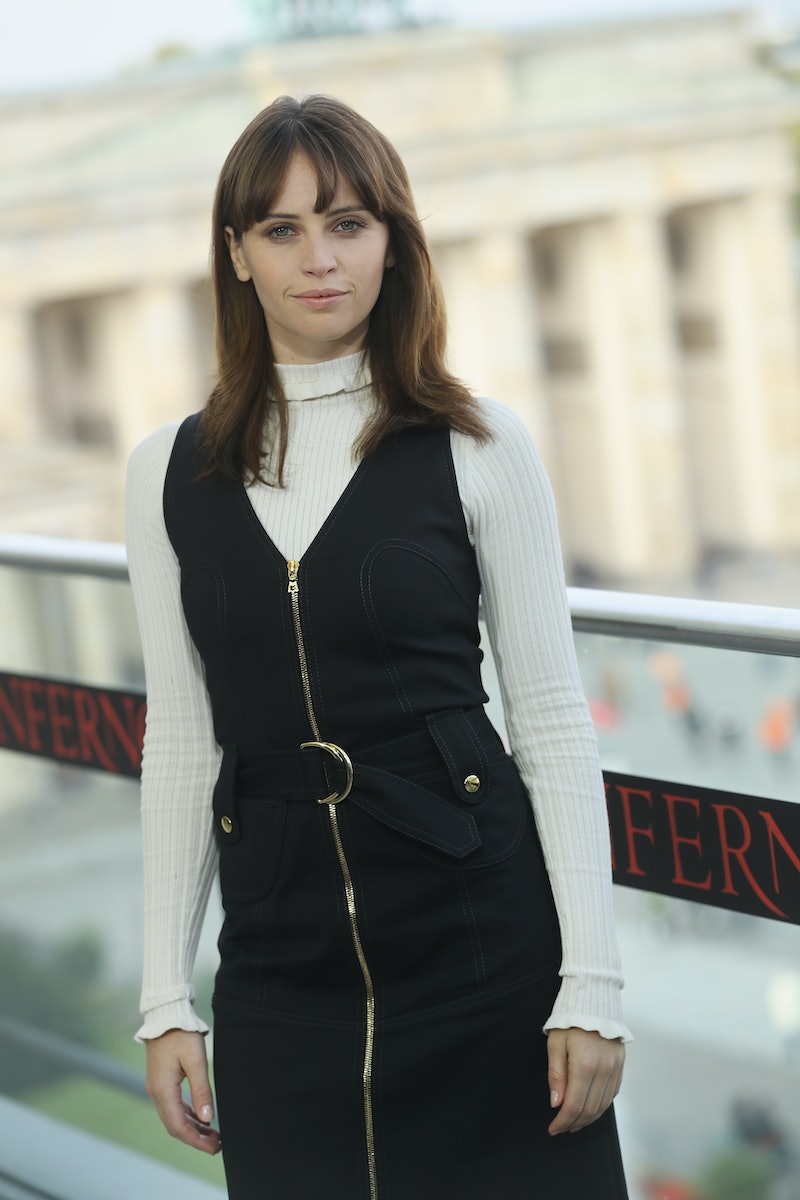 Generally, when you think about heading to the theater for the next big Da Vinci Code sequel, you're probably thinking of just one person: The lovable Tom Hanks. Despite the jokes about his character, Robert Langdon's hair in the past, Hanks keeps bringing people back to the theater for more adventure. And while I love the guy just as much as the next human with a heart, my hope is that when audiences see the third film in the franchise, Inferno (in theaters October 28), they walk away thinking of another wonderful actor: Felicity Jones.

Now, I may be biased seeing as Jones is playing the second female protagonist in a Star Wars film this December (here's looking at you, Rogue One ), but when I spoke to Jones at Fort Belvedere in Florence, Italy in honor of Inferno's release, she made it very clear that she's an actress we should all keep an eye on, whether or not she's thwarting villains in a galaxy far, far away. In the new mystery film, Jones plays Sienna, Robert Langdon's companion for this Dante-themed adventure through Italy, and unlike the female lead in most blockbuster films (see: every female companion James Bond ever has, every woman helping Indiana Jones solve a mystery, and comic book-inspired characters like the wicked smart scientist, Jane, in Thor), Sienna commands the story just as our hero does. This element is something Jones says drew her to the film.

"To be able to play a part that is equal to that of the male hero was a great opportunity," she says.

But beyond simply giving Sienna truly equal billing with Langdon, the film actively pokes fun at the age old expectation any time a major film pairs a beloved, older male actor with a young, female actor: the ever-present sexual tension. Instead of falling prey to that trap, the film shuts down the inkling by not only staying away from that trope, but having numerous characters make quips about the relationship between Langdon and Sienna ("You don't have to lie, we're in Italy," jokes a museum docent when Langdon insists that his relationship with Sienna is platonic).

That attitude is clearly important to Jones, who tells me, "We don't need another film about a romance between an older guy and a younger woman, so it was great that it's about friendship, actually. I haven't really seen that before, and [Sienna & Langdon] really connect in a very meaningful way, but it's very much on an intellectual capacity."

In fact, it's pretty important that Langdon, a world renowned scholar, and Sienna, one of the smartest women to ever be written into a major motion picture, connect on an intellectual level. They are geniuses — they're far too busy to play out the same storyline that every other adventure film has played out before. Plus, the way Jones sees it, audiences are hungry for something more, anyway.

"I think the audience has a great appetite for nuanced and complicated characters. With someone like Sienna, she's always thinking on many different levels," says Jones. "Long may it continue, these kinds of characters in movies as we move forward."

More like this
On 'The Handmaid’s Tale,' Christine Ko Fights Back
By Gretchen Smail
Jinkx Monsoon Is About To Get Real Sketchy
By Sam Ramsden
The Fashion Blogger Behind "Christian Girl Autumn" Just Dropped A Clothing Line
By Allie Fasanella
After 'Hocus Pocus 2', The Sanderson Sisters Are Coming to Broadway
By Radhika Menon
Get Even More From Bustle — Sign Up For The Newsletter