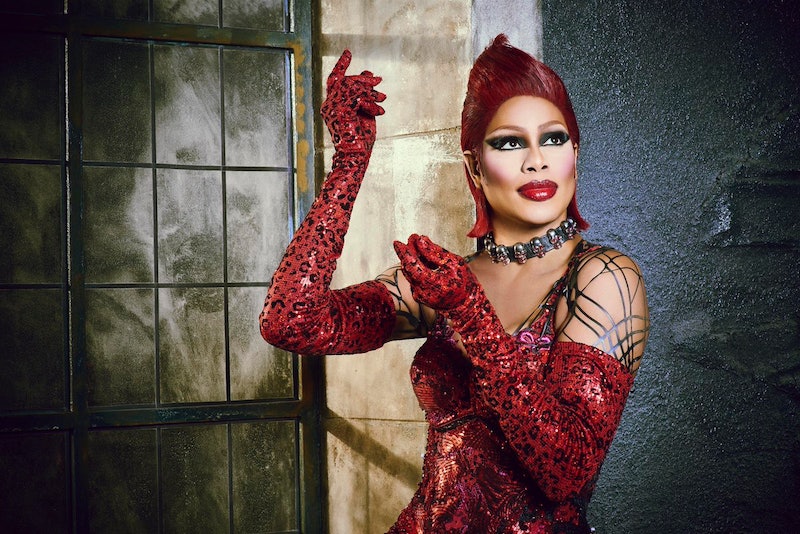 I've been a fan of The Rocky Horror Picture Show since I was 14, when I waited for my parents to go to bed and then snuck out to the living room to watch the movie my mother had declared off-limits for being both "too adult" and "too gay." As a teen struggling with her sexuality and gender, Rocky Horror 's overt depictions of gender non-conformity and queer sexuality were among my first exposures to a world outside the cisgender, heterosexual norm. On Thursday night, after more than a year of antici... pation, FOX's remake The Rocky Horror Picture Show: Let's Do The Time Warp Again premiered and this time, I didn't have to sneak around to watch it. Though it is a fun, entertaining tribute that should appeal to fans of the original and Laverne Cox's performance as Dr. Frank-N-Furter is treated perfectly, much of the original's subversive tone on gender and sexuality is missing.

Rocky Horror Picture Show has existed for 40 years as both a classic cult film and queer cultural touchstone. Fans of the original midnight movie have been waiting with baited breath since FOX announced that it would be mounting the tribute and the stakes rose when Cox was cast as the murderous, seductive, gender-bending space alien icon of the film. Tim Curry's portrayal of Frank-N-Furter, clad in lingerie and dramatic makeup, was incredibly subversive for the 1975 original, and the film's ahead-of-its-time depictions of bisexuality and gender-flexibility made it a longtime favorite of queer audiences. And though many expressed excitement about Cox's casting, others, myself included, worried about how differently the themes would play out with a transgender woman portraying the self-described "sweet transvestite from [the planet] Transsexual [in the galaxy] Transylvania."

Much of the early concern centered around Frank-N-Furter's centerpiece opening song, "Sweet Transvestite" and its use of the now-outdated term, usually used in reference to cross-dressers, that is widely viewed as offensive to the LGBTQ community. Cox herself told Vanity Fair that she had a conversation with director Kenny Ortega about the use of the word, because she was concerned that it would confuse audiences. In the end, she told the magazine, "Historically, the terms have changed [and] it doesn’t mean the same thing today that it meant in the 70s ... It’s not appropriate to refer to trans people as a transvestite [today], but it is [used here as] the character in that specific moment in history."

Thankfully, against the backdrop of the Rocky Horror remake as a whole, "Sweet Transvestite" feels mostly campy and silly, rather than anything to be offended by. Cox, absolutely stunning in red lingerie and matching hair, looks like anything but a cross-dresser. It's also made better by the fact that, unlike the original film when the Doctor is referred to by male pronouns, Cox's Frank-N-Furter is consistently referred to as she or her. Cox also looks utterly beautiful and feminine in every scene, leaving no doubt that the directors fully intended for her character to read as a woman. Additionally, because the TV version feels more like a tribute than a true remake, her version of the Doctor's biggest song feels no more awkward than the thousands of cisgender women who have sung along with the movie for the past 40 years.

Though this was the best decision to ensure that Cox's version of the character was treated correctly, making it clear that Frank-N-Furter is a woman also reverses many of the original film's themes of sexual fluidity. Curry's 1975 performance read as as gender-bending male, making Frank's sexual encounters with Rocky, Eddie, and Brad fairly queer, while only his interactions with Janet came off as relatively straight. With Cox, only her interactions with Janet read as queer.

This is in keeping with the general tone of the remake. While the TV version isn't exactly what I'd call family-friendly, it certainly feels more tame than the original. There aren't many instances of overt queer sexuality, with on-the-mouth kisses between opposite-gender characters getting agonizingly close to happening before they pull away at the last second. What we're left with is a Rocky Horror Picture Show that feels considerably straighter than the original, which is a bit disappointing because it blunts the feeling of rebelliousness and sexual subversiveness that's become synonymous with the movie.

Despite that somewhat sanitized feel, the Rocky Horror remake does make its own unique, progressive marks on the venerable franchise. First and foremost, moving beyond the original film's all-white cast is a step forward and acknowledges the need for racial diversity on television. While casting three people of color in a still overwhelmingly white cast is far from perfect, it is still an improvement on the original.

Secondly, and perhaps more importantly, the updated version features a trans woman portrayed as attractive and desirable (albeit in the context of a murderous seductive space alien). Cox is absolutely stunning in every single scene through her half-dozen costume and makeup changes. Her Frank-N-Furter, much like Curry's portrayal, is confident and unashamed of her sexuality. Cox absolutely owns her sexiness through every step of her high heels, and even through the campiness of the script, there's never a moment where she feels like a fetishized object. At a time when we're still struggling to have even trans characters played by trans performers and when trans women are rarely viewed as being worthy objects of desire, Cox's confidence and clear enjoyment of the role is inspiring and empowering.

At the end of the new Rocky Horror, I was just left wondering who exactly it was created for. If it was meant to be a totally faithful remake, it lacked much of the original's punch, frank queerness, and subversiveness. However, as a love-letter to an icon of the counterculture done by those with a deep love for the original text, it is both terribly fun and forward-thinking in its own way. As a trans woman and Rocky Horror fan of 20 years, hearing Cox skillfully belt out "Sweet Transvestite" while owning the sexuality and sensuality of our favorite alien mad scientist made the movie worth watching, even if it stumbles a bit in its precarious platform heels.

More like this
Revisit 1992’s 'A League Of Their Own Cast' Photos After The New TV Series
By Grace Wehniainen
At 28, Lesley Manville Was Acting, Picketing, & Singing Kate Bush Songs
By Olivia-Anne Cleary
Christina Aguilera Took A Powerful Stand At Brighton Pride
By Sam Ramsden
Demi Lovato Explains Why She's Now Using She/Her Pronouns Again
By Alice Broster and Radhika Menon
Get Even More From Bustle — Sign Up For The Newsletter