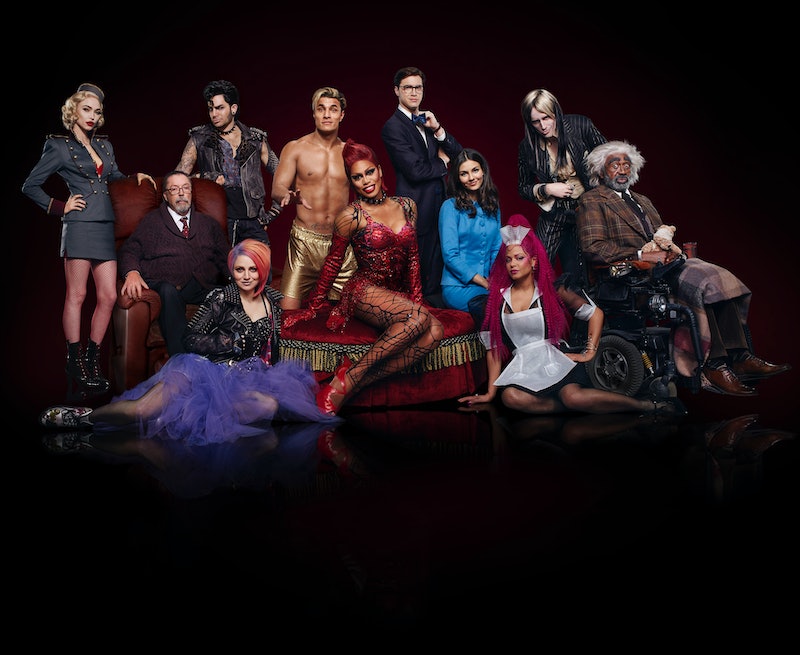 The TV movie is mostly filled with young talent, each poised on the edge of stardom, like Nickelodeon star Victoria Justice and Disney star Ryan McCartan, but there are also a few more established actors peppered in the cast, like Orange is the New Black's Laverne Cox and, most impressively, Tim Curry, who starred in the original Rocky Horror Picture Show film. Curry is joined by brand new faces this time around, and you can check them out below!

Tim Curry Is The Criminologist

Tim Curry originated the role of Dr. Frank-N-Furter in the original film. He now returns as the Criminologist narrator.

Laverne Cox, of course, is best known for her portrayal of Sophia Burset on Netflix's Orange is the New Black.

Staz Nair, who appeared as Qhono on the last season of Game of Thrones, plays Rocky Horror, Dr. Frank-N-Furter's creation.

Reeve Carney is a Broadway vet, having originated the role of Peter Parker in the somewhat disastrous musical Spider-Man: Turn off the Dark. He most recently appeared in Penny Dreadful as Dorian Gray and played a love interest in Taylor Swift's "I Knew You Were Trouble" music video.

Victoria Justice is in the midst of moving from Nickelodeon star to grown up, Hollywood actress. She led her own show, Victorious, for three years, and has recently made the jump to film.

Ryan McCartan is a Disney Channel star, best known for playing Diggie Smalls on the original show Liv and Maddie.

American Idol's Adam Lambert joins the group as Eddie, a badass biker with a rock-n-roll edge.

Another Broadway vet, Ben Vereen has appeared in many iconic musical productions across the nation, including Hair, Jesus Christ Superstar, Pippin, and Wicked.

Younger viewers might recognize Christina Milian as Vanessa from the short-lived sitcom Grandfathered, but to others she'll always be the singer of "AM to PM."

On stage, Annaleigh Ashford has played Glinda in Wicked, Jeanie in the Hair Broadway revival, and Lauren in Kinky Boots. On the screen, Ashford has appeared in Law & Order: SVU, Smash, and she provided extra vocals for Frozen!

Ivy Levan is a singer/songwriter who just released her debut album, No Good, in 2015, and sang the main theme for the movie Spy , "Who Can You Trust."

You can decide for yourself whether the new cast lives up to the original on Oct. 20, when The Rocky Horror Picture Show: Let's Do The Time Warp Again premieres on FOX.