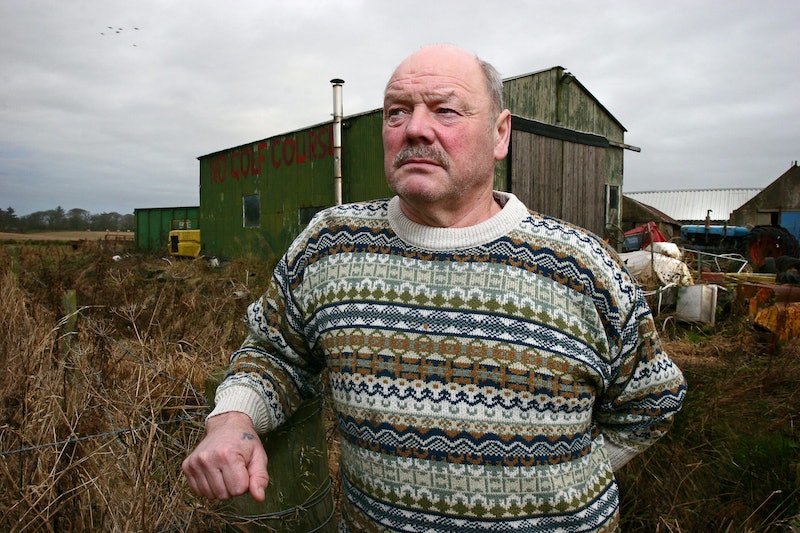 You've Been Trumped followed Michael Forbes and his family in Aberdeenshire, Scotland. The Forbes were refusing to sell their land, which had been their home for 43 years, to Trump so he could construct a luxury resort called Trump International Golf Links. Trump's construction was met with protests from the local residents as well, whom Baxter interviewed for his documentary.

Now, five years later, You've Been Trumped Too returns to update us on the Forbes' situation. It turns out that the construction of Trump's resort has cut off the water supply to the surrounding areas, including the Forbes' land.

"The Trump organisation said back in 2010 that the Forbes would have the best water they'd ever had," Baxter told the BBC. But according to Baxter, they don't; Michael's mother, 92-year-old Molly Forbes, is shown fetching water from a nearby stream using containers and a wheelbarrow in a teaser video for the documentary.

"I was amazed to observe the ongoing consequences of Donald Trump's actions in Scotland, at the very same time he was running for president and felt it was a story American voters needed to hear before 8 November," Baxter told the BBC.

But a representative for Trump's resort said otherwise. "We have not seen the so-called film and have no interest in it,” a Trump International Golf Links spokeswoman said in a statement. "Anthony Baxter is not a credible journalist or filmmaker. He has no interest in the facts or the people of north east Scotland. He has propagated lies and nonsense about the company for years in an attempt to make a name for himself off the back of Trump."

Trump himself makes an appearance in the film's trailer through interview footage. "What's unfair is that you show Molly Forbes," he says. "She actually reminds me a little bit of my mother, if you want to know the truth."

"Well he hadn't been very good to her then," Molly is shown saying. "We've actually no water at all. All because of Trump."

The film reportedly also shows the journey of Michael and his wife, Sheila, to the Republican National Convention in Cleveland, Ohio. And unlike the first documentary, both Trump and his son Donald Trump, Jr. agreed to be interviewed regarding the Forbes' situation, Deadline Hollywood reported. Seeing as he consented to be interviewed for the documentary, it seems unlikely that Trump will actually stop this documentary from being screened. But you never know. He could change his mind.

The first film was completely crowdfunded, and Baxter is attempting to crowdfund You've Been Trumped Too through a Kickstarter as well. With nine days to go, the project has 759 backers and more than $60,000 pledged of its $75,000 goal.

You've Been Trumped Too has been acquired for U.S. broadcast by Participant Media. It is scheduled to be released on Oct. 28, first in New York and Los Angeles theaters, and then throughout the United States.

More like this
Everything To Know About The Musical 'Joker' Sequel – & Lady Gaga’s Role
By El Hunt and Sam Ramsden
What Is Ben Affleck's Net Worth? At 50, The Oscar Winner Makes 8 Figures Per Film
By Meg Walters
Dr. Anna Pou Is Still Practicing Medicine After Facing Murder Charges
By Brad Witter
'Children of the Underground' Subject Faye Yager Now Runs A North Carolina B&B
By Brad Witter
Get Even More From Bustle — Sign Up For The Newsletter