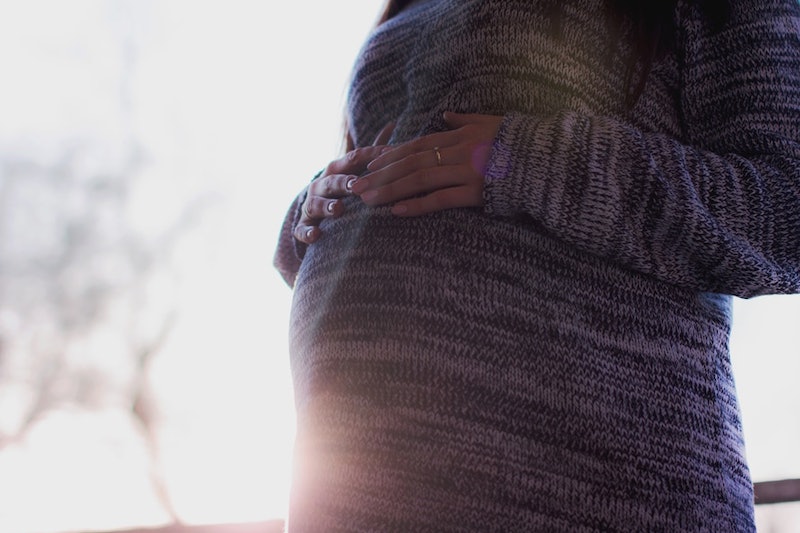 During the third presidential debate on Oct. 21, Republican presidential nominee Donald Trump didn't just demonstrate a gross misunderstanding of the circumstances of late-term abortions and what they entail, but helped perpetuate extremely dangerous rhetoric around it that is harmful to women and families everywhere. In light of Trump's comments, a Mormon mother opened up about her late-term abortion on Facebook, hoping to illuminate the truth behind the incredibly heartbreaking but necessary need for late-term abortions to be safely and readily available to women.

Democratic presidential nominee Hillary Clinton was quick to point out the danger and ignorance of his comments — that late-term abortion is reserved for cases, all heartbreaking and tragic in nature, in which there is something compromising the mother's ability to carry to term, or the survival of the fetus. The moderator moved on from the topic before it could be fully-fleshed out, but the fact of the matter is that no late-term abortion is a choice made easily — in fact, in some cases, it isn't even a choice so much as a necessity to keep the mother alive. And despite Trump's scare tactics, late-term abortions, or abortions made after 20 weeks gestation, only make up 1 percent or fewer of all abortions; the fetus is not "alive" and is not "ripped out of the womb" in pieces; in fact, most of the rhetoric Republicans center around late-term abortions are not only untrue, but dangerously distract from the actual reasons they're happening in the first place.

Alyson Draper, a mother who has endured the heartbreak of confronting the decision to have a late-term abortion, knows better than anyone. After the third presidential debate, she powerfully made a post about her late-term abortion to put an end to the fear-mongering talk.

I HAD A LATE TERM ABORTION. IT IS NOTHING LIKE DESCRIBED BY TRUMP. PLEASE DON'T BASE YOUR VOTE ON THE FEAR MONGERING HE IS DOING. PLEASE READ MY EXPERIENCE:

I had to have a late term abortion. It was the worst moment in my life. What made it even worse was the State of Utah had made it illegal. I had one dead twin. The other had severe Spina Bifida, and would only have lived with life support, in great pain, for a few days.

I lay on the hospital floor, bawling hysterically, for twelve hours, waiting for an ethics committee of the health care corporation to decide my case justified what had to be done. My health was in danger due to the dead fetus. My husband and I consulted our LDS Bishop, who assured me I needed to do what I had to do, that it was even within LDS guidelines to do so. He reminded me I had six kids at home who needed their mother to live.

The abortion was terrible. It was done very gently, by Caesarean section, leaving the babies in their amniotic sacs. The living baby passed very quickly.

It was horrific. I think it even affected my dear physician, as he had never had to end a pregnancy before. I developed PTSD for which I had to be treated for years, mostly because of the fact I had to have it at all.

No woman should have to have the state have a say in the most painful decision she will ever make. Nobody is tearing babies apart in late term. They are always humanely done, only in situations where there is a non-viable or severely defective fetus and/or the mother's health is at risk.

Please don't vote for a candidate or a party that would make these decisions for the women who will die or be forced to carry unviable fetuses to term. This is a decision that is so painful and so terrible. Only the parents of the baby and a physician should be involved in the decision.

Already the post has generated over 100,000 likes and 112,000 shares, resonating with people who understand Draper's pain and people who cannot even imagine in. There is no true way of measuring the damage that Trump's campaign has done to this country in terms of xenophobia, the normalization and acceptance of sexual assault, and spreading gross misunderstandings of women's issues like late-term abortion — but thankfully, posts like Alyson Draper's prove that we can be a lot louder than his hate.