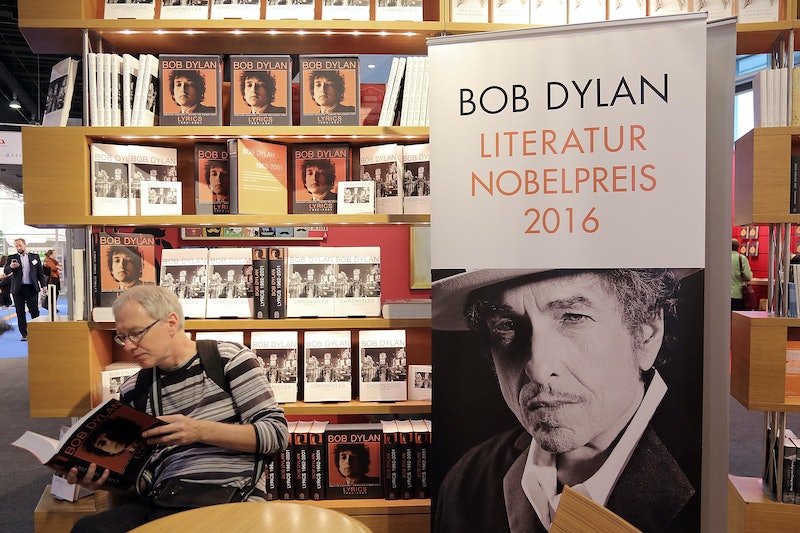 The 2016 Nobel Prize in Literature went to an unlikely candidate, one whose name is more closely associated with guitars and harmonicas than with typewriters and publishing contracts. The unexpected nod from the Swedish Academy has some people wondering, Is Bob Dylan's Nobel win bad for bookstores?

Every book retailer, from big-box stores to indie bookshops, can capitalize on authors' success during the literary awards season. Winning the National Book Award, Pulitzer, Nobel, or Man Booker Prize distinguishes an author and their writing as being a cut above the rest. Consequently, book-lovers who want to read assuredly good stories, and people who just want to know what all the fuss is about, come out in droves to pick up titles from relatively unknown writers, such as Han Kang, Viet Thanh Nguyen, and Phil Klay.

This year, things are different. Bob Dylan isn't known for writing books, but for creating generation-defining music. The CEO of Swedish publisher Bonnier Books, Jacob Dalborg, bemoaned the impact of Dylan's win on bookstores at this year's Frankfurt Book Fair: "I think it’s sad that it isn’t a Nobel prize winner where the bookshops and booksellers can sell more books. I think that’s sad."

Is Dalborg right? As Quartz points out, "the win will surely be great for Dylan’s album sales and downloads," but booksellers might have a difficult time marketing Dylan's books, or the "1,000 books written about him," to readers who just finished listening to Highway 61 Revisited and Blonde on Blonde for the first time. The Kindle version of Tarantula might see an uptick in sales, but local bookstores may not be able to sell Dylan's book of paintings as efficiently as Amazon can ship out $6 digital copies of his poetry.