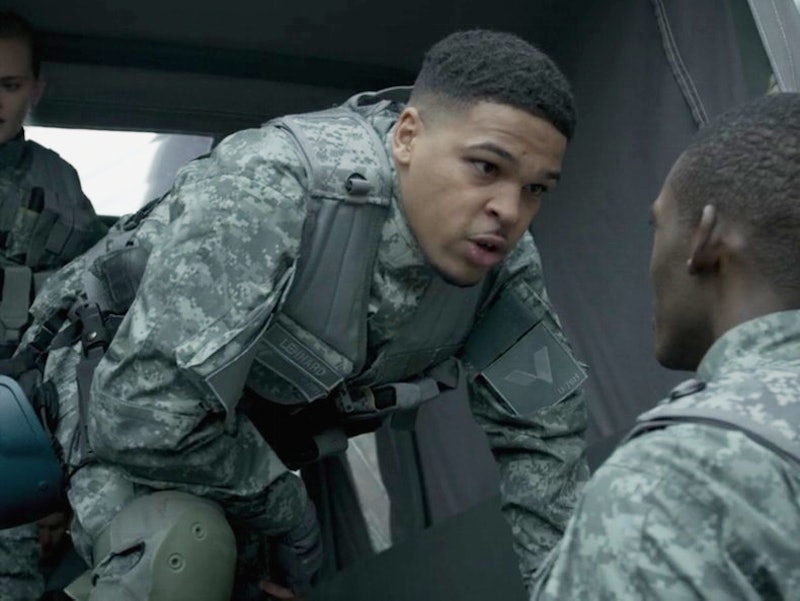 Great news for people who enjoy a creeping sense of unease: the Black Mirror soundtrack for "Men Against Fire," the fifth episode in the latest season, has dropped and, much like the show, it provides a certain something that gets under your skin and haunts your nightmares. If you're a Black Mirror fan, that's what you're there for, right? And it's no wonder. The soundtrack was loving crafted, in part by Portishead's Geoff Barrow, who has had an incredibly diverse career. Aside from his work for Portishead, he's remixed songs for the likes of Primal Scream, Paul Weller, and Depeche Mode, written songs for Neneh Cherry, and acted as the music supervisor on the Banksy film, Exit Through The Gift Shop.

Barrow worked alongside the composer Ben Salisbury to create the soundtrack, and it's not the first time the pair have worked together. They've also created doom-laden audio stylings for the Alex Garland sci-fi movie Ex-Machina (their score won the Ivor Novello Award for Best Original Score) and for the Ben Wheatley film, Free Fire. So how does their glitchy, chilling soundtrack tear any faith your had in the universe into tiny pieces? Let's explore, song-by-song, before you try to sleep with the lights on and one eye open.

There's very little melody in this; it's just one long drone. The reverb at the end of the first minute gives it a sense of industrial menace, and Salisbury and Barrow slowly build on this tension. Listening to this feels like falling asleep on a night bus and waking up to find yourself at the end of the line, with no idea where you are or how to get home.

The electronic-hammering feels oppressive. You've got to applaud Salisbury and Barrow for crafting the audio version of a tension-headache.

I got some heavy Stranger Things vibes listening to this track. It conjures up something far nastier than roaches — demogorgons — for me, and all the terror those beings entail.

This feels like the soundtrack to urban alienation. That slow drone and the nervous pacing beat beneath it. It's everything you've ever felt in a big city you didn't feel safe in.

Sure, no song titled "Nightmare" is going to be sunshine and roses, but the extremely quiet, slow build of this creates a hard pit of dread in your stomach. Then there's a drum beat that sounds like someone's feet running — fast. It's the sawing electronic sounds that really set my teeth on edge, though.

Again, '80s Stranger Things vibes. That's no insult. The only other soundtrack this scary in recent memory on the same nightmarish level of creepy was that one.

Like an electronic wind blowing through some raggedy trees in a forest at night.

It's the waiting that's the scary part when watching a horror movie, right? You know the kid's going to be haunted, the babysitter's going to get stabbed, the monster is going to lunge out at you. So too with this song, which gives the listener over a full minute of silence before the pulsing begins, and it crescendoes to a wail.

Rhythmic surges of sonic unease are juxtaposed with the keen of what sounds like violins.

A song of this name couldn't be that sinister, could it? Weirdly, it's not. A brief moment of repose, presumably so we don't get numbed to the liberal helpings of audio dread we're being served up.

Low audio groans combined with shivery stabs of violins. If this is understanding, I don't want to understand.

In Black Mirror's storylines, there's often a narrative arc of going from innocence to knowledge, with the knowledge usually being so horrifying that you wish you'd never looked under the surface of things. As such, these seemingly cheery titles are all the more awful given the show's content. The audio corresponds with this sense of unease.

Could be worse. Creepy, but I'm not jumping at my own shadow.

This reminds me a little of the Goblin soundtrack for cult horror movie Profondo Rosso . Like Goblin's soundtrack, Barrow and Salisbury prove that you can make a track that sounds like arcade game music, and it's all the more terrifying for its unexpectedness.

So, if you're feeling way too happy and at peace in the world around you, you might want to work your way through the songs above. After all, in Charlie Brooker's world, happiness is the sign that you're just not looking closely enough at the chaos around you.