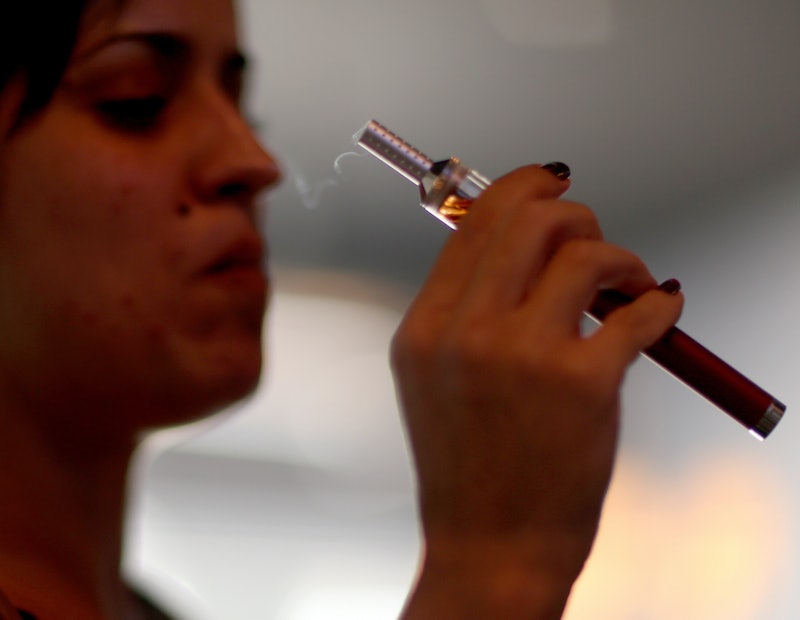 Attempts by the $1.5 billion e-cigarette industry to brand itself as a safer alternative to smoking has gone up in smoke (or vapor.) New data shows that emergency rooms in the U.S. are seeing more young children with liquid nicotine poisoning. A small amount — just a teaspoon — of the e-liquid can be fatal for a small child if they get their hands on it.

In addition, e-cigarettes remain unregulated by the Food and Drug Administration; there are mixed results about whether they help people quit smoking; and critics say they target teens with "e-juice" flavors like peach, vanilla, and bubblegum. But are the negative numbers being overly hyped?

The New York Times reports that nicotine liquid is absorbed much quicker than regular tobacco, so the risk of poisoning is more acute. The number of calls to poison control centers related to e-liquids has rocketed upward — by 300 percent. More than 350 people were told to go to the hospital after calling, which was three times the number reported in 2012.

Adults aren't immune to the potential dangers. Ashley Webb, the director of the Kentucky Regional Poison Control Center, told the Times that only a millimeter of the e-liquid equals the amount of nicotine found in numerous cigarettes.

Adults who are handling e-cigarettes or refilling e cigarettes have the potential to get it on their skin as well and have the same symptoms: nausea and vomiting, some pallor and sweating, salivation. We’ve seen a couple of cases with increased heart rate and blood pressure. We’re concerned that in a significant enough exposure we’d see cardiac affects and potentially nervous system affects including seizure.

But Andrew Couts of Digital Trends says that it all comes down to responsibility. Even though e-liquid is highly dangerous, Courts writes, the Times is stirring up more controversy than is needed. He reports:

According to the NPDS’s annual report from 2012 (PDF) – the most recent publicly available report – 193,443 poisoning cases involved household cleaning agents, 54,445 involved alcoholic beverages, 11,848 were caused by pens or other ink, and 20,306 were caused by toothpaste.

In other words, even if the number of e-liquid poisoning cases jumps to 15 times the 2013 level, toothpaste is still the more prevalent poison.

Mario Aguilar at Gizmodo has a simple solution: Make the e-liquid bottles have harder-to-open caps that need to be pushed down to open, like most medicine containers.

But unified legislation is probably needed to champion that idea to make it a reality. E-cigarettes bans have already been put into place in Chicago and New York City. Forty state attorneys general agreed last year that regulations need to be implemented, and the notoriously slow-moving FDA has promised to take up the issue at some point.

Even though the science behind e-cigs remains murky, it's better to be safe than sorry.