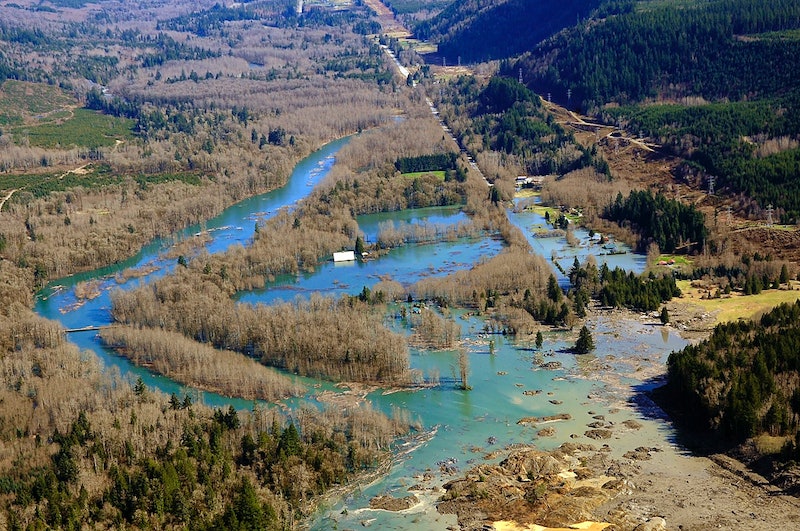 The death toll from last weekend's mudslide in Washington state rose to 16 Wednesday, with at least 176 others still unaccounted for. The rescue operation is ongoing, but prospects appear grim: No survivors have been found since Saturday, when the landslide occurred, and rain is expected to further inhibit the search. But how common are landslides like this one? Where and when do they occur? And how can you possibly avoid them?

Mudslides are a type of landslide, so here's three things you should know about them...

1. Landslides Happen In All 50 States

While landslides in the Pacific Northwest garner the most attention, they also occur in Montana, Texas, Florida, and every other state in the union. Because they can be caused by any number of other natural phenomena — storms, seismic activity, volcanoes, even droughts — all that’s needed to set the stage for a landslide is a downward slope with rocks or dirt on it. And those exist all over the country.

That said, most landslides do occur on either the west coast or in hilly, non-coastal eastern states. The are also landslide-heavy regions in Alaska, Hawaii and several mountainous northwestern states, like Colorado and Utah.

A lot of homeowner’s insurance claims to cover “all perils.” That catch-all phrase suggests that buyers will be insured against, well, all sorts of peril, but that’s almost always not the case. There’s a reason insurance companies use such a vague phrase to describe their terms of coverage: Most policies simply don’t cover “all” perils. They cover most perils, and landslides aren’t one of them. As a result, insured homeowners whose houses get obliterated by landslides frequently receive zero compensation whatsoever.

The key is to scrutinize the “exclusions” portion of an insurance contract. That section lists what isn’t covered, and it usually specifically names landslides, earthquakes, and anything else caused by “earth movement.”

Thankfully, it’s usually possible to buy a separate policy rider that covers landslides; in Washington, for $30,000 worth of annual coverage, a landslide insurance rider will set you back about $1,000 a year.

So, how do you avoid landslides? Here’s what the U.S. Geological Survey suggests:

The effects of landslides on people and structures can be lessened by total avoidance of landslide hazard areas or by restricting, prohibiting, or imposing conditions on hazard-zone activity. Local governments can reduce landslide effects through land-use policies and regulations. Individuals can reduce their exposure to hazards by educating themselves on the past hazard history of a site and by making inquiries to planning and engineering departments of local governments. They can also obtain the professional services of an engineering geologist, a geotechnical engineer, or a civil engineer, who can properly evaluate the hazard potential of a site, built or unbuilt.

You’ll notice that all of those tips ultimately come down to one tip: Don’t live in a landslide-prone area. The reason for this is that, in a cruel joke of nature, landslides are more likely to occur in places where they’ve already occurred. So the first step to avoiding a landslide is this: Resist the temptation to buy any super-cheap real estate that happens to be on land destroyed in a mudslide the year before.

Beyond that, certain areas are just more susceptible to landslides. Steep slopes are to be avoided, but even areas with long, gradual slopes can be a hazard if there’s a small, steeper section at the bottom.

Mudslides in particular are more likely to occur where massive amounts of vegetation have been destroyed, usually by wildfire or other human activities, and near steep downhill streams, which facilitate mudflow.