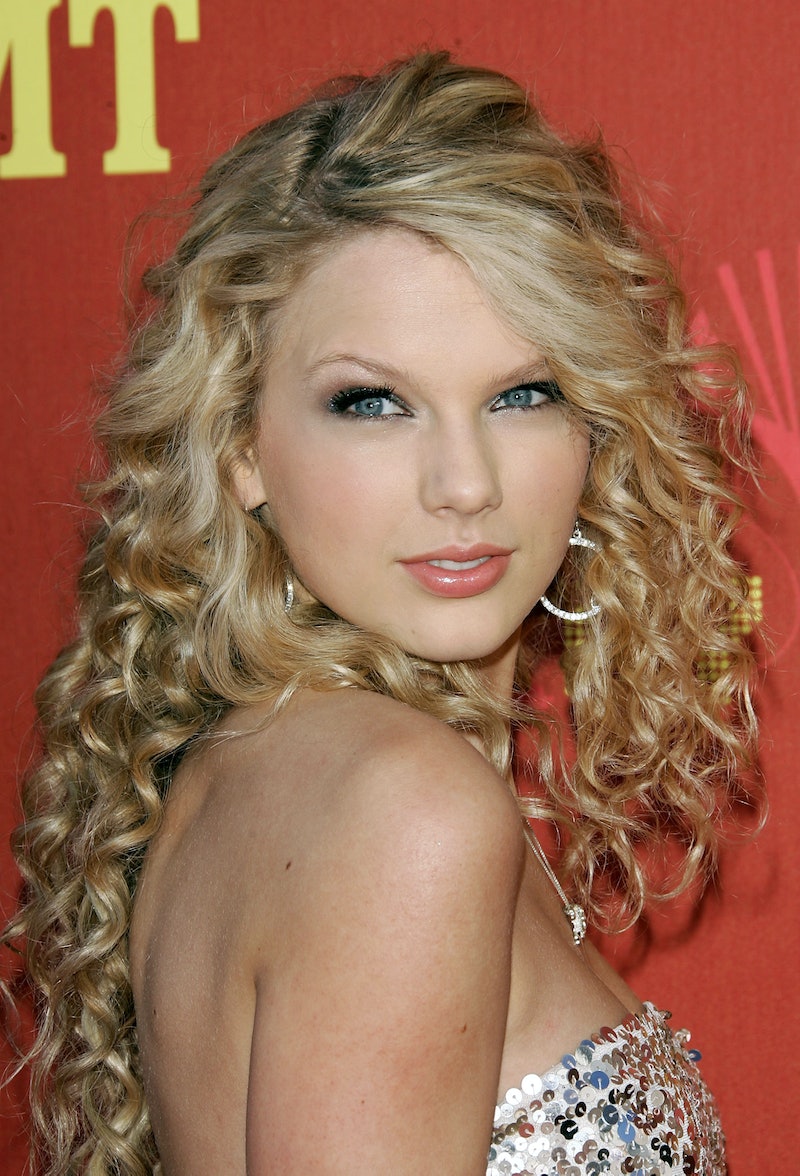 When Taylor Swift released her first self-titled album 10 years ago on Oct. 24, 2006, the world was a very different place. We were still a year away from electing our first black president, the first iPhone hadn't been released, and Keeping Up With The Kardashians hadn't even premiered yet. It was practically a different universe back then, and Swift's career has changed a lot in the past decade, too — something I know firsthand because I've been a Swift fan (never a Swiftie, please God no) since the very beginning. I was still in high school when a friend urged me to listen to "Our Song," promising me that it wasn't that kind of country music. And ever since I pressed play on my iPod Shuffle that day, I've been hooked. But so many things have changed about being a Taylor Swift fan in the past 10 years, and not just the fact that the girl on stage isn't wearing cowboy boots anymore.

In those 10 years since Taylor Swift , her music has seen me through a lot of experiences: high school graduation, college, a move to New York and back home, dating, and getting married. And I think we can all agree that Swift grew up in that time, too — and changed a lot. Swift selling albums and concert tickets at record speeds is basically a given now, but I still feel like a proud mom every time she pretends she's surprised to be accepting an award.

Being a Swift fan has definitely changed for those of us who have been with her since that first album, but I wouldn't trade the years of fun and the friendships it's brought me for anything. And the changes that have happened are obvious, and here are just a few of them.

1. There Are A Lot More Of You

The community of fans used to be a small one, and going to Swift's earliest concerts meant recognizing a lot of the people there from their MySpace profile photos — and yes, MySpace was still a thing back then — because they left comments on her page as often as you did. Now, with the thousands of fans who attend Swift's shows religiously, there are way more strangers — but at least you all have something in common.

2. You Don't Have To Explain Who She Is

There was actually a time in our human history where people would hear me talking about Taylor Swift and ask me who she was — and they wouldn't know who I was talking about until I explained that she was the girl who sang that song about Tim McGraw. Now, she's a household name, so that definitely doesn't happen anymore.

3. But You Do Have To Defend Her

As someone who writes about Swift quite often for work, it's a fairly common occurrence that I get a message from a total stranger on Facebook telling me I'm wrong for being a fan, including the one from this lovely gentleman you see above. And anytime Swift is being negatively portrayed in the media, people ask me what I think about it — especially during the Kanye West "Famous" debacle. At this point, I need to be on her payroll for the amount of time I spend trying to convince others not to believe the hype.

4. Her Stages Are A Bit More Impressive

Pictured above: Me, at my first Taylor Swift show, taken with a 2008 quality cell phone camera. Oh, and it wasn't even a Taylor Swift show. I paid a ludicrous amount of money to see Swift perform eight songs from her debut album when she opened for Rascal Flatts, and I couldn't have been more thrilled. Just Swift in a sparkly dress with a guitar was all I needed, and I had no idea how ridiculously fancy her tours would become in the future. These days, homegirl would not be caught dead performing in front of a simple backdrop with her logo on it. I mean, the 1989 Tour came with a wristband that flashed in time with the music. See what I'm saying?

5. Meeting Her Is Way More Difficult

I have met Swift a few times, in varying ways — regular meet and greets, literally sleeping in line outside for passes, and buying her perfume in exchange for a photo, to name a few. Most of these methods were reasonably easy and inexpensive, if you ask me. But these days, I wouldn't dream of getting close to her unless something truly magical happened... or unless I came into a serious amount of money and was able to bribe the right person.

6. And She Can't Do Quite As Much For Her Fans

In 2009, Swift held a 13 Hour Meet & Greet in Nashville, where she posted up in an area and hugged and took photos with her fans for 13 hours straight. I was there, and it's one of my all time favorite memories, from camping out to get in to seeing the sets and props from her "Fearless" tour to talking to Swift herself. If she tried to do this in 2016, it would be complete chaos and probably impossible. But even if a day like that isn't possible, Swift still does what she can, like communicating with fans on Instagram and Tumblr and even sending out surprise Christmas presents. This one's not her fault — it's just the way it is when you've reached that level of fame.

7. It's A Lot More Expensive To See Her In Concert

This ticket was purchased straight through Ticketmaster in 2009. $52.50 for a floor seat? I paid a lot more than that for a crappy nosebleed at the 1989 Tour on Stubhub, because tickets sold out way too fast for me to buy one. But I can't blame Swift for charging prices that correspond with what she feels she deserves — and what scalpers charge isn't her fault.

8. The Dress Code Has Changed

It used to be gospel to wear a sundress to see Swift — and cowboy boots, if you had them — because that was basically her uniform. And if you didn't have one of those leather "love, love, love" bracelets she sold on her website, you were officially Not In The Loop. Now, at a concert, you're lost in a sea of crop tops. And nobody's taking photos with a sepia filter.

9. It Takes A Lot More To Get Noticed

If you've been to Swift's tours, you've probably picked up on the fact that during the show, her mom and members of her team select fans to meet her after the concert. In the early years, it was called the T-Party, then Club Red, and then Loft '89. I have never been selected for such an experience, but that has never stopped me from trying. Once, it was as simple as bringing a cool handmade sign. Now, you practically have to bring in a flashing, billboard-sized poster with you to get noticed. Above is my attempt during the Red tour in 2013; I'm dressed in a costume Swift wore during the opening songs of the show. At the 1989 tour, I didn't even bother, because I was unable to hire a skywriter.

10. The Way She Interacts With Social Media Has Changed

In the good old days, Swift would update her fans on her life via her MySpace blog, and they were usually entertaining and even a little inspirational. Now, she shares cat videos on Instagram and documents her career here and there, and in recent months has gone way less personal. Don't get me wrong, I will watch Meredith and Olivia be adorable all day, but I kind of miss when Swift would fearlessly share what was on her mind.

And for fans like me who weren't into country but listened to Swift exclusively, this is nothing but good news. This means you don't have to keep the country stations on preset in your car, and you don't have to sit through country openers at her shows. And let's be real: Pop is where she really shines, isn't it?

12. Her Music Videos Are Much Different

Here's the video for Swift's very first single, "Tim McGraw." Can you really compare this to the production value of the video for "Bad Blood"? Back then, I had no idea what I was missing.

It used to be a Big Huge Deal every time Swift made an appearance on TV or sat down for an interview, and you'd rearrange your schedule to make sure you were home to see it (or at least, I would). Now, it's more like, "Oh, there she is again. Neat." Again, not complaining, but it's a testament to how much her fame has skyrocketed since those early days.

Something else that's changed? This could end up being the first time in 10 years she's broken the cycle of a new album every two years if she doesn't release one soon. I'm waiting, Swift — and I will always be your fan, no matter how much things change, and even when my kids ask me to stop playing that old, weird music from 2014 in the car.

More like this
Taylor Swift & Her Mom Clap Back Against The “Shake It Off” Plagiarism Lawsuit
By Jake Viswanath
Sophie Turner & Joe Jonas’ Fave Taylor Swift Album Is Full Of “Bangers”
By Sam Ramsden
Twitter Is At Odds Over Taylor Swift’s Possible ‘All Too Well’ Oscar Run
By Brad Witter
Beyoncé Is The First Woman To Have A No. 1 Album Since Adele Did Almost A Year Ago
By Radhika Menon
Get Even More From Bustle — Sign Up For The Newsletter