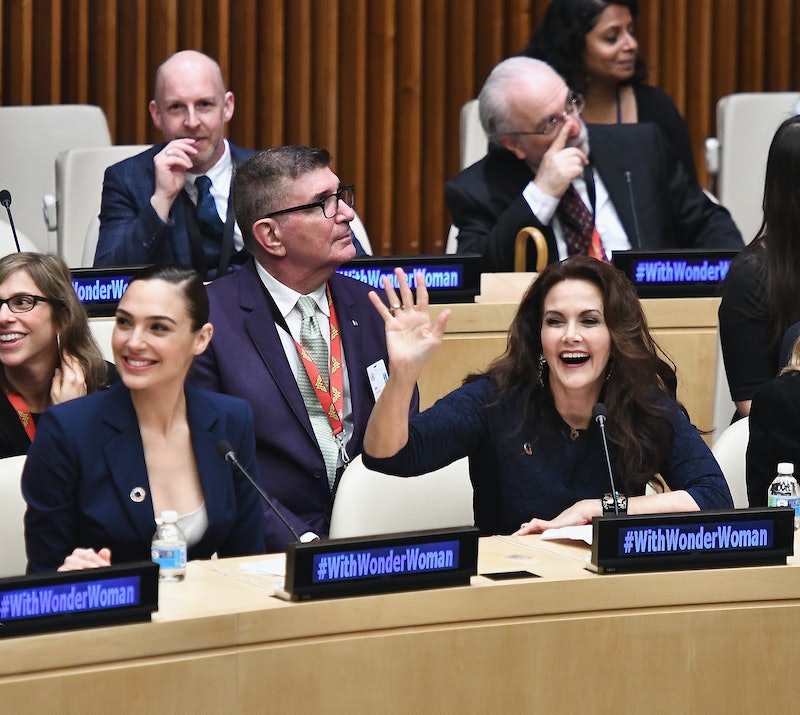 While Lynda Carter delivered her prepared remarks in front of a special United Nations assembly on Friday, Oct. 21, she was also addressing the backs of over 100 silent protesters. The iconic actor was there to represent Wonder Woman, the comic book hero she portrayed on television for four years in the '70s. But not everyone was happy to see Wonder Woman be officially designated an Honorary Ambassador for the Empowerment of Women and Girls, as shown by protesters outside the UN, and Carter spoke directly to those naysayers. "All the doubters who don't think it's a good idea," she said, "Stand up and be counted." They did stand, fists raised in the air, and they stayed there while Gal Gadot, DC film's current Wonder Woman, gave her own equally inspiring speech.

It might not seem like Wonder Woman would be a controversial figure, but her UN ambassadorship has proved her to be just that. On the morning that the assembly took place, The New York Times ran a piece about a petition signed by 600 members opposing the choice of Wonder Woman for this role. "The bottom line appears to be that the United Nations was unable to find a real-life woman that would be able to champion the rights of all women on the issue of gender equality and the fight for their empowerment," the petition reads. That might seem reasonable — until you see that the document also decries Wonder Woman's appearance as a "large-breasted" and "scantily-clad" woman.

Yet while the petition may pay too much focus to the hero's less-important qualities, Carter's speech centered on Wonder Woman's universal appeal and her value as a symbol. "There lies within each of us a Wonder Woman," the actor declared. "She is real. I know this because she lives in me." To Carter and to other women who can find inspiration in fiction as well as in reality, characters like Wonder Woman are tangible examples of strength and compassion.

Carter went on to talk about the letters she's received from fans all over the world —particularly women and girls — who found something in themselves and conquered adversity, thanks to their exposure to the show and to the comics. That's what empowerment can look like sometimes, especially for girls who have more immediate access to television than they do higher education. Are their journeys less important because they looked up to a bracelet-ed superhero with with an invisible plane? No, because ultimately it's what they do with that inspiration that's important.

Some of the language within the petition exposes a lack of understanding of the power of storytelling and worse, a condescension to comic books as a medium and fiction in general. Wonder Woman isn't just a "large-breasted" drawing; she's the first female superhero to impact pop culture in such a massive way. She's a peace-loving icon and a being from matriarchal society. She was co-created by Elizabeth Holloway Marston and her husband William Moulton Marston. As the Marston's granddaughter Christie told Carter, "For Gram, it was all about intellect and attitude." Carter translated that statement into her own words: "Women really know who they are."

That's not to say that there isn't some solid criticism in the anti-Wonder Woman petition. Though Gadot is Israeli and Carter is Latina, Wonder Woman is usually represented as a white woman. In addition, some members of the United Nations are frustrated that seven female candidates for Secretary General were very recently rejected in favor of another man. (Portugal's António Guterres.) It's disappointing that in 2016 the United Nations has never had a woman serve as Secretary General, but that's a much larger concern than the appointment of a fictional character to an honorary post. And to criticize that character for the way her body is drawn and represented reeks of body and slut shaming.

The undercurrent of Wonder Woman's designation is that it's a partnership between the United Nations and DC. DC's President of Entertainment Diane Nelson also spoke at the event, announcing that the image of Wonder Woman would be made available to the United Nations for various empowerment campaigns. One of them will be a comic book that comes out simultaneously in dozens of different languages and will be internationally distributed. Like it or not, entertainment companies like DC have incredible reach and influence; why not utilize that influence to affect change instead of scoffing at it?

Real women should be given every opportunity possible to set examples and empower one another. But fiction should also be recognized as a mighty tool for pulling down cultural barriers. The outcry against Wonder Woman's new United Nations post disregards the potency of cultural symbols, which is especially tone-deaf since the character (created during World War II) is celebrating her 75th anniversary. I'm with Carter on this one. If carrying Wonder Woman along with you makes you more brave and kindhearted then you are without her, no one is allowed to tell you that it's silly or dumb.