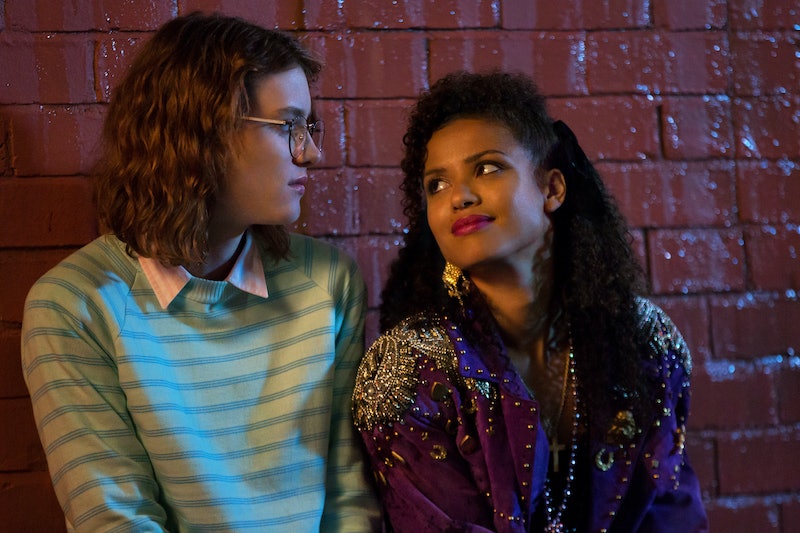 It is a universally accepted truth that an episode of Black Mirror must end with a shocking revelation that leaves viewers with an extreme sense of dread and a general distrust of technology. However, for one brief moment in the "San Junipero" episode of Black Mirror Season 3, technology didn't look all bad. Instead of telling audiences how scientific advances could be used to create horrifying virtual reality experiences or robotic killer bees, "San Junipero" showed that technology can be a beautiful thing, and the episode told the definitively best love story of 2016. Spoilers ahead.

There are a few obvious things in "San Junipero" that differentiate it from other episodes of Black Mirror aside from its happy ending. For starters, it's a period piece — introducing the characters as they meander through the party town of San Junipero (a fictional place created for the series). Yorkie and Kelly meet in a dance club/arcade (how' 80s is that?), and it then becomes quickly apparent that "San Junipero" isn't just Black Mirror's first period piece — it also features the series' first ever gay romance.

For a show that tackles a different narrative each episode focusing on the intersection between technology and human relations, it's interesting that an LGBTQIA+ romance took three seasons to create. Viewers saw stories about dead robot husbands and a prime minister/pig relationship ("Be Right Back" and "The National Anthem," respectively) before the show broached the LGBTQIA+ world. However, in an interview with Entertainment Weekly, Black Mirror creator Charlie Brooker said that "San Junipero" almost centered on a heterosexual couple. "And then I thought, 'Well, what if it wasn’t?'" Brooker told the magazine. Although, the choice was not entirely without purpose. Brooker pointed out, "It gives it an extra resonance because they couldn’t have legally got married in 1987, so we’re gifting them that in this world, in this story of second chances."

"San Junipero" may look '80s-inspired, but as the love story of Yorkie and Kelly travels from the late '80s to the early '80s, the '90s, and even 2002, it became clear that the world in which Yorkie and Kelly live is manufactured. A virtual reality meant for those nearing the end of their lives as an alternative to a spiritual afterlife, San Junipero is an opportunity for Yorkie and Kelly to live their true selves and have a second chance at life.

Yorkie and Kelly's experience with their sexuality differs. Yorkie's tragic backstory was the reality for many LGBTQIA+ youths growing up in the 20th century — disapproving parents who can't stomach having a gay daughter. As if her parents' disapproval wasn't enough, the car crash Yorkie got into while fleeing her parents caused her to live the rest of her life paralyzed. Kelly's story is less tragic, but probably equally relatable — Kelly is bisexual, but it appears that she never had the chance to explore that side of her sexuality until San Junipero. Kelly says that there were "always crushes," but that she truly loved her husband and never acted on her attraction to women until visiting San Junipero. These experiences inform their lives (and their afterlives), but the story is not simply about their sexuality — it's also about the love that grows between them and all the obstacles they face along the way.

Kelly's hesitations about giving herself over permanently to San Junipero come from memories of her late husband. A man she was married to for 49 years, whose daughter died at 39 and never got a chance at San Junipero. He declared that if their daughter never had the option, "Why should I?" Yorkie could have easily chosen to selfishly ignore Kelly's bisexuality — but instead she apologizes, recognizing that Kelly's love for her husband was real and honest, just like Kelly's feelings for Yorkie are now. Like any good love story, Yorkie and Kelly have to fight for their romance. And it seems at the end like it may not have worked. It seems like Kelly has decided that San Junipero isn't for her, and that this story will end in tragedy just like every other Black Mirror episode. But then, Belinda Carlisle starts playing.

In Brooker's great final subversion, the women of "San Junipero" get a happy ending. This isn't just a subversion of the often depressing program, but a subversion of so many stories featuring gay and bisexual women on television. Earlier in 2016, The 100 killed off a main lesbian character, prompting a fan-led investigation into why lesbians and bisexual women kept dying tragically on television. The website Autostraddle even did the math to determine that as of March 11, 2016, 166 queer women characters had died on TV. "San Junipero" does technically kill off both of the episode's queer female leads — but these deaths serve as a passage to everlasting life where the LGBTQIA+ couple gets to be together in eternal bliss proving that, in this case, Heaven really is a place on Earth.

More like this
The First Trailer For 'That '90s Show' Includes So Many Nods To The Original Series
By Jack Irvin, Alyssa Lapid and Grace Wehniainen
The 'Ugly Betty' Cast Just Reunited In The Best Way
By Sam Ramsden
How The Thanksgiving Episode Of 'Gossip Girl' Changed Pop Culture History
By Gabrielle Bondi
Here Are All 703 Outfits Rachel Wore On Friends
By Kat George
Get Even More From Bustle — Sign Up For The Newsletter