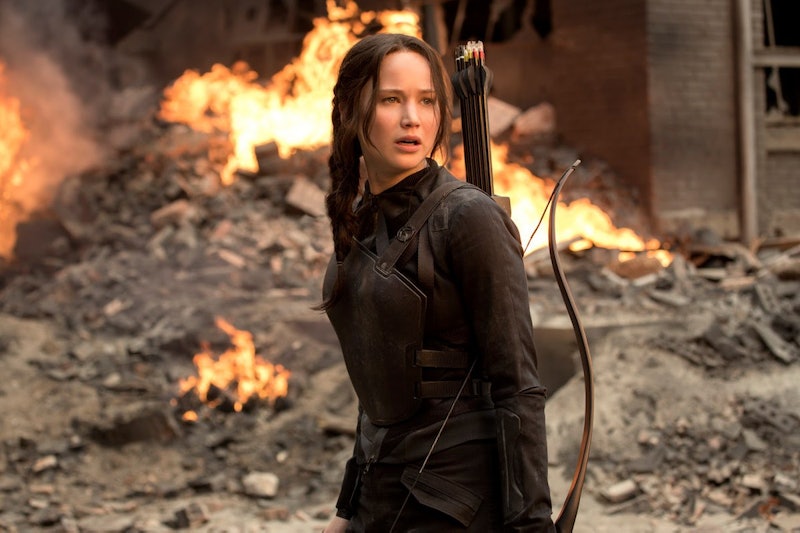 Look, I'm not going to tell you who to vote for, America. I'm just going to tell you to please get out there and vote. And to vote for the candidate who's less likely to tear our democracy apart from the inside with his tiny hands. And maybe also to vote for the candidate who's less orange. Because, if you've ever picked up a novel set in a future dystopia, you know exactly what's at stake in an election like this one. If you need a refresher course, just pick up one of these harrowing dystopian books that remind us why democracy is so very important.

After all, a certain presidential candidate in this election has made it abundantly clear that he's not super into the idea of a peaceful transfer of power which is... pretty much the cornerstone of the whole democracy thing. "But why does democracy even matter?" you might ask, before hopping on your skateboard to skate away because apparently you're a disaffected youth of some kind. Actually, democracy is pretty much the thin filament keeping our society together. Without it, we're headed for a full on Hunger Games-style fascist nightmare-scape.

"So?" you might ask. "The Hunger Games seems pretty fun!" Well... you should maybe review a few of these books:

There's a reason that the word "Orwellian" has become a synonym for "hellishly totalitarian." The world of 1984 is a chilling police state, with its citizens under intense surveillance at all times. If you try to step out of line, the government will swoop down, kidnap your girlfriend, and threaten to put you in a box full of snarling rats. Please vote against totalitarian, snarling rat advocates.

2. The Handmaid's Tale by Margaret Atwood

Women, can you imagine a world in which male government officials try to regulate your reproductive rights? You can? Well, The Handmaid's Tale is the worst possible end goal of that terrifying trend. Women are owned by men, forbidden to read, and valued only as baby-factories. You know, the kind of thing that a democracy full of fairly reasonable people would prevent.

3. The Giver by Lois Lowery

A lot of us probably read this book as kids, before we had fully formed political opinions. Even then, there's a good chance we realized that the "Community" of The Giver wasn't really a democracy. It's a society where individuality is forbidden, lethal injections are par for the course, and life is in grayscale. Yikes. When every citizen has an equal political voice, we can vote to prevent a grayscale reality.

You can't have a truly free democracy without true freedom of information. That means open access to books, accurate news sources, and presidential candidates who don't lie. Bradbury foresees a dark world in which books are outlawed—and any reader will tell you that books are a fundamental human right.

OK, fine, so the ultimate consumer society of Brave New World does seem just a little bit fun at first. Everyone is drugged out of their minds and having lots of creepy sex. But then you start to notice that this society is run by eugenics-supporting World Controllers who keep the people in the dark through drugs and brainwashing. Aww, man. That makes it so much less fun.

Perhaps the most unsettling thing about Ishiguro's dystopia in Never Let Me Go is how normal it seems... unlike most of these books, there's no questioning of authority, no real rebelling against the status quo. There's only characters trying to live as best as they can in a world where certain people aren't considered as human as others.

7. The Hunger Games by Suzanne Collins

Well, of course. Nothing says "democracy is important!" like children beating each other to death for a reality TV show. In the world of Panem, the Capitol controls its twelve surrounding districts, demanding a yearly tribute of one child for the horrifying Hunger Games. No taxation without representation, people! If they're going to demand a child tax, the districts should at least get a representative seat on the Death Council or whatever.

Before there were any Hunger Games, there was Battle Royale. In this authoritarian, alternate reality Japan, high school juniors are forced to fight to the death as part of a government program to terrorize the population. Unlike Collins' version, though, these kids don't even know beforehand that they've been chosen for this "program" until they wake up on a deserted island with metal collars on their necks.

9. A Clockwork Orange by Anthony Burgess

Just to round out the stomach-churningly violent dystopias, there's A Clockwork Orange. Ultra-violence is the latest teen trend, but is the government-mandated "rehabilitation" really all that better? That's up to you to decide. But it's also up to you to vote for a society that does a better job of discouraging murder and sexual assault.

More like this
16 Novels That Paint A Realistic Portrait Of Abortion
By K.W. Colyard
10 Must-Read Books Out This Week
By K.W. Colyard
5 Gripping Books To Read From Women’s Prize For Fiction Winner Ruth Ozeki
By El Hunt
25 Spell Books For Every Type Of Witch
By K.W. Colyard
Get Even More From Bustle — Sign Up For The Newsletter