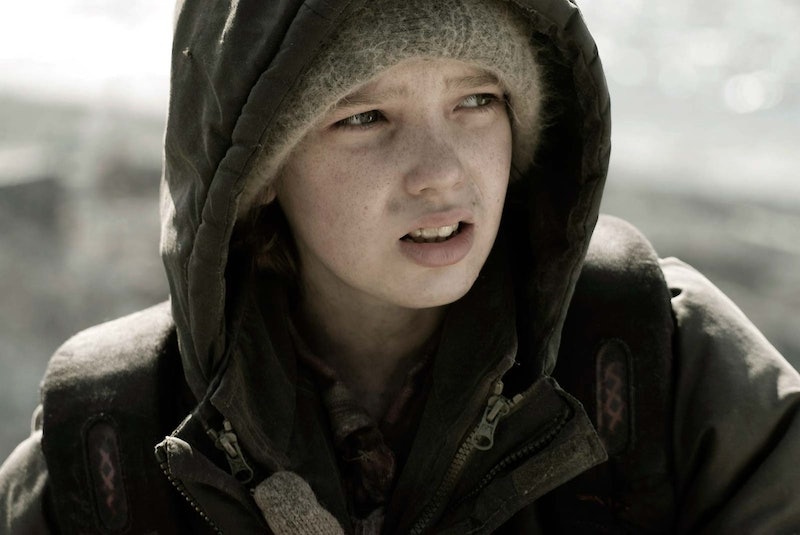 This Halloween, why not ditch all those played-out ghosts, zombies, vampires and ghost-zombie-vampires for something truly terrifying: the near-future tales of dystopian and postapocalyptic literature. Though we're now in our second century of books about how horrible the future will be, the genre remains livelier than ever... probably because the dystopian future seems closer than ever (I can't be the only one who secretly believes that we're ten years away from having to fight each other in the woods while Mark Zuckerberg watches us on a live feed, chuckling softly to himself, right?). We're living in the golden age of dystopian literature... which, OK, may actually not be a great sign about our hopes for the future as a society.

But I don't need to explain any of this to you. I'm sure you, like me, have 35 different books on your reading list right now about teenagers forced to fight each other to the death in an eerie fascist future. So, let's go even further, and broaden our definition of Halloween terrors with the seven truly scary classic dystopian novels below. Each of these tales of the possible future is scarier than The Walking Dead , more believable than a tale about a spooky haunted doll, and more likely to keep you awake at night than some horror movie about a doofus with a chainsaw. I mean, what's scarier than the prospect of totalitarians who control your body, mind, and supply of books? Ghost-zombie-vampires never even stood a chance.

In this literary dystopia specifically crafted to freak out the kind of people who read books about dystopias, Bradbury presents a vision of a creepy future where society is organized around banning and burning books (and watching TV).

What makes it so scary: Even the least alarmist among us feel the suspicion that this is what our world right now might look like, if those people who think Harry Potter books teach 3rd graders about Satanism managed to get in charge.

Watch out for the: Social intolerance, The Hound, your crappy spouse.

Along with Aldous Huxley's Brave New World, this book is the standard-bearer for literary dystopias; it was the one that gave us the concept of "Big Brother," and first presented the concept of a society based around technological surveillance. Also, I need to let you know that there is some app for healthcare professionals called AirStrip One. OOPS.

Why it's scary: This book still packs a punch, more than 60 years after its initial publication — if anything, it might be scarier today, when surveillance has become a kind of accepted part of life that most of us don't even notice.

Watch out for the: Rat cage, the tragic weakness of the human spirit.

THE HANDMAID'S TALE BY MARGARET ATWOOD

Why it's scary: By drawing from the past to sketch out a dystopian future, this book engages with all of our fears about historical cycles of liberation and oppression. Also, it feels like this book is probably what the dream journal of certain reproductive rights-averse political officials looks like.

Watch out for the: Sudden devastating political coups, Serena Joy.

READY PLAYER ONE BY ERNEST CLINE

In this ultimately very sweet and uplifting book, video games present an escape from the corporate militarized hellhole that is America in 2044, where declines in fossil fuels have led to increased economic disparity and people living in "stacks" (actual trailers stacked horizontally on top of each other). Everyone has correctly decided that this sucks, and that it's better to live inside a lush, exciting and beautifully detailed MMORGP.

Why it's scary: Can't you kind of imagine us all living in enormous piles of humanity and playing World of Warcraft all day in 30 years? Also: drones.

Watch out for the: Sixers, those ostriches in the game Joust.

We can argue until the cows come home about whether this book provided most of the inspiration behind The Hunger Games (and if you get a few beers in me first, I will have that argument with you). But literary controversies aside, this 1999 novel's chilling vision of a alternate reality Japan, where middle school students are forced to fight each other for the death on an isolated island to keep the public paralyzed fear, is a real gut-churner.

Watch out for the: Exploding metal collars locked around your neck, classmates you never really liked.

In Vonnegut's hands, a substance that turns water into a solid at room temperature, combined with the worst parts of the human ego and organized religion, inevitably results in the kinda-sorta end of the world.

Why it's scary: This book is extremely funny... but not so funny that you don't end up wondering what potentially world-ending scientific innovations are being made in some lab, right now, while you read this and eat a Hot Pocket.

Watch out for the: The giant hook.

CHILDREN OF MEN BY P.D. JAMES

In the not-too-distant future, sudden mass infertility has turned pretty much everyone (especially "young" people) into assholes and the government into a totalitarian nightmare.

Why it's scary: I think this is actually a pretty tame vision of what people would act like if they couldn't have children any more, frankly.

Watch out for the: Omegas, the horror of the human condition, pet christenings.

THE ROAD BY CORMAC MCCARTHY

Hey, is there too much hope in your day-to-day life? Then try this improbable Oprah's Book Club pick on for size. One spin through this dark tale about cannibals, infinite sadness, and the end of the world, and you'll agree: mankind is doomed and we should probably just all jump on that "living in stacks and playing video games all day" thing.

Why it's scary: EVERY SINGLE THING IN THIS BOOK.