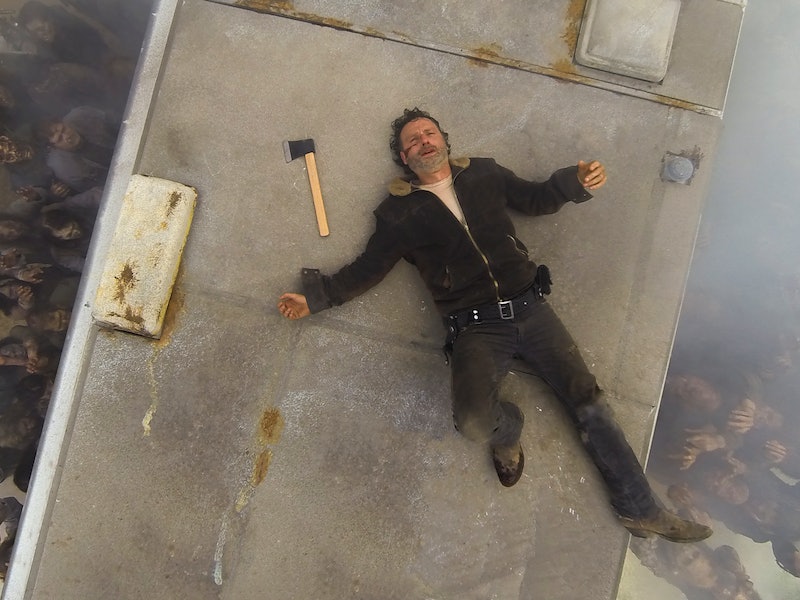 By now, you've probably either seen or read what happened on The Walking Dead Season 7 premiere — but if you have stumbled here by accident, there are spoilers for TWD ahead that you may want to avoid. Though fans knew a major death was coming, in the wake of “The Day Will Come When You Won’t Be,” it seems that that The Walking Dead may have gone too far with Negan? The reactions to this episode are unlike anything I've seen, for TWD or really any single episode of television, before.

A common defense of the show’s violence is that by watching it, fans are buying into the premise of a bloody apocalypse where anyone can die, and therefore shouldn’t complain when they do. In an interview with Entertainment Weekly, director Greg Nicotero said that he thinks the violence is justified because it gets Rick to that helpless state. "To me," he said, "what struck me about [Glenn's death in the comics] was it was horrifically graphic and senseless and brutal.… In this instance, we felt that it was important to launch us into this season by showing the extent of what Negan is capable of doing. Because that drives so much of where the series is going from here on in."

Since Negan kills Glenn in the comics, it's safe to say that almost everyone in AMC's audience knew that this was a possibility, and I'm not even mad that Abraham was killed first in what was likely an attempt to make Glenn’s TV death more surprising. I even understand wanting to recreate the infamous panel from the comics where Glenn's eye is bulging out of his head mid-beating. But then it went nuts.

Then it was Negan mocking his victim's half-dead gurgling. Then it was threatening Carl with no payoff. Then it was a walker taking a sip from Glenn's blood pool. Then it was a fantasy scene to the group enjoying a moment of piece and Glenn holding the child he will never meet. If I wanted an alternate universe, I'd read fanfiction or watch The Flash. This was just kicking fans while they were down.

The critical response to this episode is as negative as fan reactions, if not more so. As Matt Zoller Seitz pointed out in his review for Vulture, "the brutality was nearly eroticized, with loving inserts of the villain’s bloody weapon, lingering images of hostages’ tearful, terrified faces and low-angled shots that made Negan loom like a conquering badass hero as he pwned the hostages." He goes on to describe the show as having an abusive relationship with its fans, and I am wont to agree. David Sims, senior associate editor of The Atlantic, argued that The Walking Dead is just punishing its audience now. How can we take any other message from this?

It's not just the fact that Glenn died, a character who will be near impossible to satisfactorily replace on this series in terms of morality, racial diversity, and as a romantic lead. That's not the only thing that makes me question whether or not TWD is in trouble. It's the fact that the episode had the audacity to flash forward and keep its audience dangling for 15 more minutes before revealing the victims. It's that Negan went off the meta rails and asked Rick to "think about what could have happened, think about what happened, and think about what can still happen" — so, basically, Rick had to come up with his own fan theories like the rest of us and in the process, make viewers watch imagined scenes of the rest of his group being hit with Lucille. It's that we went into the literal garbage with Glenn only to have this happen. It's that I'm sitting here on the Monday after, relieved that I'm not writing about the brutal murder of a black woman, or a pregnant woman, or a gay man being used as a way to shock viewers and separate a TV show from its source material. As if the fact that the non-white character who was brutally killed was killed the same way in a comic book made it better.

What sucks for the fan half of me is that the writer half of me gets why the team behind The Walking Dead would want to exert their metanarrative control over the story in some way. I don't think any of us really want our shows, books, and films to cater to every fan demand. I understand the instinct to say "we're not keeping a character alive just because you like them." Honestly though, and you can't get mad at me for putting this into the universe because it's not what happened, a more effective way to achieve that goal would have been killing Daryl.

Speaking of, if Negan did indeed kill Glenn because Daryl acted out, then why kidnap him? Wouldn't it be smarter to let Rick and his group turn on Daryl? Why did Negan drive Rick away in a van to fight walkers in the mist for what seemed like hours while everyone else just sat still? I don't want to act like I can Big Bad better than Negan, but so much of this does not add up. With so many dangling threads, it's difficult for me to not conclude that the premiere neither satisfied the cliffhanger nor justified itself in the story. It's just gore and shock and being yanked around for fun.

We don't need a reminder that the humans are a bigger threat than the zombies on The Walking Dead. That has been established through the Governor, Terminus, the hospital, and the Wolves, just to name a few. I know that I'm supposed to find Negan as charming as he is horrifying, but I don't. One episode wore me out, and there's another two years of this at least, now that The Walking Dead has been renewed for Season 8. I'm still interested in seeing what happens next with the remaining characters, but a big hunk of my emotional investment died with each of Lucille's blows that I don't think I'll ever be able to recover.

More like this
Stranger Things Fans Really, Really Hope These Characters Will Survive Season 4 Volume 2
By Grace Wehniainen
'Stranger Things' Season 4 Volume 2 Trailer Teases New Episodes Coming July 1
By Grace Wehniainen and Gabrielle Bondi
Regé-Jean Page Spoke Out On His Rumoured 'Bridgerton' Return
By El Hunt and Maxine Harrison
Everything To Know About 'Industry' Season 2 on HBO
By Radhika Menon
Get Even More From Bustle — Sign Up For The Newsletter