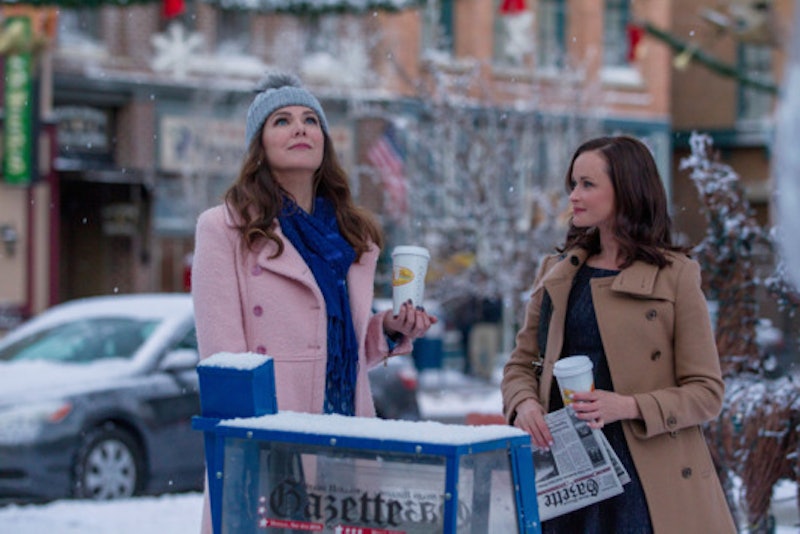 The 90-minute episodes of Gilmore Girls: A Year in the Life won't be arriving to Netflix queues until after Thanksgiving, but here's a little something to keep you occupied in the interim. No, not the Gilmore Girls teaser that was released in July. Instead, Netflix released an extended look at the four seasonal episodes that will allow fans to dive back into the lives of Lorelai and Rory Gilmore. I'm talking about the Gilmore Girls: A Year in the Life official trailer, which just dropped on Tuesday, Oct. 25. You've been Gilmored. (Again.)

The Gilmore Girls revival will premiere on Nov. 25, a day otherwise known as Black Friday. While others are out shopping in the cold, you can marathon the episodes and ignore the crowds of people. As you adhere yourself to whatever couch or chair or bed you can find, the girls of Gilmore will be taking you through each of the seasons in Stars Hollow. Thanks to Amy Sherman-Palladino sharing the script's first page with Entertainment Weekly, loyal fans already know where things will begin — with Rory looking like an angel post-plane ride and Lorelai bringing up the lifestyle brand, Goop. (Sadly and confusingly, there's nothing about poodles. Oy.)

Now, this trailer gives fans an even better idea of where things could be headed for the familial pair. By the looks of it, it's somewhere good, presumably with coffee.

What else will happen in the four episodes? Besides an insane amount of pop-culture references and lots of junk food, wit, and disapproval from Emily Gilmore, it's tough to say. However, during the four episodes, one thing will remain clear. Wherever the Gilmore girls lead, fans will definitely follow.