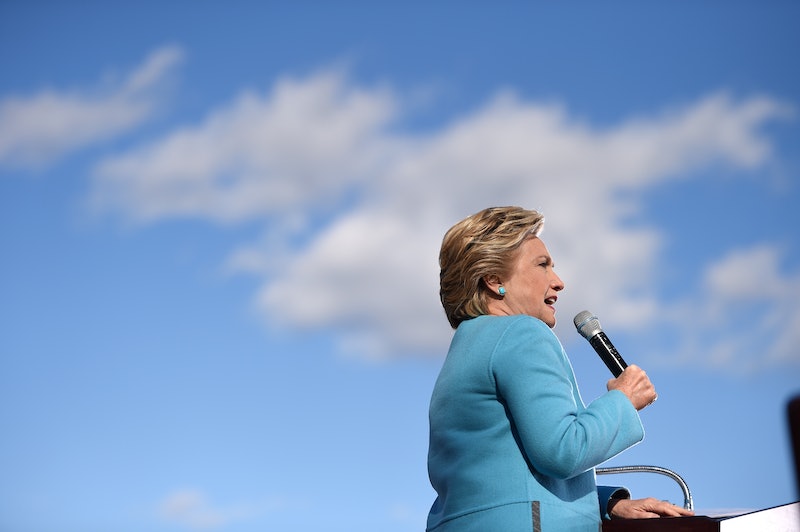 Donald Trump attempted to deliver a devastating argument during the last debate about one of the bigger, and perhaps more legitimate, criticisms of the Clintons this election season. He questioned donations from places like Saudi Arabia and Qatar: "These are people who push gays off of buildings," he said. "These are people who kill women and treat women horribly, and yet you take their money." Obviously that first example is ISIS, but perhaps Trump does have a point. How much should Clinton Foundation donations from anti-LGBT, anti-women countries bother us? That's probably a question only you can answer for yourself.

For me, I don't think it was particularly smart, given the optics, but I also don't think it undermines Hillary Clinton's ability to be an independent thinker on foreign policy. And it certainly doesn't disqualify her from serving for president. If and when she is elected president, the Clinton Foundation has said it will stop accepting foreign (and corporate) donations. That's a great decision — and it probably should have been made when Clinton began serving as Secretary of State. But that didn't happen. So how do we make peace with the past policy?

Clinton surrogates would point out all the good things that the Clinton Foundation does. James Carville, one of the Clintons' longtime advisors, said "somebody is going to hell" over the accusations because all the good things that the group does could be limited by fewer donations. Take the Clinton Foundation's HIV prevention and treatment programs. They're huge, and have made an enormous difference in the lives of millions of HIV-positive people around the globe. And using Saudi money to fund these programs seems kind of like poetic justice given how they treat their own people. But that's still not a good enough reason.

So if all the good they do doesn't balance out the source of the funds, why doesn't this bother me more? Well, all the countries that donated are military allies of the United States or are in "close cooperation" with the United States on security issues. For example, Saudi Arabia is an ally militarily. According to the 2016 Index of U.S. Military Strength, there are still military assets based there. It's not like North Korea donated. Qatar, the United Arab Emirates, and Kuwait — all countries that donated to the Clinton Foundation — are also home to U.S. troops. So in theory we should consider them our friends already — regardless of whether they donate to the Clintons. So, yes, it's true that they all have pretty bad records on LGBT rights and to varying degrees they have less-than-stellar laws for women's rights, too. But yet they're still our allies.

So is it good that the Clinton Foundation took foreign money? No, but I don't think the Foundation should get attacked more for taking money from Saudi Arabia than from Italy or any other ally. If you find that problematic, then the real thing to complain about would be our foreign policy. You could argue it should take human rights into more of an account than security or oil. And you can do that. But I'd argue you shouldn't take it out on the country by reconsidering your vote for Clinton.

More like this
Your Daily Horoscope For August 16, 2022
By Alexandria Lettman
All The Celebrity Relatives Revealed On 'Claim To Fame' So Far
By Brad Witter
15 Times Charlotte York From SATC Was Preppy Perfection
By Allie Fasanella
The 4 Best Cat Repellent Sprays For Furniture
By Masha Vapnitchnaia
Get Even More From Bustle — Sign Up For The Newsletter