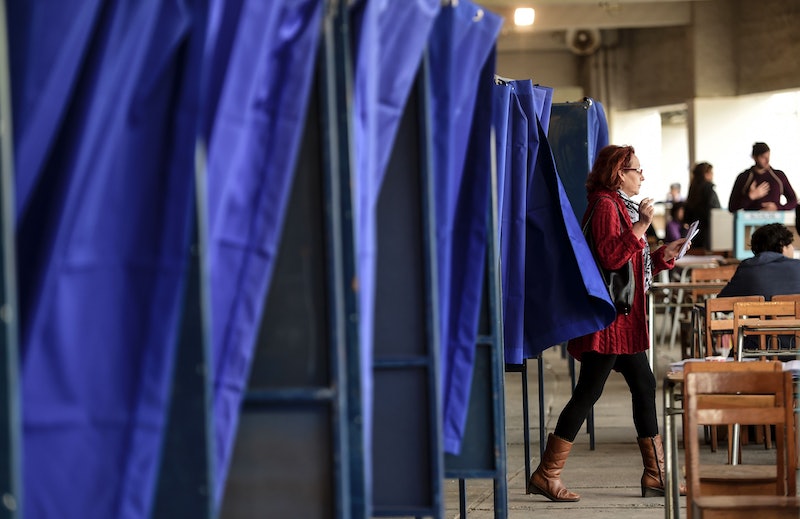 The 2000 presidential race ended in one of the most dramatic and unsatisfying ways of all time (if you were an Al Gore supporter, at least), with then-Texas governor George W. Bush winning the presidency through the electoral college despite losing the popular vote. And that's why some people continue to want reform. If you're unsure of what the National Popular Vote Interstate Contract is, you might ultimately find it's something you'd like to see enacted.

Of course, that all depends on your feelings about the electoral college. If you've followed any presidential election before, you probably know the drill. There are 538 electoral votes overall, and a candidate has to secure 270 of them to win the White House. Back in that hotly-contested, controversial 2000 election, the Supreme Court's decision in Bush v. Gore finalized a 272-electoral vote victory for Bush, despite the fact that he trailed Gore by more than 500,000 votes nationwide.

And, sad to say if that strikes you as just plain wrong, the electoral college is laid out in the U.S. Constitution, meaning it couldn't be amended or changed without the support of two-thirds of both houses of Congress, as well as three-fourths of America's state legislatures. And that's where the National Popular Vote Interstate Compact comes in.

Basically, it's a clever attempt at an end-around on the electoral college ― rather than facing up to the virtual impossibility of marshaling the support necessary for a Constitutional amendment, the plan is for individual states to pass legislation dictating that their electors vote to support the winner of the national popular vote, rather than the winner of their state.

The reasons to support such a cause don't end just at mitigating the electoral college ― it's also about changing the nature of American presidential campaigning. As it stands now, the presidency hinges on a handful of familiar battleground states every year, while dozens of states across the country get little to no attention because their outcomes are taken for granted. Here's how the National Popular Vote website describes the dilemma:

Because of these state winner-take-all statutes, presidential candidates have no reason to pay attention to the issues of concern to voters in states where the statewide outcome is a foregone conclusion. ... Two-thirds of the 2012 general-election campaign events (176 of 253) were in just 4 states (Ohio, Florida, Virginia, and Iowa). Thirty-eight states were ignored.

Basically, if enough states passed the bill, binding their electors to the national popular vote ― enough states to cross that golden 270 electoral vote threshold on their own, regardless of which way the other states' electors go ― then American elections would effectively be decided by the popular vote. Assuming, of course, that the laws held up in the face of the virtually inevitable court challenge, since the states empowered by the current battleground status quo (mainly swing states and less-populous states) wouldn't be enthusiastic about it.

As it stands now, 11 U.S. states have signed on to the National Popular Vote plan: California, the District of Columbia, Hawaii, Illinois, Massachusetts, Maryland, New Jersey, New York, Rhode Island, Vermont, and Washington. Combined, these 11 states amount to 165 electoral voters, 105 short of the point they'd be able to guarantee victory to the popular vote winner. Also, it's important to note that the compact between these states doesn't take effect until that electoral vote majority is ensured. In other words, if there's a situation like 2000 this time around, they'd still award their electors like usual.

It's a fascinating proposal, but it faces a big uphill climb, to say nothing of the fact that its legality is disputed. But this much is clear: If you're hoping to see the presidency decided by national popular vote, this is probably the only way that carries even a shred of possibility.