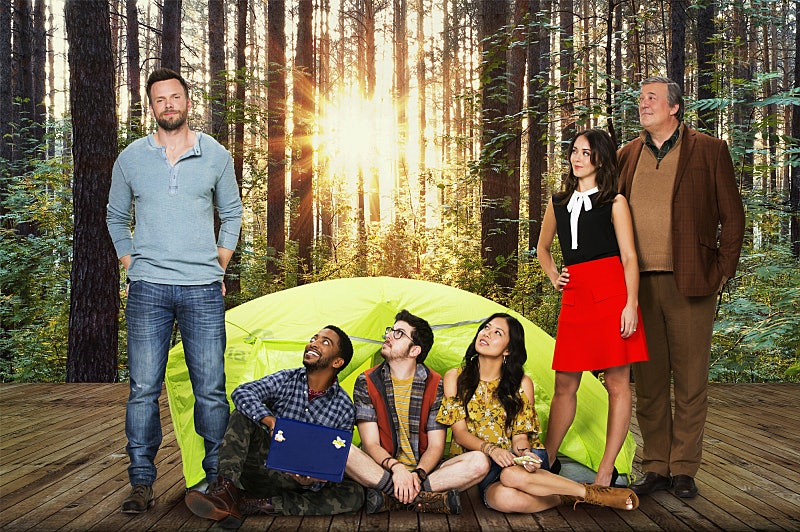 In CBS' new series, Joel McHale is once again playing the brash, confident leader of a group of millennials... a job he's not exactly thrilled to have. This time, he plays Jack, an adventure reporter for the magazine Outdoor Limits on The Great Indoors . Jack lives his life on the edge in a "Bear Grylls" kind of way — in other words, daring adventure is in his blood. Only it seems that the magazine's founder, Roland (Stephen Fry), sees Jack's adventure going in a different direction. So when the magazine moves to a more digital and modern platform, it's out of the woods and into the life of desk duty, as Jack becomes a supervisor for a group of young journalists.

We get it — Jack isn't happy. And Jack really wants to contribute to the magazine the way he's used to. And why not? He was obviously a great reporter with a zest for adventure, and Outdoor Limits really benefited from his stories. Unfortunately, you won't be able to read such stories in Outdoor Limits, as the magazine doesn't exist outside of the CBS series.

But what if it did? Maybe Jack could get his job back by pitching some of these "out there" stories to his boss. It's worth a shot.

Surviving The End Of The World: How And Where To Do It

One of Jack's "recruits" is a man named Clark (Christopher Mintz-Plasse), a friendly tech nerd who knows everything about how to survive a zombie apocalypse. Since Jack has traveled the world and lived to tell about it, he clearly knows all the best places you could run away to. So what about a story about the best places to run to, should a zombie apocalypse happen. Where could we survive, if not our own country? How could we survive? I mean, really, do we put it past Jack to use other people's stories and knowledge in order to push himself forward? Probably not.

Paintball And The Great Outdoors

Jack isn't Jeff Winger. But that doesn't mean the ghost of Jeff Winger can't find its way into Jack's mind and give him some inspiration. Community became known for its paintball episodes, and, well, what's more adventurous than paintball in the wild? Why not take a journey the desert or somewhere equally secluded, where the elements aren't that kind, and stage a group of people to play paintball for a week while living on their own and exploring?

A Week In The Wild: The Real Stories Of Real Journalists

Alright, Jack. Take your employees into the real world and see how long they last when they're not surrounded by computers, phones, or televisions. I'm not saying that Jack should be unnaturally cruel and leave them to their own devices somewhere that's actually dangerous, or where an animal could come and attack them. But maybe having the kids he's not a fan of "parenting" out in the not-so-wild wild where he can teach them a few things would be a good feature for Outdoor Limits. There could be rafting, hiking, bicycling, sightseeing, and more. It will also help bridge the gap between the younger workers new to the company and the older, more seasoned veterans. And Jack can have his old job back... kind of.

Think it over, Roland. We'll be waiting for your response.