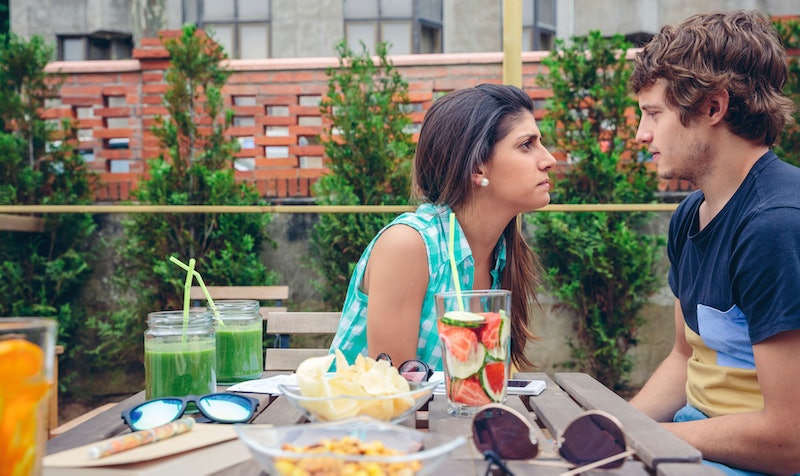 When it comes to breaking up with someone, it can be impossible to know how to do it correctly — if there's such a thing. We all know the basics. "Don't do it by text or by post-it!,"relationship therapist Aimee Hartstein, LCSW tells Bustle. "Today's dating and communication has gotten so 'casual' that people do not always treat each other the way they themselves would like to be treated. My number one tip for breaking up mindfully is to do it clearly and directly."

But beyond that, it gets a little more complicated. OK, a lot more complicated. You want to be mindful of their feelings, you want to be clear, you don't want to cause a scene — and no way that you think of can feel quite right. Do you do it at home so they have privacy, but might feel trapped? Do you do it in public, where they can go off on their own but might feel self-conscious? I've never really been sure.

It's not going to be easy, but it also doesn't have to be a disaster. Remind yourself that you're doing it for a good reason and that will be your anchor. "There is an art to breaking up with someone," Audrey Hope, a celebrity relationship expert, tells Bustle. "If you do what needs to be done, you can sail through it." But once you've got the headset down, what about the details?

What's The Best Setting For A Breakup?

So how and where do you do it? There's not a hard and fast rule that always has to be followed. You know your partner, so think about what would best for them and make them the most comfortable — while still allowing you to know what you need to do. But even though no two people are the same, there's a general rule that's helpful to bear in mind. And it's all about respecting each other.

"I think in private is more comfortable and respectful," Hartstein tells Bustle. "People sometimes choose public so the other person can't make a scene. But I don't think that most people really do make a scene when they are broken up with. They might be sad or cry or be angry, but most likely they will just want to talk. And if it's a relationship of more than s few months, an involved talk or discussion is pretty warranted. You can both get closure that way."

I have to agree. Not only do you get a chance for a proper conversation, but having some private space to be upset without feeling like everyone in the coffee shop is staring at you is definitely the way forward. Nobody wants to be that person.