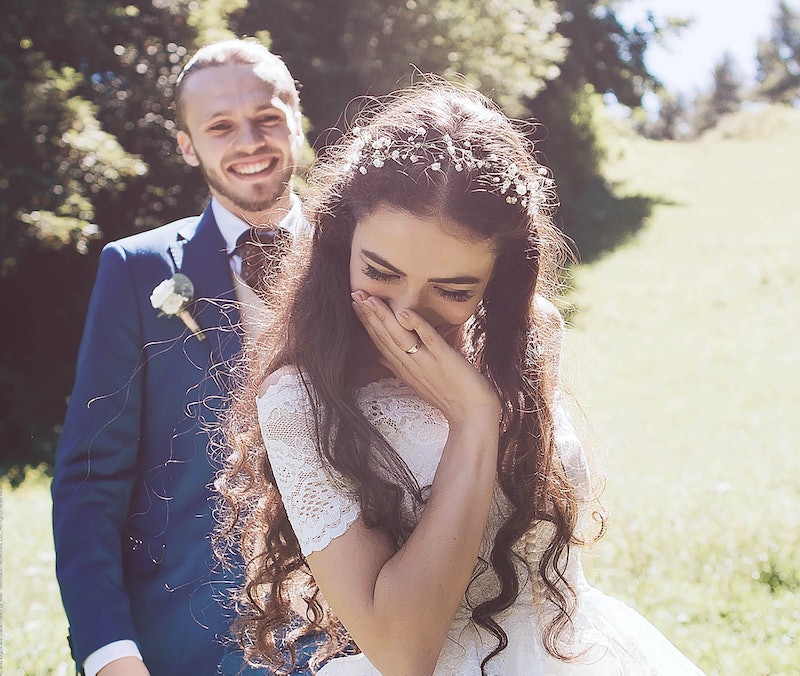 It must have been love at first sight for FYI, because the network has renewed its hit series Married At First Sight for Season 5, according to Deadline. The popular reality show follows singles looking for love, who agree to officially marry someone picked for them the first time they meet them. The series then follows the newlyweds as they learn to live with each other and forces them to eventually face the all-important question: Will they stay together? Or will they divorce? The Season 4 finale has already aired, and its reunion show is on Tuesday night. As it draws to its close, some fans may wonder when MAFS Season 5 will premiere to bring all-new drama to their screens.

According to Deadline, the new season takes place in Chicago, but will not air until some time next year. Although there is not yet a date, the show could make its debut in July 2017, as both Seasons 1 and 4 premiered during that period. So, fans will have to wait several months before we see our newest couples take the plunge into true love. Can't wait? Don't worry: I've rounded up some other show options for you to tide you over until 2017.

If you're a fan of people meeting at first sight and getting married with no questions asked, you might find joy in the VH1 series that's just what it sounds like: Singles who meet in the nude and then decide, after a series of dates, whether or not they've found their one true love.

Are You The One?

MTV's popular reality series follows 20 people who live together on a tropical island. The concept is sort of like Real World, except it's a little more romantic: The singles have to pair themselves with who they believe is the perfect match for them. And if, in 10 weeks, they choose all 10 perfect matches for each other, they win $1 million dollars to split among them. It's more Bachelor than Dating Naked, but it's still entertaining to watch people try to find their perfect match. And, if it's any incentive to watch, the first two seasons saw all its members winning the full $1 million, which means there's some method to the magic.

Do you like watching C-list celebrities compete for each other's hearts, with a little (or a lot) of drama to match? Then Famously Single is the show for you. Find your inner cupid as celebrities like Pauly D, former Bachelorette castoff Josh Murray, and Real Housewives of Beverly Hills’ Brandi Glanville go through some intense relationship therapy under the wing of Dr. Darcy Sterling, relationship expert. Come on, if you've read this far, you really don't need more than that to garner your interest... right?

Match Made In Heaven

The WE tv series, which just earned itself a second season, puts 18 women under one roof. The challenge? Compete for the heart of former NFL linebacker, Stevie Baggs. The greater challenge? Impress a series of judges, including Pastor Ken Johnson, who oversees the women's living situation, and The View's Sherri Shepherd, Baggs' mother and host. Hey, there may not be roses here, or naked ladies, but there's spirituality and sass instead.

Of course, no list would be complete without ABC's rose-filled Bachelor series and its many spinoffs, which take one romantic interest and gives him or her a number of contestants, all who try to win the hearts of their suitor over a period of dates and grand gestures. The drama is just what you'd expect from women (and men) looking for true love, but the stakes are as high as the tensions. After all, if you take a man home to meet your family and friends, he better be the one for you.

So, until MAFS returns, there's plenty of love in the air... or, rather, on the air.

More like this
Only 3 'Married At First Sight UK' Couples Are Still Together
By Bustle UK
You Can “Fall In Love” At The Resort Where Bachelor In Paradise Season 8 Was Filmed
By Brad Witter
The 'Bachelor In Paradise' Schedule Shifts To 4 Hours Every Week After The Season 8 Premiere
By Brad Witter
‘The Ultimatum: Queer Love’ Is Officially On The Way
By Radhika Menon and Kadin Burnett
Get Even More From Bustle — Sign Up For The Newsletter