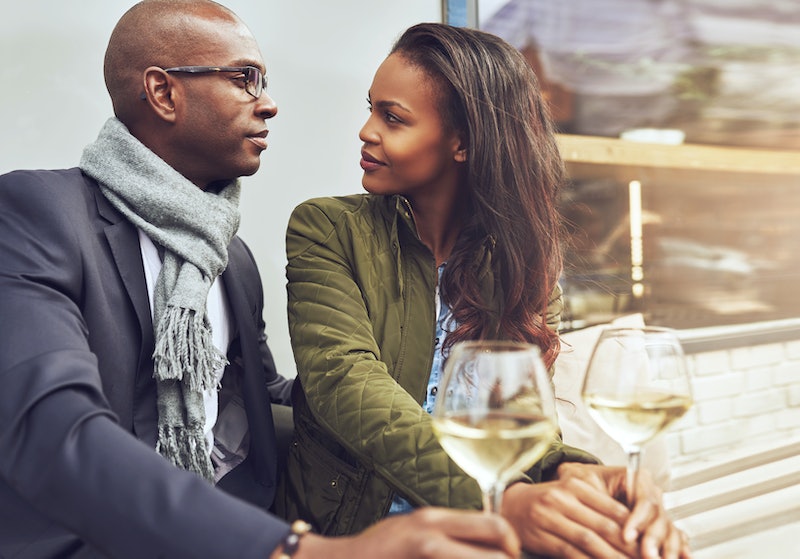 Trust is typically considered to be a foundation of every successful relationship. If you can’t trust your partner, why bother? No one is worth the downward spiral of paranoia you’ll fall into trying to catch your partner in a lie. While some will say it’s OK to lie to your partner at certain times, a new study has found, that’s probably not the best idea. Because even the smallest lies can lead to problems. According to a study published in Nature Neuroscience, telling small lies can desensitize our brains and encourage us to tell bigger lies in the future.

"Small lies are not small. Small lies are big lies,” celebrity relationship expert, Audrey Hope, tells Bustle. “If someone can venture into this territory or can stick their toes into a place of untruth, then lying is their ‘thing.’ Their relationship was not built on integrity, and therefore will not survive.”

Researchers from the University College London conducted a study of 80 people in order to see what happens to our brains when we lie. During the study, participants' brains were scanned as they completed tasks that would allow them to “lie for personal gain.” Each person person was put into a team where they had to guess the number of pennies inside a jar. They were then told to send their guesses to an unseen partner through a computer. Participants were told to do the same thing multiple times for a variety of scenarios. For instance, in one scenario they were told that the most accurate estimate would benefit both them and their partner. In another scenario, they were told over or underestimating the guess would benefit them at their partner’s expense, and so on.

Brain scans found that when people lie for personal gain, the amygdala becomes most active and produces a negative feeling. In other words, we're not necessarily hardwired to be liars. However, as the person continued to lie, the amygdala’s response to lying declined.

The more a person lies, the more desensitized they are to dishonesty. That of course, can only spell trouble for relationships. “Too many small lies in a row can create a flashing red light when it comes to honesty in general,” New York–based relationship expert and author, tells Bustle. “It’s one thing to fudge your age or say you like someone’s outfit when you don’t, but when you do those things AND don’t tell the truth about where you are, when you’ll be home, who you’re with, what you’re doing, how long you’ve been doing it and…. well, you get the picture. One or two of those fibs is one thing, but when the truth becomes a hobby and not a rule, you’re going to create trust issues in a relationship.”

So the general idea here if, if you’re OK with telling a small lie, chances are you’ll be more than OK telling a big lie in the future. So, what are some small lies you definitely should avoid? Here’s what experts had to say:

1. “I Don’t Have Money Issues. My Credit Score Is Excellent.”

Studies have found money issues can be an even bigger relationship struggle than cheating. According to Masini, lying about money is tricky because finances in relationships are so important. “If you lie about your salary, your debt, or your spending habits, prepare for problems,” she says. “It may seem like a little lie to fail to disclose a student loan or the real mortgage amount you owe, but when you’re seriously involved with a partner, this affects them and their finances. Don’t lie about money — and if you’re even thinking about it, ask yourself what it is you’re afraid of disclosing, and why.”

Whether you keep in touch with your ex or not is really up to you. That's really not the the problem here. The problem is whether or not you’re keeping that communication secret from your current partner. “It shifts the dynamic," Gestalt life coach Nina Rubin tells Bustle. "If the other partner finds out, the truth breeds mistrust and suspicion. Even if it seems difficult to talk about—when exes talk—it's better to reveal this to the new partner.”

“I believe that one of the most damaging ‘small lies’ a person can tell is, ’It doesn't bother me,’” relationship coach Whitney Tillery tells Bustle. If there’s something that your partner does that bothers you and you don’t say anything in order to avoid an argument, you are slowly creating a much bigger issue that will explode down the line.

“Pretending that what your partner does that is bothering you is OK will only manifest later during an argument from something that is nine times out of 10, totally unrelated,” Tillery says. “It might seem so small and minuscule, but that one small lie can destroy your relationship.”

Additionally, failing to say anything at all in order to preserve your partner’s feelings falls under the category of lies of omission. “I know a couple who had been together for 18 months before she told him she didn't like how he kissed,” Sex, Kink and Intimacy Coach Rebekah Beneteau tells Bustle. “When you realize you have been operating under an untrue assumption, in this case that she liked making out with him, you feel like a fool. Like, How could I have not realized? I also know another couple who fought for 20 years because he waited five years to tell her he preferred a different type of mayonnaise.”

It may not seem like a big deal—like who really cares about mayonnaise anyway, right?— but these “small lies” can make your partner feel silly if they ever found out the truth. That feeling of being lied to can carry on to future arguments, which again, may be totally unrelated.

4. “I Totally LOVE (Insert Something Your Partner Loves Here).”

These are called lies of commission. This happens when you go along with something your partner wants when inside you secretly hate it. Who hasn’t done that before, especially when you start dating someone new? You want to impress the person you like by showing how cool and awesome you are by liking the same things as them. “This creates distance, which can eventually lead to difficulties," Beneteau says. "We tend to resent someone that we don't feel we can tell the truth to.”

Kids aren’t for everyone. If you don’t know if you want kids or not, don’t set the expectation of possibly having kids in the future to your significant other. “You need to be honest and say, ‘I don't know if I want kids,’” Rita Delgado owner of adult store Shades of Love in San Antonio tells Bustle. “While that might put you both in the uncomfortable position of having vastly different life goals, it's a critical conversation that not only affects your lives, but the lives of future little you's down the road and vice versa. If you do or don't want to have kids, you need to say that and stand firm. The more honest you are, the better your relationship will be. If your partner doesn't share your beliefs, then you can talk about it.”

Also known as the orgasm lie. “One of the small lies that comes up most often in my work is the ‘orgasm lie’ or leading your partner to believe that you enjoy a particular sensation more than you actually do,” Kim Sedgwick, co-founder of Red Tent Sisters, a business dedicated to women’s reproductive and sexual health, tells Bustle. “No one wants to hurt their partner’s feelings, which is why it can feel safer to just agree when they ask, ‘Does this feel good?’ However, the result of this small lie is that you’re less likely to get what you actually need in bed and that’s a recipe for frustration and resentment.”

Having a conversation or even showing your partner what you like may feel uncomfortable at first if you’re not used to it. However, it gets easier with time and, “they no longer have to be a mind reader!" Sedgwick says.

One of the most damaging "lies" we hold back is actually how we feel in a situation, Jocelyn and Aaron Freeman, authors and hosts of relationship podcast, New Power Couples tells Bustle. “Far too many people withhold their feelings and that chips away at our true connection,” the Freemans say. “While it might not feel like a blatant ‘lie' when we withhold how we feel when our partner says something hurtful, we are diminishing our connection.”

The most damaging small lies come from how our hearts feel, the Freemans explain. If you can be authentic in the moment about how you truly feel, the less likely you are to make an "environment for bigger lies in your relationship."

"It’s better for all committed couples, whether married or not, to decide that there are no ‘small lies,’” Joan Fradella, FL Supreme Court Certified Family Mediator at Divorce thru Mediation, Inc. tells Bustle. “Any dishonesty can cause damage. It's not that everyone should walk on eggshells in relationships. But being honest with each other is the best way to find out whether a relationship is worth working on.”

Honesty is still, and will probably always be, the best policy.