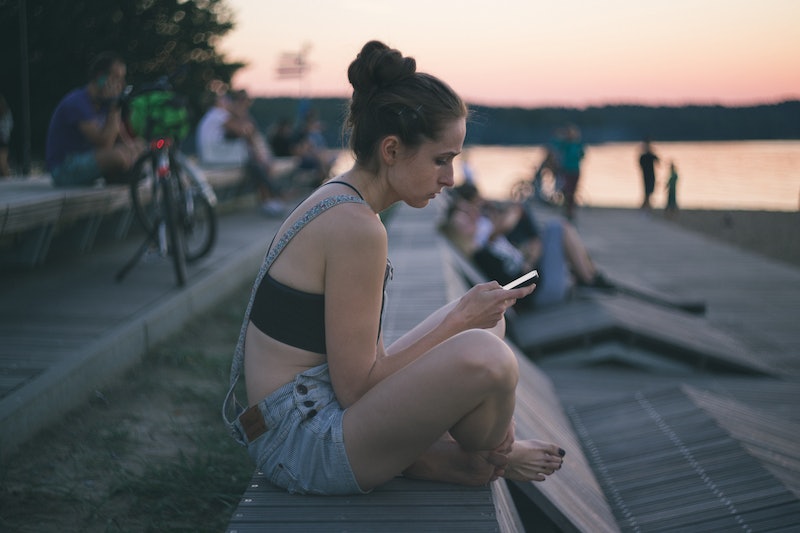 A few months after breaking up with my abusive ex, he tried to get back in touch with me by asking my friend for my phone number. My friend immediately asked me about it and I told her that I didn't want him to be able to contact me. He proceeded to tell everything he wanted to tell me to my friend who then took a screenshot of the entire conversation and sent it to me. I read the messages, but I refused to respond. My ex was manipulative throughout our relationship, so I knew I would never be in a position where I should talk to my ex again.

While I should never talk to my ex due to his abusive habits in our relationship, there are also plenty of other times where you should never talk to your past partner. "If you find that talking to your ex leaves you feeling conflicted, anxious and depressed after you’ve parted, it’s because you shouldn’t be talking to your ex," April Masini, New York based relationship expert and author, tells Bustle. Moving on without someone can be hard, but not all exes are created equal. So here are all the times you should never speak to your ex.

1. They're In A Serious Relationship

If your ex is in a serious relationship with someone else, you should give them space to move on. You don't want to be that ex that keeps lingering around because it not only hurts your old partner, but it hurts you as well. By backing off, "you're creating a genuine single life without your ex for yourself and that's always the best way for you to move on," Masini says.

2. Your Current Relationship Is Rocky

If you and your current partner are facing conflicts in the relationship, you absolutely shouldn't be talking to your ex. "Be in the fight," Masini says. "Don’t use your ex as a crutch to keep you from exploring deeper layers of the relationship you’re in — even when it’s difficult."

Not only could talking to an ex hurt your current partner's feelings and cause more issues in your relationship, but you're also denying your relationship of growth opportunities. When you and your partner face your difficulties head-on, you end up getting to know yourselves better and can actually strengthen your relationship.

3. You Aren't Comfortable With Being Alone

If the reason you want to talk to your ex is because you don't like being single, you should not talk to them. "Talking to your ex is just putting off and prolonging your ability to find someone else," Masini says. "You can't be truly single unless you're truly single." Take this time to reflect on why being single upsets you and also try to focus on all the great opportunities that being alone can provide. But if you're using your ex to feel less lonely, you're actually just denying yourself the chance of moving on and even meeting someone new.

4. You Feel A Decline In Your Mental Health When They're Around

If you feel worn out every time you talk to your ex, it's because you shouldn't be talking to them. "Anyone who leaves you feeling worse and not better is letting you know with these residual feelings that you shouldn’t be talking to them," Masini says. Your mental health is more important than anything you think you need to discuss with your old partner. Take care of yourself and cut off the communication.

5. There Are Unrequited Feelings

If one of you wants to get back together and the other one doesn't, then break off communication. "If there's actually hope for a reconciliation, that's one thing," Jill Whitney, a licensed marriage and family therapist tells Bustle. "But if one of you is really done, then continuing to talk about the relationship is a waste of time and emotional energy." You both deserve to move on, and you can't do that if one of you is still pining for the other.

6. You Have A Busy Schedule

Sometimes it's simply just not a good time to talk. "Don't talk while either of you are at work or it's close to bedtime," Whitney says. "There's nothing you need to say to each other at this point that can't wait until a convenient time."

If you and your old partner do have things to discuss, set aside a time that's acceptable for both of you. There's no reason to stress yourselves out to have a conversation when it can almost always wait until you're both in the right mindset.

If your ex has already cleared all of their clothes out of your drawers and you have that book you leant to them back, there's probably no reason left to talk to them. "If one of you needs to get stuff out of the apartment or you haven't finished sorting out how to divide joint property, that requires some conversation," Whitney says. But if you've already physically gone your separate ways, it's probably time to stop talking.

8. You Want To Resolve Old Issues

If all of your conversations are to discuss what went wrong in your relationship, you shouldn't be talking to each other. "Ex-couples often have trouble letting go of their conflicts," Whitney says. "If you couldn't agree on this while you were together, it's even less likely that you'll see things the same way once you've split up."

If the problem couldn't be resolved when you were together, there's no point in wasting your energy trying to solve it after you've broken up. Accept what happened for what it was and try to move on from it.

Just like with my own ex, if your ex has been manipulative or violent in the past, there's absolutely no reason to speak to them. "Abusers and manipulators tend to be great at sucking people back in," Whitney says. "It probably took you a lot of effort to get out of there. Stay strong." These types of past partners don't deserve your time or energy, so avoid conversations with them at all times.

If you feel like you aren't getting anything out of speaking to your ex, then do yourself a favor and just don't. There's no reason to keep old flames around if they are just keeping you from growing and moving on. It's OK to not want to talk to a past partner, even if you ended amicably, and it'll actually benefit you both in the long run to cut off communication.