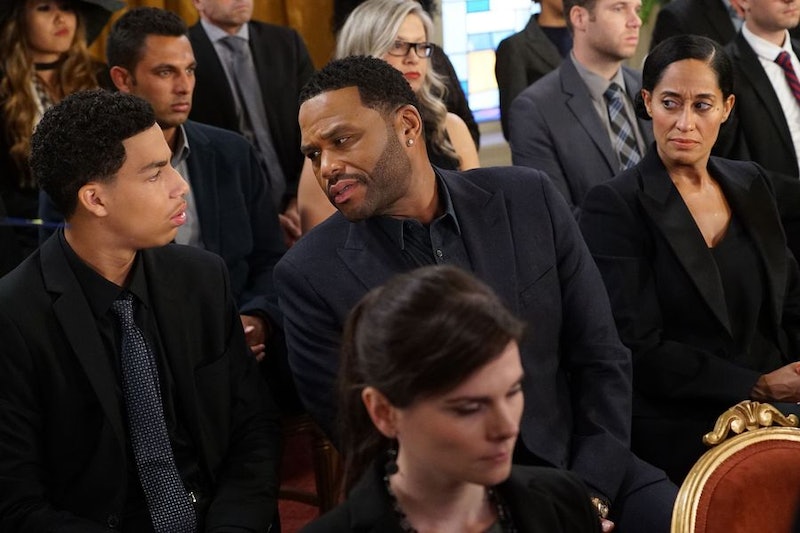 Dre is always hard on Junior during black-ish, and there's rarely a time when the nerdy younger Johnson gets one over on his dad, so when Junior manages to score an embarrassing dunk on his dad, he relishes in his victory in such a showboating fashion that Dre vows to get revenge on his son — and he does so by making Charlie pretend to be a ghost. This black-ish Halloween special is all about pranks, and it's a somewhat mean-spirited story, which kind of works because not only is the relationship between Dre and Junior kind of mean, so is Mischief Night. For those who aren't aware of the "Mischief Night" tradition, it's the night before Halloween, when local kids play pranks like throwing eggs or toilet paper around the neighborhood In short, it's the worst thing ever.

But with a black-ish twist, Ruby hears the idea for a neighborhood Mischief Night and decides that it sounds a lot more like the Purge, a night in which all pranks are legal (though, as she finds, not covered by auto insurance) and everyone should be encouraged to let their inner demons come out. For example, Ruby gets revenge on a neighbor's mailbox after trying to grab her hair, and Bow goes HAM on some teens after they ruin her cashmere sweater with paintballs. Ultimately, the Purge may leave carnage behind, but Ruby was right: everyone in town is feeling a little more cheerful and settled in time for Halloween after exorcising their demons the night before.

However, Dre's plan is a little less successful. In order to get his revenge, Dre stages a fake funeral for Charlie, blaming an allergic reaction to nuts that Junior gifted to his dad at work. Dre then has Charlie, who should probably be looking after his poor, neglected son instead, pretend to be a ghost in order to spook Junior, embarrassing him the way Dre was embarrassed.

With an assist from his mom and older sister, Junior manages to realize the plan and, once again, through complicated means, trick his dad and emerge the ultimate Halloween prank war champion. But in the end, the dad and son duo are brought closer by their shared love of pranking one another and the rest of the fam, and there's even a few little nods to the show's first-ever Halloween episode, which was also about prank wars being a way that Dre shows his love for his kids. It may involve misusing hospital resources and leaving poor Eustace at soccer practice until all hours of the night, but it makes for a spooky and funny Halloween episode for black-ish Season 3.