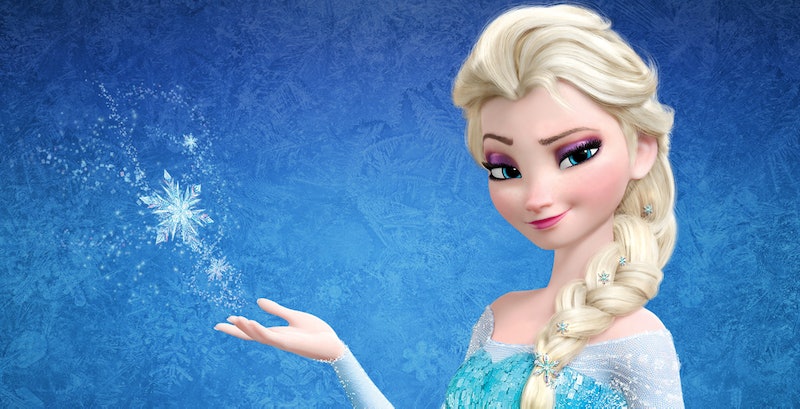 By now most of us have in some way encountered the Pixar theory. The Pixar theory basically boils down to all the Pixar films existing within the same universe (a concept which has been confirmed by Pixar itself), and it makes the blog rounds every once in a while when someone notices another connection. Now this theory's extended to Disney, a fitting expansion considering that Disney owns Pixar. So how does this new theory apply to Disney's current megahit, Frozen ?

It's already public knowledge (to those who stalk Disney Easter eggs and/or have a lot of Buzzfeed on their Facebook dashes) that Disney planted a small cameo by Tangled's Rapunzel and Eugene/Flynn: They were seen wandering past Anna as the gates open in her song "For the First Time In Forever."

The newest theory expands on that, taking it all back to — rather maudlinly — the death of Elsa and Anna's parents in Frozen. Remember when they go away in the beginning of the film, leaving Anna and Elsa to "go to [their] cousin's wedding"? And remember how they die in a shipwreck sometime during their journey, leaving Anna and Elsa to fend for themselves and come to terms with their identities on their own?

Yeah, it was a real bummer. According to this theory, though, the worlds of Tangled and Little Mermaid might be tangentially involved.

As you can see, the theory is this: Elsa and Anna's parents went off to attend the adorable wedding of Rapunzel and Eugene (which it's a bummer they didn't invite their kids to, but, y'know, scary ice god powers and all). On the way there or the way back they got caught in a hell of a storm and, well, died. Some time later Ariel gazed at their watery grave and used it as a projection for her own fantasies of humanhood.

All in all, it's one of the more maudlin Disney theories I've ever heard.

The film who's timeline this would have the most impact on would, I think, be The Little Mermaid. Tangled and, of course, Frozen are both relatively recent, so it makes sense that Elsa and Anna would be teenagers when their parents went off to the wedding of that film's main love interests, and that Eugene and Rapunzel would still be young when they in turn came to visit for Elsa's coronation.

But The Little Mermaid was released (holy shit) 24 years ago, which begs the question: How does time work in the Disneyverse they've set up? There's obviously The Princess and the Frog, Pocahontas, and Mulan, which all take place in distinct historical eras and real-life locations. So how do things fly for ones like The Little Mermaid?

Actually, now that I think of it, the costuming in both films seems to reflect similar eras:

As always, it's extremely within the realm of possibility that this is all over-eager fan speculation. But it's certainly got its intriguing possibilities.

I'm also really gonna need Disney to map out the locations of all these kingdoms for me sooner or later. (Update: