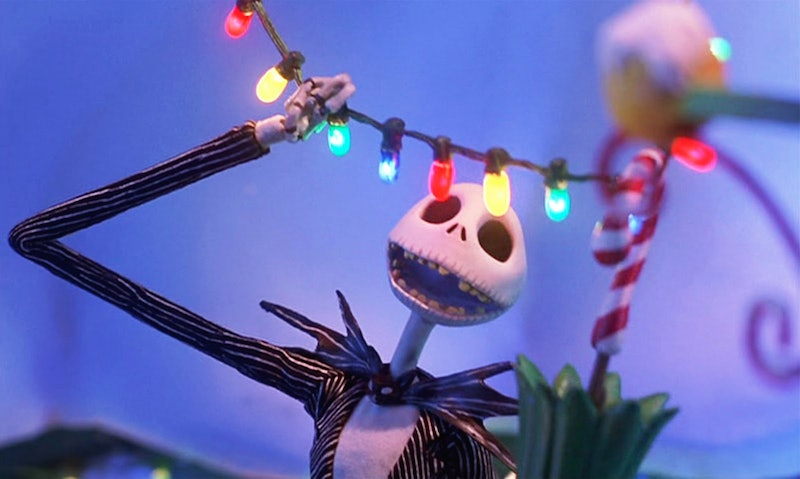 I love Halloween and sitting down with a big bucket of candy to watch Halloween movies. The thing is, I'm not super into horror (total chicken), but I do love some classic Halloween comedies or "kids movies," like The Addams Family, Hocus Pocus, or, my most favorite of all, The Nightmare Before Christmas. I know that there are many people out there who consider Nightmare a dual Halloween and Christmas movie and watch it on both holidays. But I firmly fall in the category of people who only watch The Nightmare Before Christmas on Halloween, because I consider it much more of a Halloween movie than a Christmas one.

The Nightmare Before Christmas is not only my choice Halloween film, but it's one of my most favorite films of all time. Between the stunning stop-motion animation, Danny Elfman's perfectly singable songs, and the movie's cast of bizarre characters, Nightmare has everything that other Disney classics have, with the added bonus of its total embrace of weirdness, kookiness, and darkness. Which is why I've always thought it jives way more with the deadly ambiance of Halloween, rather than the feel-good warmth of Christmas.

For starters, the movie's plot is totally focused on the story arcs of characters who live in Halloween Town, people who have lived Halloween and all that the holiday symbolizes for their entire lives. They're witches, ghouls, goblins, and werewolves, to name a few. And while the story does see Jack Skellington head to Christmas Town, where he meets a few of Santa's elves and the big red guy himself, the emotional heft of the movie lies with Jack and the rest of the Halloween Town characters. They go through a cycle of self-doubt, hopefulness, and realization that you don't see of the few characters of Christmas Town.

When Jack Skellington, the Pumpkin King of Halloween, finds himself in a bit of a midlife crisis, tired of the same old thing, it's totally reasonable for him to want to try something new. And wandering through that forest of cool holiday doors, who wouldn't choose to go through the bright and shiny Christmas tree-shaped one? But Jack's mission to celebrate Christmas that year suffers from a bit of noble ill-intentions. How can a group of monsters who love all things dark, scary, deadly, and frightening make a holiday about light, warmth, family, and joy work? The truth is they can't, and yet the lesson isn't that you shouldn't try anything new, but that you should embrace your own talents and traits, no matter how different they might seem from the mainstream.

The major conflict of the movie comes because the people of Halloween Town don't understand Christmas and try to impose the dark, creepy things that they enjoy onto the cheery, bright holiday. We know it's going to be a disaster, that the kids expecting toys under the tree are going to freak out over the severed heads they receive instead, but Jack and the wolf man and the gang of witches don't know that — they have to learn it. The emotional journey is centered on how Jack and the characters of Halloween town react to Christmas, try to make it theirs, and then realize that it's not for them.

But the rough lesson helps Jack realize that Halloween is his destiny. Nightmare's message is that no matter how creepy or weird you are, or if darkness makes you happy, or if you prefer something a little ghoulish and scary over cheerfulness and sweetness, you're awesome. Embrace the severed heads, the magic spells, and the allusions to death and decay. Nightmare's themes don't revolve around the same things that most Christmas movies do. It's not about appreciating your family, finding joy, or bringing light into a dark time of year. It's more about how, at the change of seasons, the world is turning dark, so let's embrace it. We're freaking weird, and we love it.

So that's why I've always thought of The Nightmare Before Christmas as more of a Halloween movie than a Christmas one. Its mood, themes, and lessons all seem to mesh with the scary October holiday, and besides, watching the film's intense focus on Halloween at Christmas feels like moving backwards in time. Plus, the film's own director put and end to the debate last year. At Colorado’s Telluride Horror Show, Entertainment Weekly reports, a little girl asked Henry Selick, "Is this a Christmas movie or a Halloween movie?" Selick replied, definitively, "It’s a Halloween movie." So there you have it. And while some folks who watch Nightmare on Halloween will still cue up their DVD's once again come Christmastime, I'll be giving it a watch once this month, and then not again for another 365 days. Because I just can't wait until next Halloween.