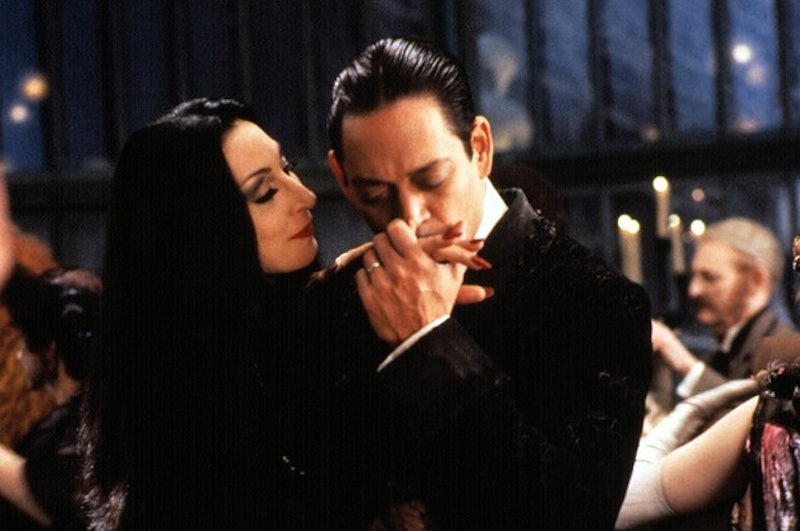 The Addams Family first appeared as a comic strip in The New Yorker before being adapted into a campy television series in 1964. The Gomez and Morticia of the TV show had an incredibly intense air of romance about them. It was, and still is, surprising to see an on-air couple — one with two children, no less — pine for one another, grasp at each other, and long for each other after years of marriage. And while the 1960s series couldn't go very far into anything scandalous in terms of romance, having to keep a toned-down, family friendly vibe, the 1990s film series could take things a bit further. As part of their intense romance, the Gomez and Morticia of 1991's The Addams Family and 1993's Addams Family Values have a bit of added kink and playful sexuality which suggests a healthy BDSM relationship.

Later, Gomez and Morticia's experience with kink even helps them in the movie's conflict. When Tully and Fester's fake mother Abigail takes over the Addams mansion, Tully straps Morticia to a stretching rack to torture information out of her. But his plan gloriously backfires. In a fulfillment of the "too kinky to torture" trope, Morticia actually enjoys being stretched, and jokingly says to Tully, "You've done this before!" When Gomez arrives to rescue her, he isn't enraged that his wife has been strapped to a torture device, but rather turned on at her very appearance. And unlike in the television show, where many times Morticia is seen rejecting Gomez's wild dog advances, it's clear here that she's enjoying it all just as much as he is. She may still have to delay gratification, but it's with a wink of seduction, rather than a sigh of frustration.