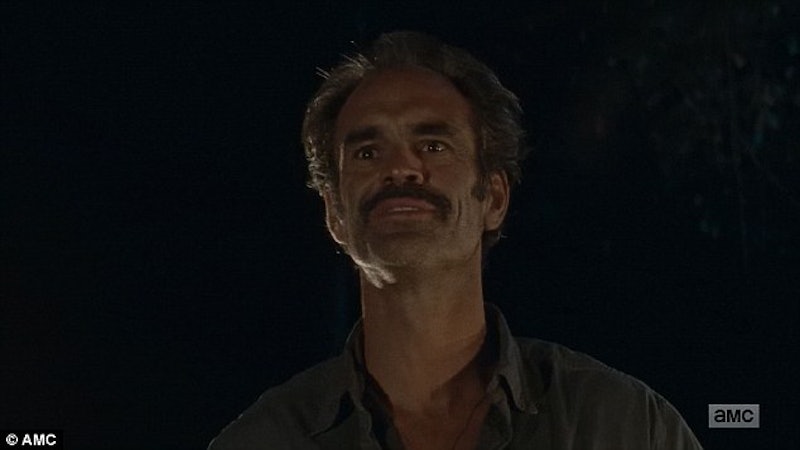 It's been a week since the most brutal episode ever, so fans have had some time to process major deaths in The Walking Dead Season 7 premiere. Now we can start to look more closely at other parts of the episode and new characters, such as Negan's “right-hand man,” Simon. Played on the AMC Series by Steven Ogg, Simon isn't a character in the comic books that the Walking Dead is based on, which means we have no idea what's in store for him and can't turn to the source material for hints. None of the Saviors in the comics seem to have much in common with Simon,so he's similar to Daryl in that sense. He gets to remain mysterious and anything he does will surprise viewers.

We first met Simon at the very end of Season 6, when Rick’s group attempted to get to Hilltop Colony and their way was blocked by Saviors in every direction. At one point, Simon and a group of the Saviors set up a road block to try and take the group's supplies. That introduction already suggested that Simon will do some of Negan’s dirty work, and the season premiere confirmed as much when Negan formally introduced Simon. For the most part, the "right-hand man" stayed silent, except when he gave Negan a pen and informed him of Rick’s hatchet. While I may not be looking forward to getting to know Negan's sidekick, you should know more about the actor who plays him. Here's where else you might have seen Ogg.

That’s right, Ogg landed roles on two of the most popular shows on TV right now. Now, if he earned a spot on Game of Thrones, he would hit the trifecta. He’s a minor character on Westworld, playing one of the many host villains, Rebus. In the third episode, Dolores came home to find her parents dead and there was a guy trying to find milk, who then dragged her into the barn. After Dolores imagines that the man is someone else, she shoots him. That attacker would be Ogg's Rebus.

As popular as Westworld is, Ogg is probably best known for his role in the popular video game Grand Theft Auto V. He’s the voice and motion capture artist for Trevor Phillips, one of the game's main lead characters.

If you thought Ogg's Westworld character was creepy, he literally played "creepy locksmith" on an episode of Broad City.

He also stars in a digital series on go90.com about a U.S. Black Ops team. He plays James Braddock in this miniseries, which is actually based on the Battlefield video game, and you can watch it for free online.

Ogg appeared in one episode of Better Call Saul Season 1 as Sobchak, a criminal who makes the poor decision of going up against Mike Ehrmantraut.

Just watch the commercial above and enjoy.

Depending on how this conflict with Rick's group goes, Simon might not be on The Walking Dead for very long, but I wouldn't worry about Ogg — he has plenty of great roles to keep him busy.