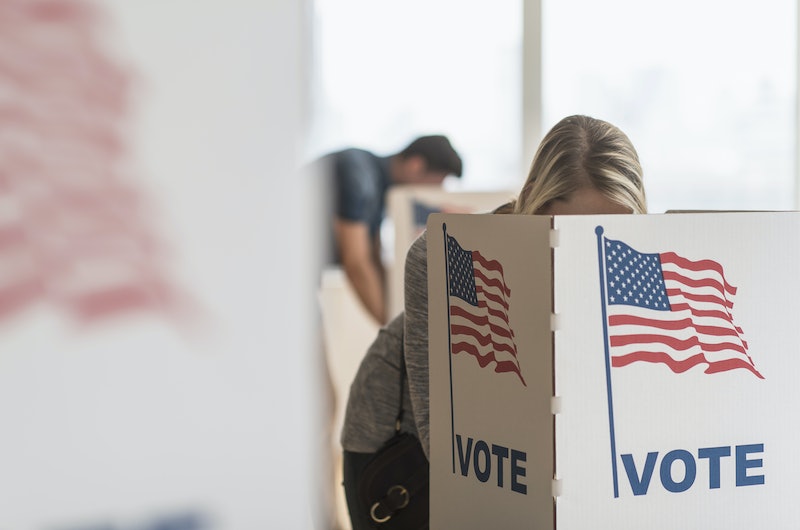 In the cacophony of this election season — a year in which speculation about Clinton's emails and headlines about Trump's alleged mistreatment of women have dominated the news cycle — it's easy to forget all about the actual mechanics behind the election, like the role of the Electoral College in determining our next president. But understanding how our president is actually elected is important — especially because this could be an election where the Electoral College makes some headlines of its own.

The Electoral College goes all the way back to the founding fathers. When they were writing the U.S. Constitution in 1787, they struggled to come up wtih an electoral process. Some of the fathers wanted to do a straight popular vote, but others wanted Congress to select the president without input from the general public.

Some of the fathers also didn't trust that the general public had the necessary knowledge to pick the best possible candidate. William C. Kimberling, Deputy Director of the National Clearinghouse on Election Administration, writes, "Direct election was rejected not because the Framers of the Constitution doubted public intelligence but rather because they feared that without sufficient information about candidates from outside their State, people would naturally vote for a 'favorite son' from their own State or region." It was very hard to travel, or even get information passed, through the colonies, so the founders worried that people would have a hard time getting reliable information about the candidates. They thought that people might just end up voting for the most familiar name from their district, which could result in a majorly split election with no clear winner. They also worried that large states would end up deciding the entire election, and that the votes of small states wouldn't matter.

Additionally, as Marc Schulman wrote for History Central, "They feared a tyrant could manipulate public opinion and come to power." (This idea may sound eerily familiar to you, given many of the things said during this election cycle.)

Their answer was to devise the Electoral College, during a committee working to revise the Virginia Plan, wherein Congress would elect the president. The committee worked from this plan to develop the Electoral College. The College would consist of men (at that point, only white men) who had the knowledge to make an educated decision about who the president should be. Each state would get a certain number of electors based on its population. It was considered a compromise between the popular vote and giving Congress the responsibility of picking the president, as well as a way to keep true to the fathers dreams of a democratic state. In the words of Alexander Hamilton,

A small number of persons, selected by their fellow-citizens from the general mass, will be most likely to possess the information and discernment requisite to such complicated investigations.

However, the most familiar aspect of the Electoral College that we talk about today — the "winner-take-all" system — didn't enter the picture until 1824. In the early years of the Electoral College, states could choose how they divided up their electors and went through several different systems. Technically, states actually still have the right to choose how they allocate their electors (Nebraska and Maine split them depending on how many votes the candidates get), but 1824 is when most states shifted to the "winner-take-all" system.

Why? Since state leaders had the option to choose how they allocated their electors, they decided this was the most effective way to ensure that their preferred candidate was the one who ended up holding office. Once some states decided to go this route, others quickly followed in an effort to show party loyalty.

Some of the common modern distrust of the Electoral College stems from the idea that technically, an elector could go rogue and not cast their ballot for the candidate that the general public in their state voted for. In the early days of the Electoral College, electors were able to cast their ballot however they chose — but today electors are, in some states, legally bound to vote for the candidate who wins the popular vote. Even in states where it's technically legal for an elector to cast their ballot agains the popular vote, it's very rare — since 1824, there have only been 157 cases of a "faithless elector," and 71 of those votes were from a 1872 incident where the Democratic candidate Horace Greeley died between the November election and the casting of the electoral votes.

Despite the strong reasoning behind the history of the Electoral College, it's still one of the most hotly debated institutions of the American democracy. More constitutional amendments have been proposed to alter or eradicate it than on any other topic — over 700. On Tuesday night, we'll have to watch closely to see if the results of the election seem heavily weighted by the existence of the Electoral College and the "winner-take-all" system. Who knows — maybe this will be the year when faithless electors take a stand.