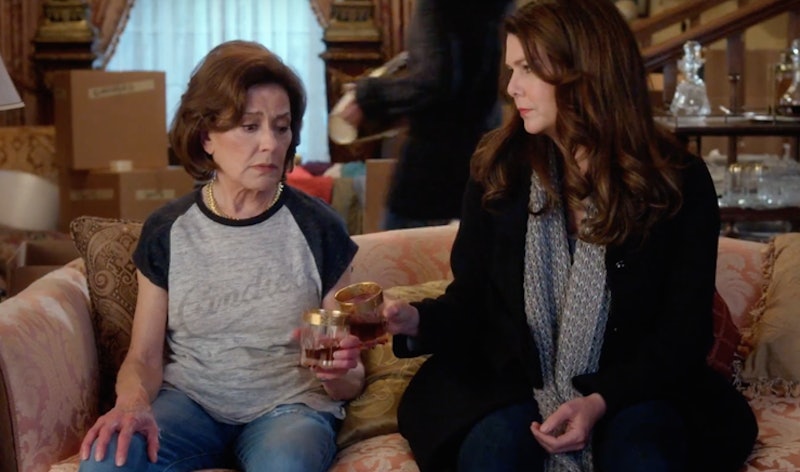 If you have just stopped sobbing over the full-sized Richard Gilmore portrait featured in the Gilmore Girls: A Year in the Life trailer, then you might want to go check your tissue supply because I have even more sad news. At the Entertainment Weekly Pop Fest, series creator Amy Sherman-Palladino revealed the Gilmore house will look a little different this time around. During the rebuilding process, the size of Emily and Richard's home grew, and it turned out to be an unexpected tribute to the late Edward Herrmann.

Because of the show's limited WB budget, when the house was built in Season 1 the set was small, especially compared to Herrmann's six foot five frame. Sherman-Palladino explained the Gilmore house was like a dollhouse for Herrmann who always loomed large. Now the house finally matches the man, but Herrmann's passing means he will never get to stand in the expanded Gilmore manse.

It is fitting in the saddest possible way that the house is now so much larger, given that it is also emptier without Herrmann's Richard in it. The emptiness will serve as a visual reminder of everything Emily, Lorelai, and Rory lost when Richard left their lives. See, I told you you would need those tissues.

"It was finally big enough for Ed, and he wasn't there," Sherman-Palladino told EW. "Ed looms large. He loomed large in life, and he looms large over these episodes."

Sherman-Palladino and Netflix brought six new clips along with them to the Pop Fest, and one of them highlighted Emily's perspective on life post-Richard in a funny, heartbreaking way. The scene finds Emily confronting Luke about whether or not he has a will so he won't leave Lorelai left to deal with all of his unfinished business. The scene is just one more reminder, along with the new portrait and larger house, of how the Gilmores' world has been upended by the loss of their patriarch.

The heartbreak of Herrmann's passing is all too real for the cast and the fans, but it is fitting that so much of Richard's spirit will be featured in the four new episodes. The actor never got the chance to reprise the role of Richard, but his character will still touch Lorelai, Rory, and Emily's stories as they move forward without him. Knowing the house will be a little bigger and whole lot emptier is a tangible reminder of just how irreplaceable Richard Gilmore and Herrmann are in the Gilmore Girls world.

More like this
'Gilmore Girls’ Lauren Graham Just Revived Our Hopes For A New Reunion
By El Hunt
The Kenan & Kel Reunion On SNL Took A Dramatic Turn, Thanks To Keke Palmer
By Brad Witter
These 'Criminal Minds' Throwback Photos Show The Cast’s 17-Year Evolution
By Grace Wehniainen
The First Trailer For 'That '90s Show' Includes So Many Nods To The Original Series
By Jack Irvin, Alyssa Lapid and Grace Wehniainen
Get Even More From Bustle — Sign Up For The Newsletter