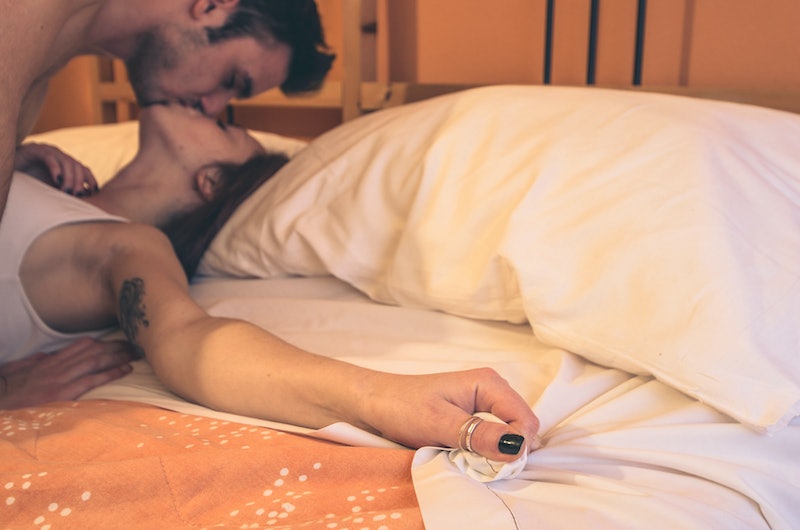 You've probably heard about "the orgasm gap" — the difference between men’s and women’s frequency of orgasm in heterosexual relationships. While some say the orgasm gap is closing among Millennials, others have found that this inequality in the bedroom it's (unfortunately) still alive and well with the young crowd. The Vagina Dispatches, a new video series from The Guardian, explores the orgasm gap in their latest episode. They speak to a psychologist, a sex educator, and a pelvic floor therapist and real women about their orgasm experiences. And it gets right to the heart of what a lot of women feel about sex and orgasms.

"I guess we weren’t surprised to hear from so many women about finding it difficult to orgasm — the statistics suggested that there would be a lot of them out there! But the messages have still sort of taken us aback," the hosts of the series, Guardian US's data editor Mona Chalabi and senior video producer Mae Ryan, tells Bustle "A lot of people have told us they related to the personal experiences we shared in the episode about the things that have made it difficult for us to orgasm. And many of those commenters/emailers/DMers have shared some really personal stories of their own which is really moving because it’s putting us in such a position of trust. It’s encouraging to feel like we weren’t just oversharing —that the process of us opening up on screen was really valuable to some viewers. Especially because treatments still feel like they’re not as available or as sophisticated as they should be — so for lots of people with vaginas, just knowing that there are other people out there going through a similar experience is reassuring."

One of the most interesting parts was a researcher from UCLA explaining how her work studying orgasms was shut down. It just shows how there's a taboo around discussing orgasms, but also an apathy toward female sexual satisfaction. "It’s remained taboo partly because a lot of people just dismiss it as being unimportant," Chalabi and Ryan tell Bustle. "You come, you don’t come — it’s no big deal. But that’s rooted in some really sexist notions about women not being sexual beings."

As the video finds, there are physical and emotional sides to an orgasm for a lot of women and some people are naturally more orgasmic than others. But either way, it's something we should be talking about. Studies have shown that Millennials are more concerned with their partner's orgasm than previous generations, but the gap still exists and women are still uncomfortable expressing their sexuality and needs. I definitely recommend checking out the whole video— and their others— to see what Mona and Mae are about.

Here are my favorite moments, because your vagina is definitely a sunflower:

One In Four Orgasm From Penetration

Part of the problem? A lot of women need far more than penetration to orgasm. In fact, only one in four women actually orgasm from penetration, shown by these amazingly diverse labia.

For Some Women, It's All About The Bulbs

Why do some women orgasm from penetration and some don't? Well, it's all about the bulbs. The internal part of the clitoris includes these bulbs of tissue that get erect, much like penis. Because they're near the vaginal opening, some women get a lot of pleasure and can achieve orgasm from penetration. Most, however, need some attention paid to the actual clitoris, and that's fine too.

One of the things I love about the videos is how frank and open the hosts are. Mona explained she hadn't orgasmed before last year which, as Mae points out, would have been cause for an international panic button and some sort of humanitarian intervention had she been a man.

They speak to a number of interesting women and experts to get to the root of women and orgasms. My favorite, this woman who says to pretend "your vagina is sunflower in the springtime."

The bottom line is if you have trouble orgasming and want to work on it, you can — and you should feel totally entitled to do that. Whether it's working with a partner or on your own, there are plenty of different ways to explore.