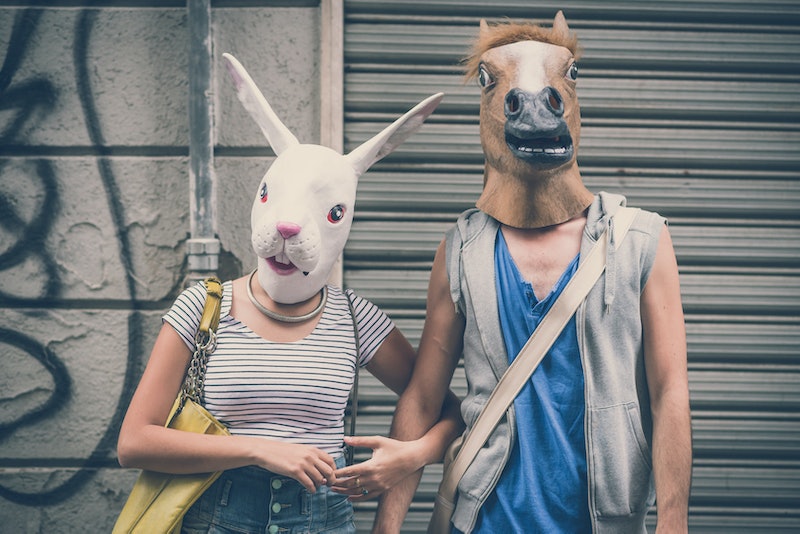 With online dating, it can sometimes feel like you’re just another face in an endless sea of photos. But how do you stand out on dating apps? Even getting a match isn’t a guarantee anymore. Dating app turned relationship app Hinge recently rebuilt their app, changing from their standard dating profiles to "stories," which feature photos, basic information, and answers to six out of Hinge's 67 profile questions, such as "What are you reading?", "I'd donate a kidney for", "Worst roommate story", and "Best Halloween costume." Instead of swiping left or right on people, members can comment or like part of a potential match's story. The idea is that engaging with a photo or someone's question to a question will encourage better conversations than the generic "hey, how's it going?".

One way to start a convo with someone you see on Hinge? By sharing your #Halloweekend costume on your story. Updating your profile by answering this question (and maybe even uploading a photo of it too) will give others something to ask about. But not all costumes are created equal, of course. Below are the top 10 Halloween costumes that generated the most conversations on Hinge this year, from Jake from State Farm to Mugatu.

Despite controversy over his his questionable Reddit habits, apparently Ken Bone was still a super popular costume. Don't be surprised if someone starts up a conversation to ask you what you were thinking, though.

Just over a year ago, Martha Stewart sold her empire Martha Stewart Living Omnimedia. Despite being a household name, author, cook, entrepreneur, and TV personality, some still think of her as the lifestyle and crafts icon who went to jail.

Jake from State Farm is another commercial personality that has surpassed TV and become a strange Millennial culture icon. Like Flo from Progressive ads, Jake was a surprisingly popular choice this Halloween.

Harambe, a gorilla at the Cincinnati Zoo was shot earlier this year creating waves of outrage on social media and inspired many memes.

You're killing me, smalls. Dressing up as every boy's first crush is sure to increase your messages.

A truly punny-yet-witty costume like a Freudian Slip will make anyone smile to themselves.

A classic movie role, Mugatu will surely make people want to ask your about your costume. If you used a real puppy, I'm sure you'll start even more conversations.

Not super PC, but apparently people like to talk about puns and Kim Jong Il.

Throwback to playing this in your friend's basement in elementary school. But hey, there's nothing like a healthy dose of nostalgia to get the conversation flowing.

And the final most-conversed about costume on dating apps is none other than Ron Burgundy in his burgundy.

Update your profile with your latest costume, and see for yourself how people respond. Happy dating.