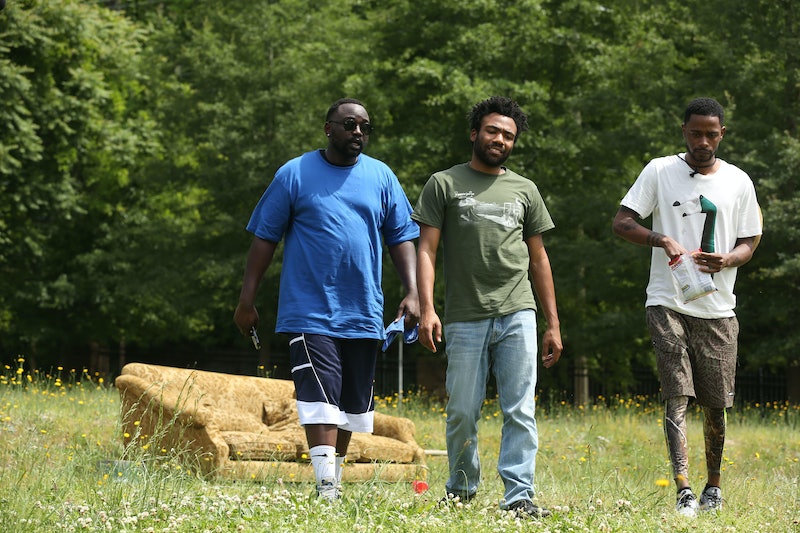 After years of development, FX's Atlanta quietly delivered a nearly flawless debut season. Unfortunately, that season is already coming to an end on Tuesday, Nov. 1, and though the premiere of Atlanta Season 2 may not take years again, there is probably still a long wait ahead. FX renewed the show in late September after just a few episodes had aired, alongside fellow freshman series Better Things, and both were lavishly praised by FX programming heads Nick Grad and Eric Schrier in the announcement. "It’s really gratifying to launch two new comedies that have received overwhelming critical acclaim right out of the gate and that are emblematic of FX’s award-winning brand," they said, as reported by Deadline.

The announcement came with the good news that Atlanta Season 2 will again contain 10 episodes, but there was no word of when it would premiere. It's very likely that the show will return around Fall 2017, since seasons of FX series tend to air about a year apart. However, given the news that creator and star Donald Glover will play young Lando Calrissian in the Star Wars Han Solo prequel, there could potentially be a bit of a delay on Atlanta Season 2. Unfortunately, Glover doesn't use social media and tends to stay out of the spotlight in general (the report that he and his girlfriend have a child came as a total surprise a few weeks ago), so he hasn't given any updates about when to expect more Atlanta either.

Hopefully, we'll be able to revisit Earn, Paper Boi, Darius, and Van by next September. But since that is still far away, here are some other series you should check out while you wait for Atlanta Season 2.

This HBO series is like the mirror image to Atlanta. It's set on the opposite coast, the two central friends are women instead of men, and those women have more confidence in their careers than their ability to date. It also happens to be just as great as Atlanta.

Though it centers on a family reckoning with their newfound possession of a farm, the OWN series is more about southern black social dynamics and this particular family's history. Great filmmaking and a love for its setting also give the show some major similarities to Atlanta.

Another show deeply embedded in the American south, the HBO comedy features Atlanta's Bryan Tyree Henry in a role not much like Paper Boi, so you can see what else he can do. You should also watch it for Kimberly Herbert Gregory's incredibly confident and assured comedic performance as his character's ex-wife.

This fellow FX series features a trio of characters that spoof Odd Future and can feel like Earn, Paper Boi, and Darius through a funhouse mirror. And while it seems a little strange to recommend a show with so many white lead characters to fans of one of the very few TV series with a predominantly black cast, You're the Worst acknowledges and seems to revel in its characters' privilege in a way that's comparable to Atlanta's portrayal of white characters.

Earn is trying to make it in the music industry, so he'd do well to watch this show, which has so much practical, useable advice on how to become successful. OK, it's not realistic or informative not at all, but Empire is essential viewing for anyone who loves music anyway.

Atlanta and Better Things were renewed together, so why not catch up on both? Better Things, a loosely autobiographical show from single mom and TV star Pamela Adlon, feels a lot like the best episodes of Louie — which makes sense, because she used to work both in front and behind the camera on that series.

These series should hold you over until Glover and co. brings viewers more Atlanta, which, hopefully, is just under a year away.

More like this
A New 'And Just Like That' Table Read Pic Confirms A Key Character's Return
By Jack Irvin and Grace Wehniainen
This 'Gossip Girl' Wardrobe Error Has Gone Viral On TikTok
By Alyssa Lapid
'The Last Of Us' Has Officially Been Renewed For Season 2
By Darshita Goyal
Here’s Everything Coming To & Leaving Netflix In February
By Jake Viswanath
Get Even More From Bustle — Sign Up For The Newsletter
From hair trends to relationship advice, our daily newsletter has everything you need to sound like a person who’s on TikTok, even if you aren’t.