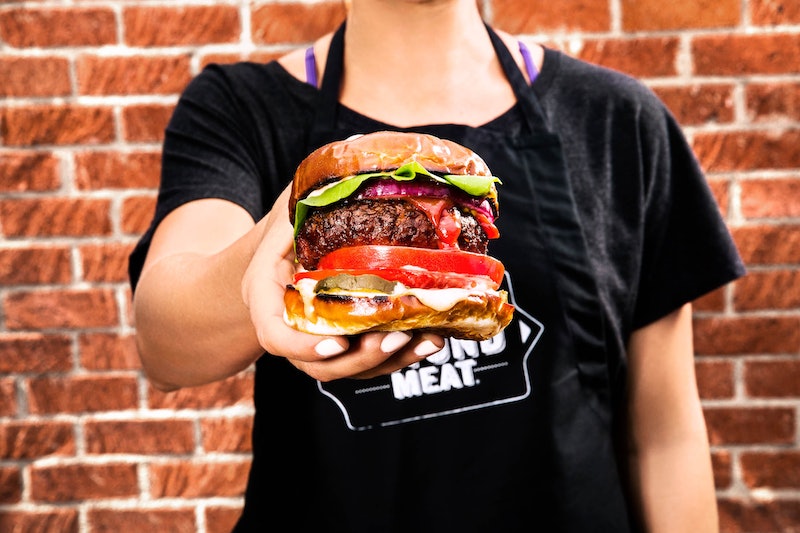 I used to enjoy a good burger — and so long as it was well-done, had all the dressings, and was designed to make me forget that I was eating animal flesh, I thought they were delicious. But when I finally stopped eating meat nearly two years ago, my appetite for it disappeared. My associations had changed after watching footage of how meat is made, and it was no longer appetizing for me.

That is not the case for my dear friend Yulia. She went vegetarian about six months ago, but has not watched the slaughterhouse footage, and is Ukrainian, so meat has always been a huge part of her diet. The thing she found herself missing most? Burgers. Even harder for Yulia, her partner Dima — a diehard meat-eater — refuses to eat any of her vegetarian or vegan cooking, because he is convinced it tastes weird and that you can't get ample nutrition without meat. (Sadly, the reverse is true; a meat-filled diet is actually far less healthy.)

So when I was invited to the Beyond Burger launch party and tasted the much-hyped burger, now being sold in select Whole Foods with the goal of being nationwide at Whole Foods by the end of the year, I was hopeful this would be the product to convince Dima that alternative meat could actually be just as delicious. I wasn't disappointed.

The Beyond Burger isn't like other veggie burgers. Made in a lab and constantly updated, it is eerily similar in texture, appearance, and taste to an actual beef patty — so much so that when I first tasted it without the dressings and a bun, I felt more than a little creeped out. This was just like eating meat, and the experience was a little too close for comfort. How did they do it? The "meat" even looked pink in the middle, the texture crumbly in the exact same way perfectly-cooked ground beef is.

"We use a lot of the same type of equipment and steps used for [making] traditional burgers," Ethan Brown, founder of Beyond Meat, tells Bustle. "But rather than breaking down meat into smaller parts, we're building it up using the same core building blocks — amino acids, lipids, water, carbohydrates, and trace minerals —that comprise meat. The process is similar to how pasta is made. We mix our simple plant-based ingredients, compress the mixture, and then shape it. The flavors in meat are the result of a reaction of about 600 different molecules. We’ve studied those molecules to identify similar molecules in the plant kingdom and combine them in the same way so they give you that aroma and flavor."

The final product is so similar to beef that it's actually being sold in the meat section in grocery stores. The difference? No animals were harmed in this soy-, gluten- and cholesterol- free 1/4 thick patty, which packs 20 grams of protein and half the saturated fat of a beef burger.

"Oh my God! It looks just like meat! And it smells like it too! Dima, doesn't it smell like meat?" Dima nodded, quietly playing along as the burgers cooked, clearly skeptical.

Beyond Meat's lab is always working to improve the recipe, and it is so eerily on-point that the meat tycoon Tyson recently invested in the company. While some animal rights advocates wondered about the ethics of working with the enemy, most saw that getting big business involved is the only real way to end factory farming as we know it. "We believe Tyson has the ability to help Beyond Meat grow and scale to meet the consumer demand for plant-based protein," Brown says.

To put the Beyond Burger to the test, my partner Jacob and I invited Yulia and Dima, as well as one very special guest: Jacob's old friend Prashant, a longtime vegan. To explain the significance of Prashant trying the Beyond Burger, I'll let an excerpt from the letter my partner Jacob wrote to his friends (the very letter that was so good it turned Yulia vegetarian) tell the story:

Then there was the cameo I played in an incident during college when two guys in the dorm found out that my friend Prashant was vegetarian. They made him a wager. If they could survive two weeks on his diet, he had to survive one evening on theirs. He accepted, probably having calculated the number of animals saved and the possibility that Dave and Nick might see the ease and benefit of half a month on plants. Wager concluded, a group of us huddled around a table at Johnny Rocket’s to witness the vegetarian eat a burger. After his first bite they goaded him, ‘Come on, man. Isn’t that good? You know you like it.’ I hear us in my memory and wonder why were we being jerks to this kid who was plainly trying to be a kind person.

Now that Jacob has himself come around to veganism 15 years later, it only seemed appropriate that he cook the Beyond Burger for Prashant as penitence. As Jacob put them on the skillet, Yulia started to get really excited.

"Oh my God! It looks just like meat! And it smells like it too! Dima, doesn't it smell like meat?" Dima nodded, quietly playing along as the burgers cooked, clearly skeptical.

We opted for a very basic burger — a bun, lettuce, tomato, and ketchup. I wanted Jacob to use the vegan mayo just to dress it up for Dima some more, but he insisted he should taste the burger as much as possible.

When we put it on the bun and gave it to Yulia to taste, here was her immediate reaction:

She was ecstatic, to say the least. She went over to Dima, who was quietly munching on the burger. She widened her eyes, "Doesn't this taste like a burger?" He nodded calmly, chewing his burger.

"This is really good. I have to admit, I would eat this again if you made it," Dima said.

"Did you hear that!? He said he'd eat this if I cooked it for him!" Yulia was super excited, but said she would have to check with him later that he wasn't just saying so for our benefit. (When she did, he confirmed he wasn't lying: though he has refused her other vegetarian cooking, he said he would eat this again, and really wants her to make it.)

Prashant munched on his burger, and I asked him what he thought. "It's good, but it's not like I'd go out of my way to get it. I don't really miss meat or crave it." As a longtime vegetarian, it makes sense — you sort of lose the taste for it. Still, he was impressed — from what he remembered of the burger incident 15 years ago, this is what a burger tasted like.

"Didn't it gross you out when they forced you to eat a burger for the bet?" I asked Prashant.

"No, not really. I sort of psyched myself up beforehand. I reminded myself, This is why I'm doing this, this is how many animals I'm saving by making them follow-through on the bet." As it turned out, one of the carnivores broke his promise on the wager and ate meat. The other kept it, and years later, became a vegetarian.

Chewing my burger — which this time around, creeped me out with its uncanny resemblance less than the first time I tasted it — I wondered if there would also come a day when Yulia ceased to miss burgers. Perhaps; but if not, I'm certainly glad that now she doesn't have to choose between a delicious, meaty-tasting burger, and her principles. Hopefully, as more and more products like the Beyond Burger get developed in labs, even the most diehard carnivores like Dima will have no reason to eat animals one day.

"If you hadn't told me this wasn't a regular burger, I have to admit, I wouldn't have known," Dima told me, having polished off his burger. Tyson is betting on it — and if I had any money to invest, I'd be betting on it too. The future is here, and it's meatless. But you wouldn't even know it.

Some names in this story have been amended to protect the privacy of those mentioned.