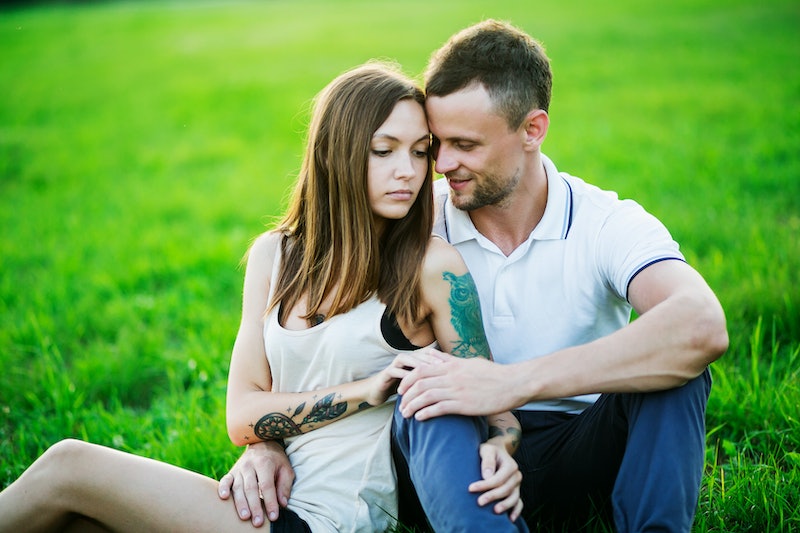 Although the idea of being happy and fulfilled in your relationship forever is beautiful in theory, that’s no always how things turn out. Relationships that were once tremendously fulfilling can, over time, become anything but that. Then, before you know it, you’re sitting there realizing you don’t even know the last time you felt satisfied in your relationship. Has it been months? Years?

“Feeling fulfilled in your relationship can often be something quite unnoticed,” Psychosexual & Relationship Therapist and Founding Partner of Pillow Play app, Kate Moyle, tells Bustle. “And we rarely stop and take stock unless we are unhappy about something. A lack of balance can indicate that someone is feeling unfulfilled, often in relationships there are roles for partners, not necessarily dependent on gender but each partner has their role and contribution to the relationship.”

But eventually, even if it takes a while, signs start to pop up that force you to come to the realization that you're not as fulfilled in your relationship as you thought. Here's what experts had to say on the subject and here are the signs you need to notice.

Because of that aforementioned unbalance, according to Moyle, resentment can build up. “Arguments start to happen about the smallest things… usually under the surface this is because the person is feeling unappreciated,” says Moyle. “This is a good time to stop and talk about what is actually going on, so instead of attacking and saying 'you do X' having a conversation around 'when you do X it makes me feel Y' getting to the root of the small arguments before they build up into big ones.” A fulfilling relationship is one in which both people feel appreciated, equally.

Although sex isn't the only thing in a relationship, if your sex life isn’t what it used to be, then that’s a sign worth taking to heart.

“In a strong, fulfilled relationship, sex is not just about the physical,” Relationship Coach Chris Armstrong tells Bustle. “It is also about the emotional and intellectual connection that you feel with your partner. These two things, when strong, reverberate in the bedroom. Once they are lacking however, the relationship becomes less substantive and the sex begins feeling mechanical, even boring.”

3. You No Longer Feel Challenged

Well, if you don’t have that emotional and intellectual connection that Armstrong mentions that’s making things difficult in the bedroom, then it’s safe to assume that the connection is gone outside the bedroom, too. It’s hard to feel fulfilled if you’re not feeling challenged by your partner.

4. You Avoid Your Partner A Little Too Much

So, the sex is bad, you’re arguing over absurd little things, and you’re not feeling challenged. What’s next? You probably don’t want to spend too much time with your partner anymore.

“It used to be that you could not wait until you got home and saw your partner,” says Armstrong. “Now, you find reasons and ways to spend less time with them. You stay late at work, you go out more with your friends—anything to fill the void that currently exists because you are unfulfilled in your relationship.”

5. You Do What You Can To Escape

For a lot of people, when things start to fall apart in their personal life, trying to escape seems like a good idea. Whether that escape comes in spending more time away from them or slipping into some bad behavior, it’s definitely a sign that something is not right at home. So another big sign?

“You have to drink in order to feel anything,” says Armstrong. “If you cannot feel connected or have fun with your partner without drinking, there is something missing — your relationship is unfulfilled."

Be sure to check in about how you're feeling and don't be afraid to communicate to your partner that you want to make some changes. You deserve to have a fulfilling relationship.