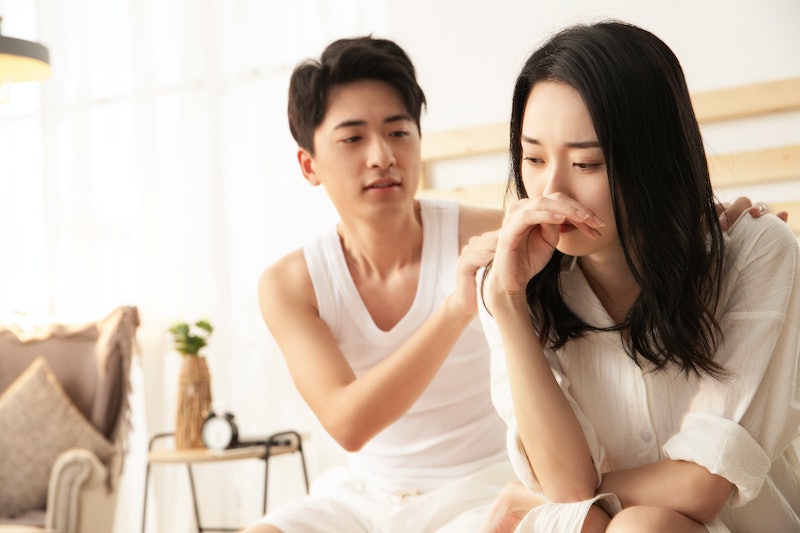 Though it might seem as straight-forward as "I am always mad at you because you never remember to take out the trash," the psychology of resentment in relationships is more complex than it looks at first glance. Resenting somebody isn't as simple as disliking them, or finding them annoying; it's a feeling that is actually related to the repetition of painful patterns relating to unaddressed difficulties. Yep, I know that may sound hideously complex, but it's a relatively simple concept once you unpack it. And you should take the time to unpack it — because the truth is that resenting your partner (even if you don't realize that you're doing it) isn't great for your love life. But there is a bright side: Your relationship isn't doomed if you realize that you've been feeling resentful; you can notice and resolve your resentment.

Resentment isn't just about the specific details of your own day-to-day life, though; it is also often related to gender roles and embedded inequality. A famous (and upsetting) study from 2013, for example, found that heterosexual men sometimes feel subconscious distress and resentment when their female partners succeed, even if they consciously believe that they're cool with it. The researchers involved thought that the distress likely came from societal programming about men's role in families and relationships — even if the men themselves were deeply feminist. And while women are becoming less likely to bear the burden of sacrifices for a relationship or work-life balance entirely on their own, a 2015 study found that cultural expectations about women, housework and childcare are definitely still powerful forces that may create serious resentment issues. But, as we'll discover, couples can develop resentments about virtually anything.

How do you know that you're resenting your partner if you aren't, say, actually poking a voodoo doll with their name on it every night? There are some common psychological cues to look out for. If you're recycling the same anger over and over again without resolving it, the chances are strong that you've got a big case of the resentments. Read on to see if any of the four signs below resonate with you — and find out what you can do about them.

1. You Dwell On How They've Upset You

In psychology, the concept of resentment isn't necessarily about a single feeling; rather, it refers to a process of "chewing on" a particular sentiment without allowing any resolution. Mark Sichel, LCSW, gave one of the clearest definitions of resentment to Psychology Today:

"Resentment refers to the mental process of repetitively replaying a feeling, and the events leading up to it, that goads or angers us. We don't replay a cool litany of facts in resentment; we re-experience and relive them in ways that affect us emotionally, physiologically, and spiritually in very destructive ways."

The reiteration of anger is the key pattern in feeling resentment, and the constant return of annoying or upsetting memories is the most distinctive sign that it's present in your feelings towards your partner. If you find yourself constantly returning to particular incidents (say, that time you gave up a job to move to their city, or the time they forgot your birthday), you've started to feel resentment.

Resentment is also often tied to regret, the sensation of anger or misery in response to a belief that something crucial has not been done. If your regrets are related to the decisions you've made as regards your relationship (i.e. "why didn't I take that job in Antarctica when I had the chance?"), they're likely at the center of the resentment.

2. Your Conversations Have A Loaded Edge

The psychological truth about resentment between couples is that it's often not "open" or well-voiced; it tends to be more hidden and subtle. In Relationships And Patterns Of Conflict Resolution, a classic reference book for couples counselors, author Dr. Peter Ladd explains that resentment is actually a form of "civilized anger;" rather like passive aggression, it conceals the strength of its negative emotions rather than displaying them openly.

Ladd also points out that resentment tends to fit well with what's called an "avoidance conflict resolution style." Conflict resolution styles are a way of describing the different ways in which people try to solve fights, whether it's with their workmates or their partners. There are four different styles of conflict resolution: competition, collaboration, accommodation, and avoidance. People who use the last style tend to be passive, unwilling to actually confront anything, and often deflect or try to escape dealing with the issue. If that sounds like you dealing with problems in your relationship, resentment can creep in very easily.

Ladd explains that if you're in a relationship where you both try to avoid conflict as much as possible, your "normal" conversations about topics that shouldn't induce anger might show off your resentment anyway, by being weirdly nasty. "It allows [resentful partners] to release their frustration and anger without officially declaring that problems exist," he says.

3. You Can't Seem To Shift The Pattern

Guilt and resentment are often the two halves of the same problem. Say, for example, one partner earns more than the other, leaving the lower-earning one feeling resentful and the higher-earning one feeling guilty. Psychology Today calls this "the dance between guilt and resentment," and points out that it's not just about romantic relationships; it's also common among people caring for relatives or taking on the burden of childcare.

This makes sense, if you think about it: resentment keeps returning to the same issue because nothing has fundamentally changed about the problem. An apology hasn't been made, the structure of responsibility hasn't been shifted, and your partner hasn't tried to find ways to make you feel better about it (or if they have, it hasn't worked). So you just return to the same anger over and over again.

This unchanging element is why the Counseling Directory UK calls resentment the "cancer of relationships": if untreated, it can eat away at your partnership until it dies. Mark Sichel outlines three of the most common causes of resentment: a partner doing a mean or thoughtless thing, a partner not doing an essential thing, or a partner generally not "doing enough". And if you don't manage to deal with resentment in your relationship, you will genuinely make it worse, according to psychologist Dr. Oren Amitay:

"If the resentment and its cause(s) are not addressed adaptively, the aggrieved person will not feel a sense of validation by their partner — especially if the offence was unintentional or due to a misunderstanding that the partner was not aware of. This lack of validation then serves to increase the feelings of resentment, which in turn further fuels the unconscious or conscious retaliation."

How Can You Get Past Resentment?

Tellingly, the main strategies suggested by Terry Gaspard at the Huffington Post to move past resentment all involve addressing and taking responsibility for the core issue in some way. Essentially, both partners need to openly discuss the problem and why it hurts, make sure to not dismiss each other's feelings, be empathetic, try to forgive, and communicate about the problem in future. Without that, the general psychological consensus is that your resentment will likely fester and eventually destroy the relationship.

The good thing is that, regardless of what you resent — a cruel comment, an earning or housework disparity, a lack of interest in sex, or something else — it seems to be viable to fix. According to Dr Steven Stosny at Psychology Today, it's crucial for couples to communicate in order to replace resentment with compassion and empathy, which are necessary ingredients for good relationships. And if you can't do it on your own, there's no shame in entering relationship counseling. Resentful relationships don't fix themselves; but if you're willing to put in the work, the prognosis is very good.