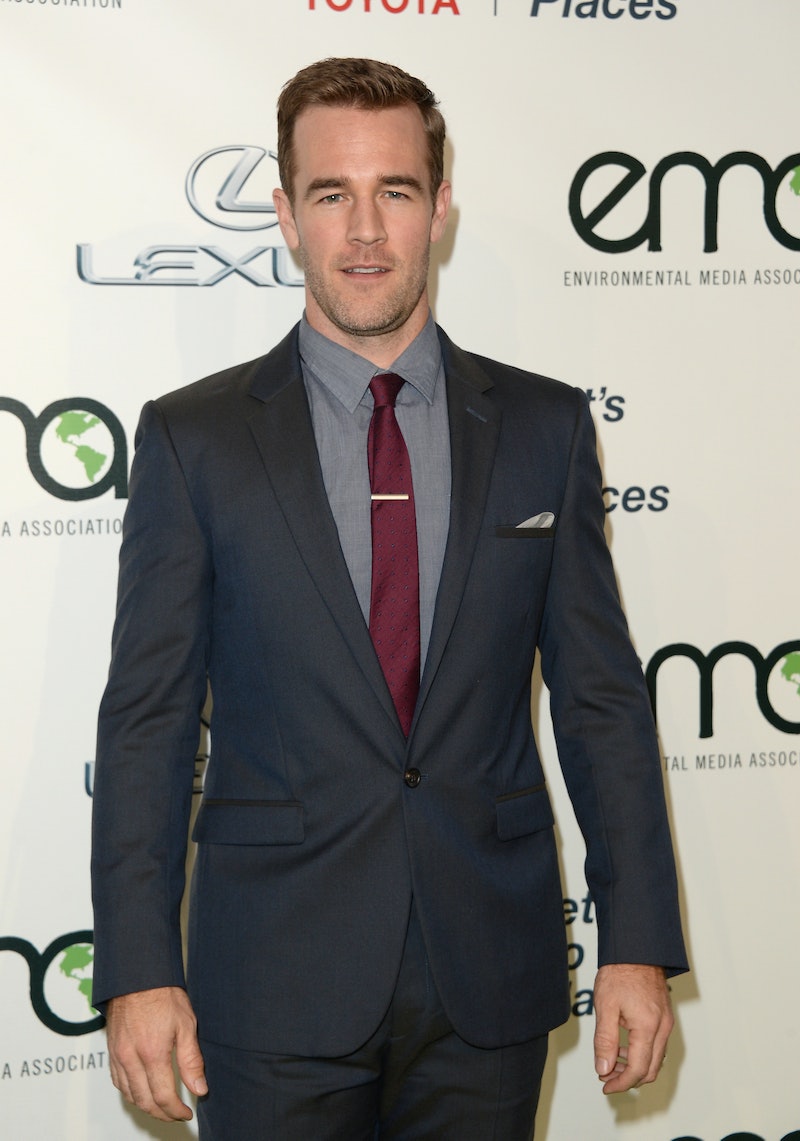 Can you believe that there was once a time when Justin Timberlake couldn't get into a club just for being JT? Yeah, me neither — but apparently it was sometime in 1998 before 'NSYNC tore up our hearts. In a chat with HuffPostLive on Wednesday, James Van Der Beek shared that he once snuck a young Justin Timberlake into a Las Vegas club. Who knew Van Der Beek was so cool?

There were definitely perks to being a young, up-and-coming celebrity in the late '90s. The former Dawson's Creek and Don't Trust the B---- in Apt 23 star told the site that he was in Las Vegas for New Years when someone told him that 'NSYNC wanted to meet him. Apparently, this was around 1998 and according to Van Der Beek, JT's boyband "was the second to the Backstreet Boys" — which we refuse to believe, but whatever. So here's pretty much what went down:

So, I said, "OK." And I met them and they were so sweet. They were so nice. They were such cool kids and I immediately liked them. I remember that night, we were all going to some club and they were all too young. And so I went in and somehow passed my I.D. back so that Justin could get in with my I.D. Justin used it to get in and then tried to pass it off to [Lance Bass] to get in. By the third time [the bouncers] saw a James Van Der Beek I.D., they were like, "Ah, I don't think so, James."

First of all, this is amazing — how did no one recognize Van Der Beek/how did JT manage to get past a bouncer with his ID? And the craziest part of all of this — WHO GIVES THEIR ID TO SOMEONE THEY JUST MET? Props to you, Dawson, you are one cool dude and apparently the older brother of all '90s ramen-hair-having future stars. (Also, what was Lance Bass thinking? C'mon.)

But before you start to freak out about JT and Dawson clubbing together — listen to this crazy connection that might make James Van Der Beek the new Six Degrees of Separation guy. Melissa Joan Hart credits Van Der Beek as her first onscreen kiss but thats not all they have in common. Now it seems that Hart and Van Der Beek share an interest in sneaking underage kids into nightclubs. According Hart's 2013 memoir about her crazy party lifestyle in Hollywood, she was the first person to ever sneak Britney Spears into a club. Hart was six years older than Spears when she snuck her through the backdoor of Club Cherry in LA.

So, Hart and Van Der Beek kissed during their late '90s/early '00s prime and both snuck future famous teens into respective nightclubs — and those famous teens KISSED and became a very-public poster-relationship for the boyband and pop princess era. So they're just one, big, happy, kissing family of club-going party animals. But again, it gets better.

According to 2002 reports and the following SNL spoof — JT and Spears ran into each other for the first time since news of Brit's infidelity broke up their relationship AT A CLUB. (Wow, how things come full-circle.) The "Oops I Did It Again" singer caught her former boyfriend dancing with the future Mrs. Channing Tatum (Jenna Dewan) and insults were slung from both parties. And their confrontation ended in the only way fit for bubblegum pop's most famous relationship — with a dance-off. There's no actual, visual evidence of said dance-off — but we can pretty much imagine how it went down.

So, when JT and Spears were legally allowed into the clubs, they were too busy battling out their relationship problems to usher in a new era of underage partiers. Maybe they just didn't know anyone that was worthy OR the next generation didn't even need them. But one of Spears' 2007 clubbing posse kept the tradition alive — in case you forgot, Spears once partied with sex-list writing Lindsay Lohan and Paris Hilton during the late '00s. Well, Lohan is keeping the tradition of partying with underage former-Disney stars alive — in October 2013, the Mean Girls star partied with one, Miley Cyrus, at 1OAK in NYC while Cyrus was still underage.

So what can we take from all of this? Former-Disney child stars love to party underage and "Six Degrees of James Van Der Beek" should be a new thing. (Stay tuned.)