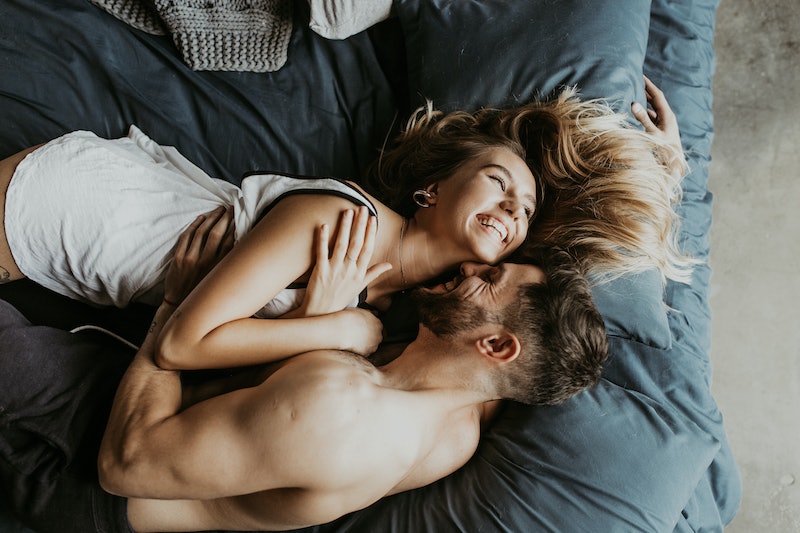 Why does sex make us feel so good? I know if anyone ever asked me that question, I’d probably respond with a simple, “It just does.” But it is interesting to think about what happens to your brain when you orgasm. In fact, there’s a reason why sexual pleasure can put you in an intense trance-like state, new research from Northwestern University finds, and it all starts in your brain.

In a study published in the journal Socioaffective Neuroscience and Psychology’s special issue “Orgasm: Neurophysiological, Psychological, and Evolutionary Perspectives, Adam Safron, a neuroscientist and Ph.D. candidate at Northwestern University went through years of studies and previous research on the relationship between sexual activity and brain functions. In doing so, he came up with a model showing how rhythmic sexual activity may influences brain rhythms. What this means is, if you stimulate something long enough, over and over again with the right amount of intensity, the synchronicity can spread throughout your brain in an effect called “neural entrainment.” When that happens, you can lose focus and your sense of consciousness can be overcome by the sensations caused by sexual activity. That’s what triggers orgasms.

“The idea that sexual experiences can be like trance states is in some ways ancient. Turns out this idea is supported by modern understandings of neuroscience,” Safron said in a release. “In theory, this could change the way people view their sexuality. Sex is a source of pleasurable sensations and emotional connection, but beyond that, it’s actually an altered state of consciousness.”

The reason why orgasms feel so good is because you're allowing your body to solely focus on the sensations caused by it. So if you’ve ever wondered why sex kind of sucks when you’re overthinking things or you're stressed, that has a lot to do with it. If you’re not at a certain point of consciousness, your brain makes it pretty hard for you to come. That's probably why numerous sex therapists place an importance on relaxation and getting in the right mindset during sex. If you're in your head too much, it's going to be hard for you to let go and let that orgasm happen.

Safron’s study also found certain parallels between orgasms, seizures, music, and dance. Because of that, Safron believes his research could help improve sexual function in people by telling them to focus on the more “rhythmic aspects of sexuality.” As it turns out, many women already do. A 2015 study conducted by OMGYES actually found that 80 percent of women use a “rhythm” technique to orgasm. Meaning they repeat the same motion over and over again until they finally reach the big O. So while it’s nice to shake it up once in a while by adding a new sensation here or there, if something feels good, it feels good. Why mess with a good thing?

While Safron’s recent study gives us an interesting model into how orgasms are triggered by the brain, Nicole Prause, Ph.D., founder of sexual biotech company, Liberos LLC tells Bustle, “Actually no one has captured the brain at orgasm. Only two labs have tried and one decided he could not reliably see the signal (Georgiadis) and the others have been widely criticized as publishing movement (ie., error).” So, in general, it’s still kind of a mystery. It may still take a while for scientists to figure out what really happens to our brains when we orgasm, but here’s what we do know so far:

1. Orgasms Lead To Less Oxygen In The Brain

“Immediately AFTER orgasm there is lesser oxygenation in the brain and soon after that an increase in activity of dopamine receptors that help us learn,” Prause says. As she also notes, dopamine is not for pleasure, as it's often misprinted.

2. Orgasms Can Lead To Oxytocin Overload In The Brain

“The first thing that comes to mind are fireworks,” board certified sex therapist and licensed psychotherapist, Gabriela Galvan de Antillon MS, LMHC tells Bustle. At the point of orgasm, the hypothalamus is hit with surges of oxytocin. Sometimes, it’s so much more oxytocin than your brain thinks it can handle. So in the cases of super intense orgasms, some people may feel an almost euphoric or out of body experience.

“It feels so good to have it in your brain that you know you want to go at it again as soon as possible,” Galvan de Antillon says.

3. Orgasms Light Areas Of The Brain Up Depending On Where You’re Touched

"The sensory motor strip between the two hemispheres is the sensory representation of the genitals,” neurofeedback specialist, Dr. Lynette Louise, PhD aka “The Brain Broad” tells Bustle. During sex that area of the brain lights up, but so do other areas depending on where you're being touched. “In many ways this becomes the sexual pleasure center,” Louise says. Also during orgasm, the hypo-gastric nerve fires and neurochemicals invade the brain hitting various areas, one of which is the Nucleus Accumbens, otherwise known as “the reward center.”

I think all of this proves that orgasms are more complicated than you might think. While orgasms can make your brain light up in all kinds of ways, getting there can be difficult if you tend to overthink things. If you’re a person who’s guilty of that, Louise has some suggestions: "Focus on your hands. Touch your partner and yourself. It's OK to be in your head, but you want to be in your head through your body's sensory system."

So orgasms feel really good because the sensations leading up to them activate the reward center in our brains. In order to get there faster, it’s best to allow yourself to let go, feel, and let your brain take care of the rest.