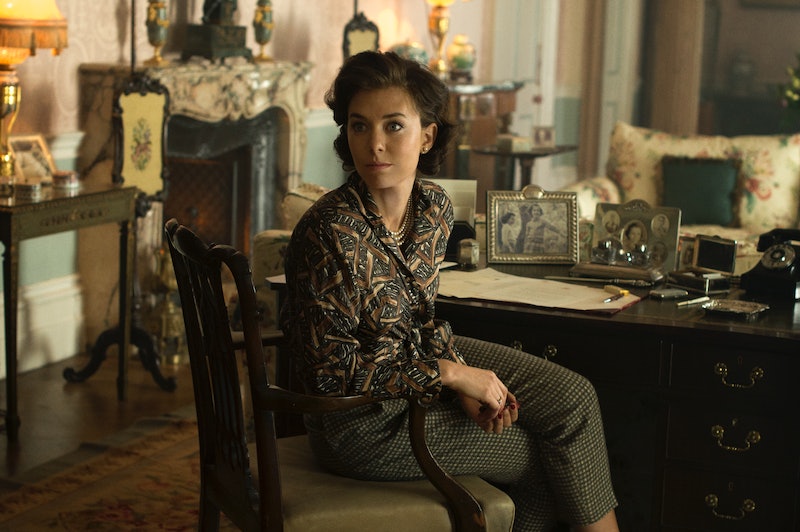 As a big anglophile, I’m absolutely thrilled at any movie or television series that features Queen Elizabeth II or Princess Diana or Prince Charles or literally any other member of the British royal family — even Prince Andrew. I’m really excited for The Crown , Netflix’s new streaming drama series, and its Season 1 focus on Queen Elizabeth II’s ascension to the throne and how it affected her personal life. With six seasons planned, the series will eventually bring viewers into the present day, but that's a lot of Queen Elizabeth II. In fact, there have been many portrayals of the British royal family on stage and screen — can we expect anything new or fresh from The Crown? At a Netflix junket, cast members Vanessa Kirby (who plays Princess Margaret) and Jared Harris (who plays King George VI) weighed in on the emotional edge that makes The Crown different. (A rep for the royals noted that "The Crown is a fictional drama. The Royal Household has had no involvement.")

Most depictions of the royals show them as people who are sworn to duty, with no room for feelings or emotional ties to those around them. I get that — their family is their blood family, but it’s also an entire nation. The royals are responsible first to their country, but they’re people, too. How does The Crown deal with this dichotomy? “I think what sets it apart from the others is that it isn't the upstairs downstairs sort of stiff upper lip where everyone is dealing with repressed emotions,” says Harris. “The stakes are really clear and you can really that and the way that the characters are dealing with that. It isn't something where an emotion is conveyed in a gesture or something like that. These people are fully engaged emotionally in their lives and we can feel that.”

Kirby seconds that notion, noting that viewers will see beyond the titles of Princess Margaret and Queen Elizabeth II and see the people underneath. “For me, when I watched it, I knew they were the Royal Family,” says Kirby. “But I stopped watching it as if they were royal and just became completely fascinated with their journeys, their human relationships, and with the psychology of each of the characters.” At the most foundational level, the British royal family is a family just like any other, adds Kirby, saying, “It's a family that's going through very many obstacles and problems and psychological trauma.”

The cast of The Crown is extraordinary in their depictions of the Windsors (that’s their surname, if you didn’t know), and, according to Harris, it was a wonderful challenge to tackle the double lives of the monarchy. “The contrast between the public and the private is what makes it interesting and fun to do, because you're always looking for that in roles anyway,” says Harris. “It was fun because it allowed you to enjoy the people that you were with more, rather than always having this little tick in your mind that you had to start the motor over again.” Kirby agrees with the notion that the cast became their own little royal family. “Allowing time for the relationships we formed as a group was great. We all became so close,” she says. “I adore Jared, and he plays my dad. So, it was really easy… because I just looked at him and I knew in the circumstances he was ill and I wanted him to be better.”

It seems that The Crown eschews the typical emotionless stereotypes of the British monarchy in favor of a well-rounded and more human approach. Those who believe in monarchies believe that kings ascend to the throne because they are decreed by God to do so, but at the end of the day, that head that wears the heavy crown is a human one. Seeing the Windsors as people first is an interesting angle into a well-trodden subject matter.