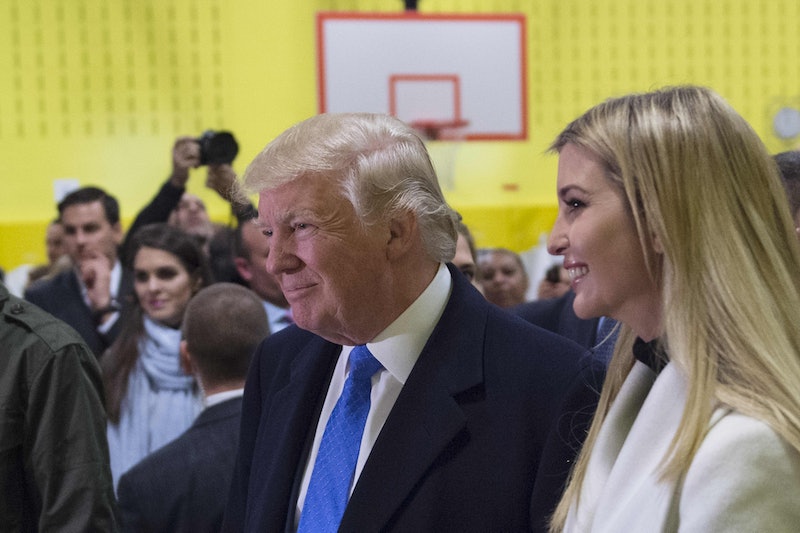 There are countless Americans who are disappointed and terrified of what will come with a Trump presidency. This group includes lawmakers, many of whom have expressed deep concerns about Trump's fitness for office. So it's not all that surprising that talk of presumptive president-elect Donald Trump's impeachment has already begun.

Despite Trump's litany of questionable (and sometimes illegal) claims about what he would do in office, the road to impeachment starts, according to Bruce Fein, with public opinion. Fein worked in the Justice Department during Ronald Reagan's presidency, and was also involved in the Republican-led effort to impeach Bill Clinton. In an article by Darren Samuelsohn at Politico, Fein prioritized public sentiment as the primary precursor to impeachment, saying, "Ninety-nine percent of the game is how popular is the president."

It is not difficult to imagine Trump's popularity plummeting after the election. If the economy tanked, or if Trump did institute the use of torture, or if he did order the illegal targeting of family members of terrorists, public sentiment would likely turn on him pretty quickly. There are plenty of other scenarios that could also cause a majority of Americans to pull support from Trump (more leaked video tapes from his time at NBC, more women coming forward with claims that they had been harassed by Trump in the past, etc.).

Once the polls show Trump in the proverbial dog house, politicians would need the motivation to move forward with impeachment. Those proceedings begin in the House of Representatives, currently led by Republican Speaker Paul Ryan. But why would a Republican go ahead with impeaching a president from his own party? Well, perhaps because that president made said Republican's life a living nightmare for pretty much the duration of the campaign season. It's no secret that Ryan and Trump are not friends. The two have been as openly hostile toward each other as any duo in modern memory, with Ryan initially refusing to endorse Trump, and Trump returning the favor. Trump has arguably spent more time during his campaign bashing "establishment" Republicans (like Ryan) than he has attacking Democrats. And most recently, Ryan disinvited Trump from what was supposed to be a joint campaign event.

Still, even with the disgust of the populace and the animosity of Congress, in order to impeach a president, "high crimes and misdemeanors" must have been committed. On that count, Trump is almost eminently impeachable. Law professor, Christopher L. Peterson of the University of Utah, is already putting forth his argument for Trump's hypothetical impeachment. Peterson references the ongoing lawsuits against Trump for his now-defunct Trump University (aka scam) as possible grounds to bring charges against a future President Trump:

The evidence indicates that Trump University used a systemic pattern of fraudulent representations to trick thousands of families into investing in a program that can be argued was a sham... Fraud and racketeering are serious crimes that legally rise to the level of impeachable acts.

It is even possible that impeaching a President Trump was a backup plan of some Republicans all along. Both liberal and conservative websites have highlighted the possibility. They note that the choice of mild-mannered, ultra-conservative Mike Pence as Trump's vice presidential running mate would give those Republican congresspeople who are frustrated and/or embarrassed by Trump good reason to oust him, should he become the next POTUS.

Given the unique feud between Donald Trump and many members of his own party, impeachment is a more likely possibility than usual. But add to that Trump's rare ability to offend wide swaths of the population, plus the fraud cases against him, and the odds of a President Trump impeachment seem very high.