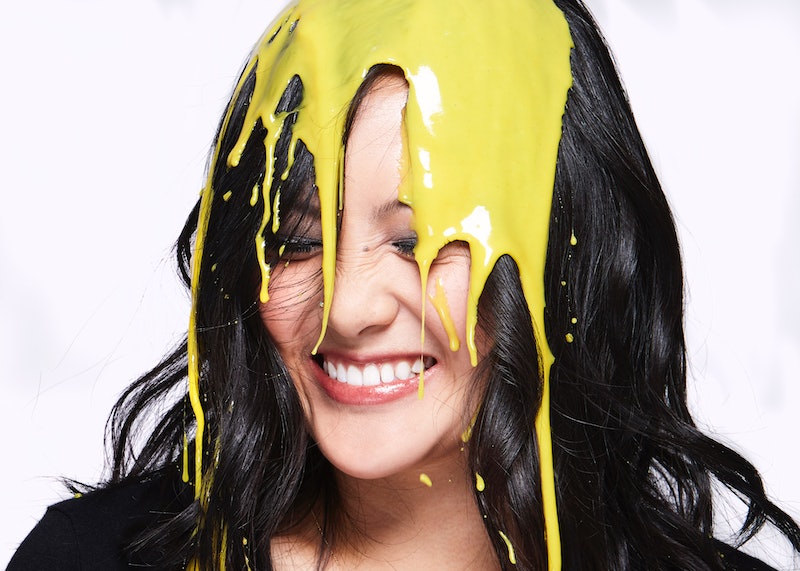 Jenny Dorsey scored her dream job in management consulting right out of college — and she was miserable. “I had this notion in my head that this was just the best,” she tells Bustle. “But after I started working there and got everything I wanted, I realized I didn’t actually like my job. I didn’t care about anything that I used to tell myself that I cared about.”

So Dorsey went back to the one thing she knew she loved to do, and she went to culinary school. "I had studied abroad in Rome [in college] and really fell in love with food,” she says. “I cooked a lot, but I always dismissed it as this thing that I liked to do. As I was taking these classes and also at the same time realizing, 'oh my god, I hate my life,' I woke up and was like, 'You know what? Why don’t I actually do this?'”

And she did. Today, Dorsey runs her own culinary consulting business, as well as the signature supper club she started with her husband, I Forgot It’s Wednesday. Her culinary expertise, management skills, and tenacity allowed her to build a career customized to her talents, rather than trying to fit herself into a job that doesn’t serve her — one of many reasons why we’re profiling her for "Crafts Undiscovered," a profile series we've created in collaboration with Don Julio.

When Don Julio González set out to distill tequila, he didn’t just want to follow tradition — he wanted to layer on a unique process, which set him apart in the industry. González invented luxury tequila, and today, Don Julio is the most consumed high end tequila brand in Mexico, and one of the fastest growing in the U.S.

Dorsey’s inventive recipes and entrepreneurial spirit have also made her a key player in her industry, earning her accolades for her recipes as well as awards for her underground supper club. Here’s what she has to say about the art of crafting a dish that stands out, her creative process, and paving her own way.

“The first one was total chaos.”

The idea for Dorsey’s underground supper club, I Forgot It’s Wednesday, spurred from her need for more practice in the kitchen, and the desire to bring people together: “My husband has always been into mixology,” she says, “and he wanted to make drinks. Since I didn’t have much experience cooking for a group of people, we thought it would be a good way to bring our friends together.”

It was certainly a learning experience. “The first one was total chaos,” says Dorsey. “Food came out in a weird order, and it was a total disaster — but our friends gave us feedback and started inviting friends of friends, and by the end of the month we were feeding strangers.”

What started as a group of friends getting together to sample Dorsey's practice dishes quickly grew. “After six months we did this big, 100-person pop-up dinner,” she says. Soon enough, Dorsey and her husband took the show on the road, hosting the supper club in San Francisco. It was then featured as one of the best supper clubs in SF in 7x7 Magazine; it was also featured in SF Weekly. Now, they're back in NYC and show no signs of slowing down.

“Since then it’s been a steady stream of interest,” she says. “It’s our passion project since we both work full time, so we’ve had to scale back in terms of how often we do it. But events sell out really fast. People are excited about it."

For each dish that she constructs, Dorsey aims to bring something that her diners haven’t experienced into the meal — whether it’s a flavor from a faraway country, or a new take on a classic. “I want people to eat something that they haven’t had before,” she says, “to show people something they haven’t had in a new way, whether it’s plating it differently or adding a couple new flavors.” One of her favorite creations of late was inspired by the flavors found in a traditionally fermented Thai sausage. “It’s called naem sausage, and it’s kind of sour and sticky,” she explains, “done with a very classic fermentation process from Thailand where you take meat of some sort and pack it with rice and garlic. I really wanted it to be the star of a dish, so I thought, what if I used it in a pasta bolognese sauce? It has that brown meat texture, but would be a really different taste.”

Next, she got to thinking about which pasta she’d use in the dish. “I didn’t want to just use spaghetti, so I made this homemade ricotta cavatelli that has miso in it, which also has that interesting fermented taste and balanced out the sausage," she says. "I wanted it to look like bolognese, which made me think of romesco sauce from Spain, which is a good covering sauce that's very rounded and would let all the other flavors shine." She adds: "Sometimes restaurants make a dish this molecular feat, and it becomes too much. I just like to make sure things are interesting.”

“There’s never a good time to pursue your dreams.”

“There’s never a good time to pursue your dreams,” says Dorsey. “No one is going to look out for your career except for you. There are a lot of chefs in the industry. Being a chef is hard. Cooking is hard. You’re in the kitchen for a long time. At the end of the day, a lot of people stay at places way longer than they really should. Sometimes you have to make that hard choice and do the right thing for you. Working in an industry that’s so hierarchical, it’s so hard for young cooks to break away and do their own thing. It’s always going to be inconvenient to take this big risk, so there’s no better time than doing it right now.”

More like this
Learning To Love, Not Judge, The Lunchbox Wives Of TikTok
By Esther Zuckerman
16 Trader Joe's Appetizers That Are Total Party-Pleasers
By Kaitlyn Wylde
Dolly Parton Released 4 New Baking Mixes With Duncan Hines
By Alexis Morillo
An Expert Weighs In On The Viral Raw Carrot Salad Trend
By Alexis Morillo
Get Even More From Bustle — Sign Up For The Newsletter
From hair trends to relationship advice, our daily newsletter has everything you need to sound like a person who’s on TikTok, even if you aren’t.