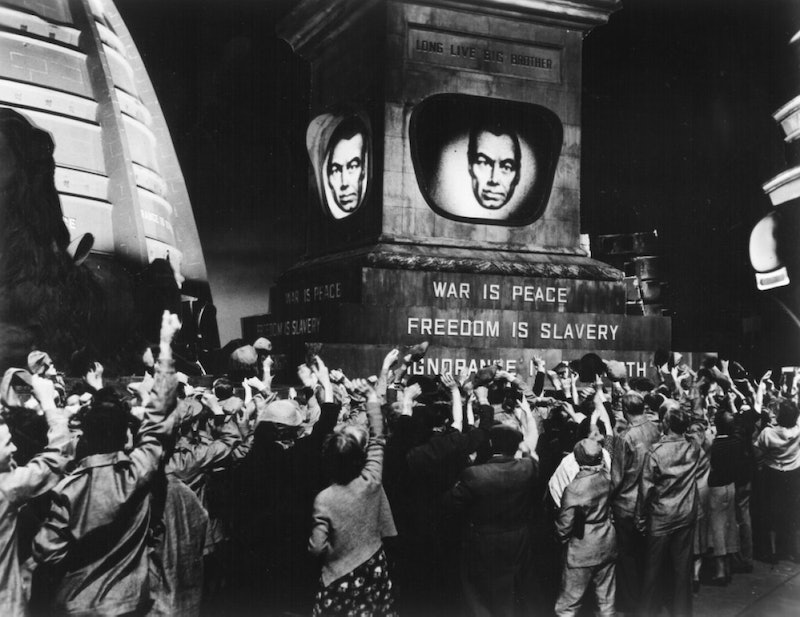 Literature, particularly science fiction, has a long history of predicting the future. Ray Bradbury invented a form of earbuds in Fahrenheit 451; Edward Bellamy foreshadowed credit cards in Looking Backward; and William Gibson pretty much nailed what the internet would look like in his 1984 novel Neuromancer. Then of course, there's George Orwell. In the mid-20th century, George Orwell wrote a book about an ominous future society that featured a watchful Big Brother, crazy war propaganda, and sheep-like citizens. The dystopian cult classic painted a chilling but fictional picture that even the New York Times called an "excess of satire" upon its release in 1949.

The novel, which was meant as a satire of the political climate in which it was written, has somehow withheld the test of time. From the way that citizens in 1984 follow their fearful leader without question, like most of us dutifully follow the law, to the book's eerily watchful technology that tracks your every move, similar to how satellites and the internet track us today, there are a number of striking comparisons.

At a glance, the society is laughably exaggerated but with a deeper analysis of the metaphors that Orwell create, readers are able to draw uncanny similarities to the present day and we've gathered the five biggest similarities below.

The most blatant parallel that one can draw from 1984 is the use of two-way televisions called telescreens. The telescreens are used for entertainment and are found in the everyone's home but they simultaneously watch your every move. The screens pick up both video and audio, making it impossible to do anything without the fictional government, Ingsoc, seeing.

While our televisions don't do this — as far as we know — another popular device works the exact same way: computers. Our computers themselves can easily be hacked, as evidenced by the case of Cassidy Wolf, the Miss Teen USA winner who had her webcam hacked and was being watched without her knowledge for a year. Likewise, our actions on the internet are vulnerable. Networks can pick up on our locations, track our searches and store our emails.

In 1984, the totalitarian rule has gone so far as to create a completely new language with the purpose of confusing and persuading it's citizens. The language, Newspeak, follows the same general rules and patterns as English but it eliminates all negative words, to minimize the possibility of "crimethink" — a.k.a. having rebellious thoughts that don't align with Ingsoc's ideology. For example, "bad" is "ungood" in Newspeak.

The trick of Newspeak is that it is similar enough to be recognizable but altered enough to encourage a specific way of thinking. Today, the media uses the same techniques to persuade consumers. Television stations will use specific words to describe a group of people that creates praise for one set of people and inherent disdain for another. For example, the media will likely call attention to religion when the perpetrator of a crime happens to be Muslim. That inherently leads to Islamaphobia by constantly associating the religion with violent crimes.

In Orwell's novel there are three sovereign nations: Oceania, Eurasia, and Eastasia. At any given moment, two nations are at war. The fighting is continuous. But when a new battle arises, everyone forgets about the past wars and alliances and focuses on the battle at hand, leaving the world in perpetual turmoil.

The proles are a group of workers who are overtly happy because they are clueless. Big Brother (the watchful eye of Ingsoc) doesn't bother the proles because they do not complain or cause trouble, as long as they are fed. The proles symbolize mindless followers of the working class.

Despite the tense and ever-changing political climate of today's society, many people are willfully uninformed. According to a 2016 Pew Research study, only 20% of Americans still read newspapers, while 62% look to social media to receive news. Whether it's due to a lack of time or energy, a large portion of Americans would rather not seek out news. Ignorance is bliss.

Where there are followers, there must always be leaders. The small group of rebellious outcasts, ironically call themselves "the Brotherhood." The Brotherhood vehemently opposes the party. They meet in secret, pass around literature, and plot to overthrow Ingsoc. Although Big Brother paints the group as sinister, they are actually just activists fighting for basic human liberties.

Likewise, we have plenty of individuals who stand up and speak out against policies and laws that they believe violate civil rights. Many people are kicking butt in the name of equality: for women, for POC, for LGBTQ people — to name a few. It may not be an exclusive "group" but there is a new wave of activism that garners increased support everyday, just like the Brotherhood.