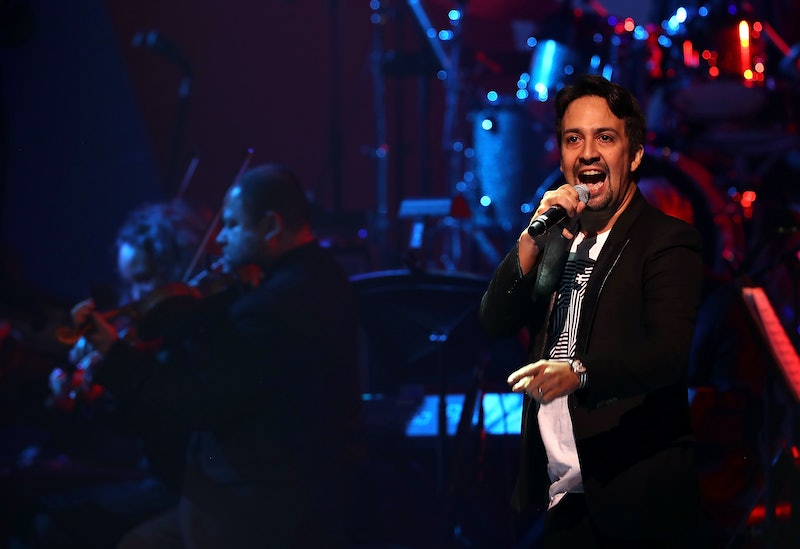 Most of us may not have had the privilege of being in the Room Where It Happened yet, given that tickets are currently going for approximately seven gajillion dollars, but now you can have the next best thing right in your own living room: a Hamilton mixtape. The show's composer, Lin-Manuel Miranda, announced the existence of the hotly-anticipated new album over a year ago, in October 2015, teasing that it would contain "remixes, covers, and inspired bys"… and now it's here, available for preorder this Friday, Nov. 4, for release, at least in the U.K., on Dec. 2 — just in time for the holidays. But with the official track list finally revealed, you're probably wondering about all those new songs on the Hamilton Mixtape that aren't on the original Broadway soundtrack.

The 23-song album contains plenty of fan-favorite titles, including showstoppers like "Satisfied," "Wait For It," and "Burn," which will be covered by Sia, Usher, and Andra Day, respectively. It also contains titles that will sound familiar to fans of the musical, even if they don't quite match the song titles we've come to know and love, including "Say Yes To This" (instead of "Say No To This"), "Immigrants (We Get The Job Done)" (a line from "Battle of Yorktown"), "Washingtons By Your Side" (instead of "Washington On Your Side"), and "Wrote My Way Out" (a line from the song "Hurricane") — presumably the remixes mentioned by Miranda in his announcement.

But then there are the titles that will be utterly foreign even to fans who have been playing the Hamilton soundtrack on repeat for the last 14 months in a row. These must be the "inspired bys" Miranda promised. But what are they, exactly? Let's look at what we know about the mixtape's five mystery tracks.

Trumbull was a painter during the 1700s who is responsible for illustrations on two pieces of American currency: his depiction of the signing of the Declaration Of Independence on the back of the $2 bill… and his portrait of Alexander Hamilton on the front of the $10 bill. Expect The Roots to start off the Mixtape with a tribute to the man who gave us our immortal image of the "$10 Founding Father without a father."

According to Billboard, Miranda said that a number of "unused demos" would be incorporated into the mixtape as "interludes" between more recognizable numbers. Presumably this is one of those, but who exactly the letter is written by — or addressed to — will remain a mystery until we hear the song for ourselves.

Valley Forge was the location of a military encampment just outside of Philadelphia used by General George Washington and the Continental Army during the winter of 1777, infamous for its strategically poor selection, since it didn't provide much in the way of resources and shelter. Approximately 2,000 soldiers lost their lives to malnutrition, disease, and exposure during those brutally cold months despite no battle being fought. I'm sure Miranda will have a lot to teach us about this pivotal moment in the Revolutionary War, wrapped up in a catchy hip-hop tune.

Billboard reports that, according to Miranda, "Congratulations" was a cut song from Hamilton originally meant to be sung by the character of Angelica Schuyler. But it's almost impossible to divine what this song will actually be about based on its vague title alone, so I'll just go ahead and assume it's four minutes of this spoken word artist congratulating Miranda and the cast and crew of Hamilton on their 11 Tony Awards.

Or, you know, you could watch Renée Elise Goldsberry perform the song in a Ham4Ham rendition below.

Miranda teased this song at the New Yorker Festival last year, revealing that it was originally conceived as one in the show's series of rapped "Cabinet Battles." "It was enormously cathartic to write because you write about these men who wrote great things but also had this other legacy lived within the system that was horrible and abusive," he told the crowd. But ultimately it was cut from the finished product because, "It just brought the show to a screeching halt."

It remains to be seen if any of these new tracks will ever become as iconic as the original Hamilton soundtrack; but even if they don't, they'll at least be a welcome addition to the ever-growing legacy of the show that changed Broadway forever.