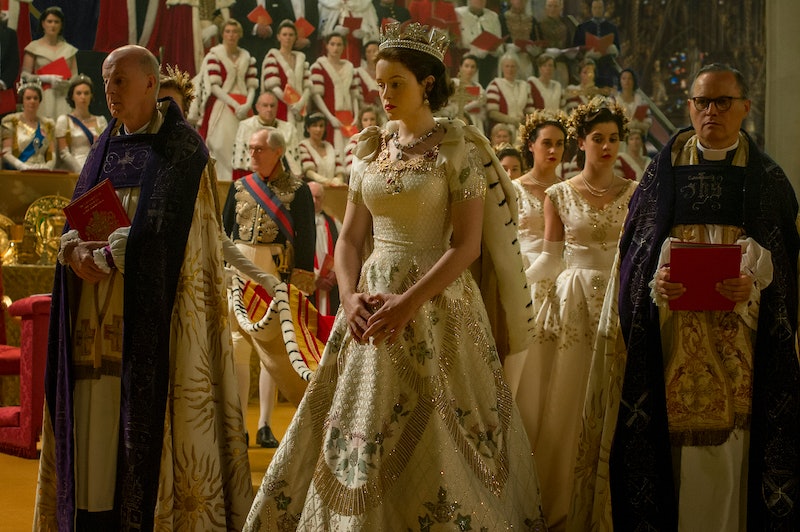 Although many of us may have spent our childhoods dreaming of becoming royalty, things were a little different for Elizabeth Windsor, whose fictionalized story is depicted in Netflix's new series The Crown . Her father, King George VI, was crowned after his older brother abdicated in order to marry Wallis Simpson and she witnessed firsthand how difficult the position and taxing the position could be — because it involves way more than galas, fancy attire, and jet-setting. In fact, the emotional toll of World War II combined with his heavy smoking habit played a large role in King George's declining health and he was only 56 years old when he passed away in 1952. She was crowned queen at the young age of 27 and, despite the daunting nature of this moment, Elizabeth shows extraordinary strength on The Crown. (A rep for the royals noted in a statement to Bustle that "The Crown is a fictional drama. The Royal Household has had no involvement.")

Spoilers ahead: Upon receiving news of her father's death, Elizabeth rushes from Kenya back to England. As she must immediately prepare to take on her new role as queen, she's given precious little time to grieve for her father. Furthermore, it's not a position she's eager to take on — as she tells her uncle, she would have preferred to raise her young children at Clarence House without an international spotlight on the family. Still, she rises to the occasion and, as we see in Episode 3, she quickly begins navigating the political aspects of the job as she fills her father's shoes.

During her first meeting with Prime Minister Winston Churchill, he seems to think that that due to her young age (her uncle referred to her as "Shirley Temple" and word got around quickly), she'll easily agree to all his wishes and demands. He's taken aback when she politely but assertively makes her own list of requests and let's him know that she's aware his position as Prime Minister is in jeopardy. It's clear that he's underestimated Elizabeth and, although she does ultimately need to keep the name Windsor and move into Buckingham Palace per tradition, she sets a strong and important precedent with Churchill that she's neither naive nor a pushover.

As if dealing with Parliament isn't stressful enough, there's also the matter of her husband, Philip who, in the show, does a pretty poor job of hiding his insecurities surrounding Elizabeth's new role as queen. As she struggles to balance her royal duties with her dedication to her family, Elizabeth suggests that he play a prominent role in planning and organizing her coronation. When Philip proposes a number of changes that break with tradition, she's willing to compromise — but Elizabeth is adamant that he kneel before her during the coronation. When he unfairly accuses her of having an "unattractive sense of authority," she's quick to point out that a strong man would be willing to kneel. He acquiesces, albeit quite petulantly, and Elizabeth's actions also send a strong message about an equal partnership — compromise is required by both parties, and strong men don't feel threatened by powerful women.

Today, Queen Elizabeth II is 90 years old and by all accounts she appears perfectly comfortable in her role — but her strength and assertiveness during her early days as queen deserve recognition.

More like this
'Derry Girls' Creator Teases Exciting Spin-Off Starring These Three Characters
By Olivia-Anne Cleary
'Derry Girls' Sister Michael Isn’t As Fictional As You Might Think
By Olivia-Anne Cleary
'Doctor Who’s New Star Is Already Huge On TikTok
By Maxine Harrison
What Does Michael Peterson’s Family Think Of 'The Staircase'?
By Arya Roshanian
Get Even More From Bustle — Sign Up For The Newsletter