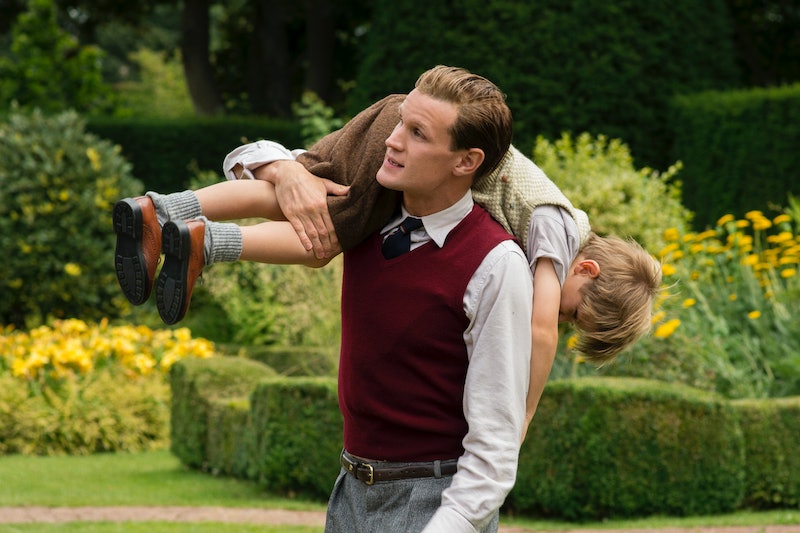 Queen Elizabeth II is the longest reigning British monarch ever; she was already a grandmother by the time I started learning about the British royal family. So the Netflix series The Crown is bound to illuminate her early life for me and lots of other Anglophiles who weren't around when she came into power. The first season of The Crown premieres on Netflix on Nov. 4. Elizabeth is played by Claire Foy, who you may know as Anne Boleyn from the miniseries Wolf Hall. Queen Elizabeth's husband of 69 years, Prince Philip, is played by Matt Smith. Smith stole scenes as Mr. Collins in Pride and Prejudice and Zombies and wielded a chainsaw in the American Psycho stage musical, but the actor's calling card will always be his stint as the Eleventh Doctor in the long-running British sci-fi series Doctor Who. Now he steps into the shoes of a real person, and I wonder if the actor's similarities to his The Crown character extend beyond the country they call home. This Matt Smith to Prince Philip comparison will show where these two men meet.

You'd have to dig pretty hard to find any co-star or fan saying a negative word about Smith. In an interview with The A.V. Club, the actor gave some emotional context to the moments in The Crown where Prince Philip struggles with his public life. "He walked two steps behind her, you know? That’s behind his wife," Smith said. "He had a quite difficult upbringing." Here are a few other other areas where Prince Philip and Matt Smith differ.

Philip was born in Corfu, Greece in 1921. Though he was a member of the Greek and Danish royal families, his family were exiled from the country soon after his birth, according to The Telegraph. He was living apart from his entire immediate family by the age of 10.

Per Biography.com, Smith is an Englishman, born and bred. He hails from Northampton, located in the East Midlands.

At 17, Prince Philip joined up with the navy, according to The Express. He served first as a midshipman, fighting for Allied Forces in World War II. He was promoted several times. After the war, he took an instructor's position on the HMS Royal Arthur, Wiltshire.

Soon after his big Doctor Who break, The Mirror reported on young Matt Smith's original career plan: to be a professional footballer. (That's soccer player, to the Americans.) An injury took a pin to that balloon, so he turned to acting instead. He was a member of Britain's National Youth Theatre, a non-profit supporting budding artists. Just this year, he returned to the institution as an alumnus to support its 60th anniversary gala.

Prince Philip joined the British monarchy in 1947 when he married his third cousin, then Princess Elizabeth. (According to Vanity Fair, they are both great-great-grandchildren of Queen Victoria and Prince Albert.) She became queen in 1952. His official designations include "Duke of Edinburgh" and "consort of the British monarch."

Depending on who you ask, a Brit might tell you that Doctor Who is as powerful a tradition as the monarchy. Matt Smith became the youngest actor to ever play the role of the time traveling protagonist when he took over for David Tennant in 2010. His last episode (not counting cameo appearances) aired in 2013.

Prince Philip challenges the stereotype of the reserved, proper Englishman. He has a reputation for making quips, sometimes in inappropriate situations. There's even a book cataloging the best (or worst) of his off-color comments, titled Duke Of Hazard: The Wit And Wisdom Of Prince Philip .

Matt Smith: Known For Being Great With Little Fans

Being a hero to children all over the world comes with the territory when you play Doctor Who. Smith has proven to be up to that level of worship by connecting immediately and directly with any child in his vicinity. This clip from a San Diego Comic-Con panel captures one of those moments.

And finally, as citizens of Great Britain, both Prince Philip and Matt Smith are both subjects of The Crown.

More like this
Mollie Gallagher Has A Deeply Personal Reason For Taking Up Skating
By Maxine Harrison
A New 'And Just Like That' Table Read Pic Confirms A Key Character's Return
By Jack Irvin and Grace Wehniainen
I Read Prince Harry's 'Spare' So You Don’t Have To: 11 Highlights To Know
By Marina Watts
This 'Gossip Girl' Wardrobe Error Has Gone Viral On TikTok
By Alyssa Lapid
Get Even More From Bustle — Sign Up For The Newsletter
From hair trends to relationship advice, our daily newsletter has everything you need to sound like a person who’s on TikTok, even if you aren’t.