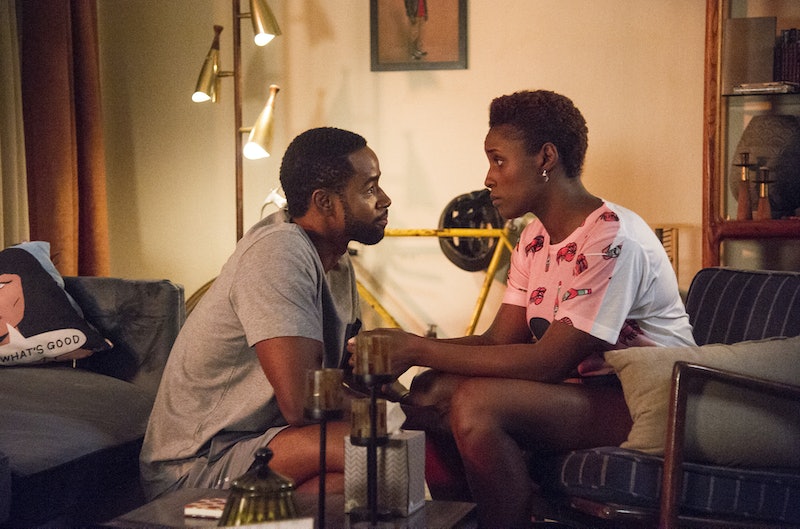 Even though the series had been building up to this moment since it premiered, it still didn't make it any easier to watch Issa cheat on Lawrence on Insecure . During Nov. 6's episode "Shady as F*ck," Issa acted on those mirror fantasies and had sex with Daniel while at a recording studio. She had been feeling self-conscious after her We Got Y'all students found her "Broken P*ssy" rap online (which was unintentionally Daniel's fault, by the by). That anxiousness about her boss finding out about "Broken P*ssy," coupled with all of her active decisions to pursue Daniel — some consciously, others subconsciously — culminated in them having sex.

I love Issa, but I'm pretty mad at her right now. Maybe it's because I know how awful that would make my own long-term guy feel. But it's also because to me, it seems like Issa knew exactly where this was going. She knew that by continuing to involve Daniel in her life it might lead to her cheating — that's why she didn't tell Lawrence about it and had been trying to play it cool with Molly. You only keep things like that to yourself when you don't want to hear the people you are closest to tell you that you're wrong.

While Issa obviously wanted to sleep with Daniel, I don't think Daniel is actually what she wants — especially based on her fleeing the scene of the crime in the final moments of the episode. She has been carrying a "f*ck torch" for him (such a gem of a phrase from Molly) and he's the guy she imagines "what if" scenarios about. However, as "Shady as F*ck" reminded viewers, they've already tried dating when they were younger. Yes, they've grown up since then, but it doesn't mean that they've necessarily changed who they are. If it didn't work before, does Issa really believe it will work now?

The other reason why I'm doubting her connection to Daniel is because in her mind, he's so completely intertwined with her lost dream of rapping. Lawrence says things like, "I know you used to rap in high school, but it's weird seeing you like this," as Daniel is only super supportive of Issa's rhymes. Based on that, isn't it kind of fascinating that she had sex with him right after he persuaded her to record some tracks? While I get that his focus on her talent is appealing, I feel like part of Issa was seduced by him encouraging her to be doing what she loves and praising her for it to boot. What's better than a confidence boost by a person you've always been attracted to when you're Insecure?

The cherry on top of the devastation cake was that Lawrence also could have cheated during this episode with the bank teller Tasha. When Tasha finally made it overtly clear that she was interested in dating him (didn't notice that before, Lawrence??), he gently made it clear he had a girlfriend. It wasn't a question or struggle for him, showing how dedicated he truly is to Issa.

The bottom line is that Issa should have handled the situation differently. Even if Daniel is the dream of what could have been for her, Lawrence is her current reality and she totally disregarded his feelings. And while I understand that she's dissatisfied with her life as it stands right now, particularly when it comes to her job, hurting Lawrence won't change that. And I hope she'll find a way to rectify the situation before either of them ends up even more hurt.