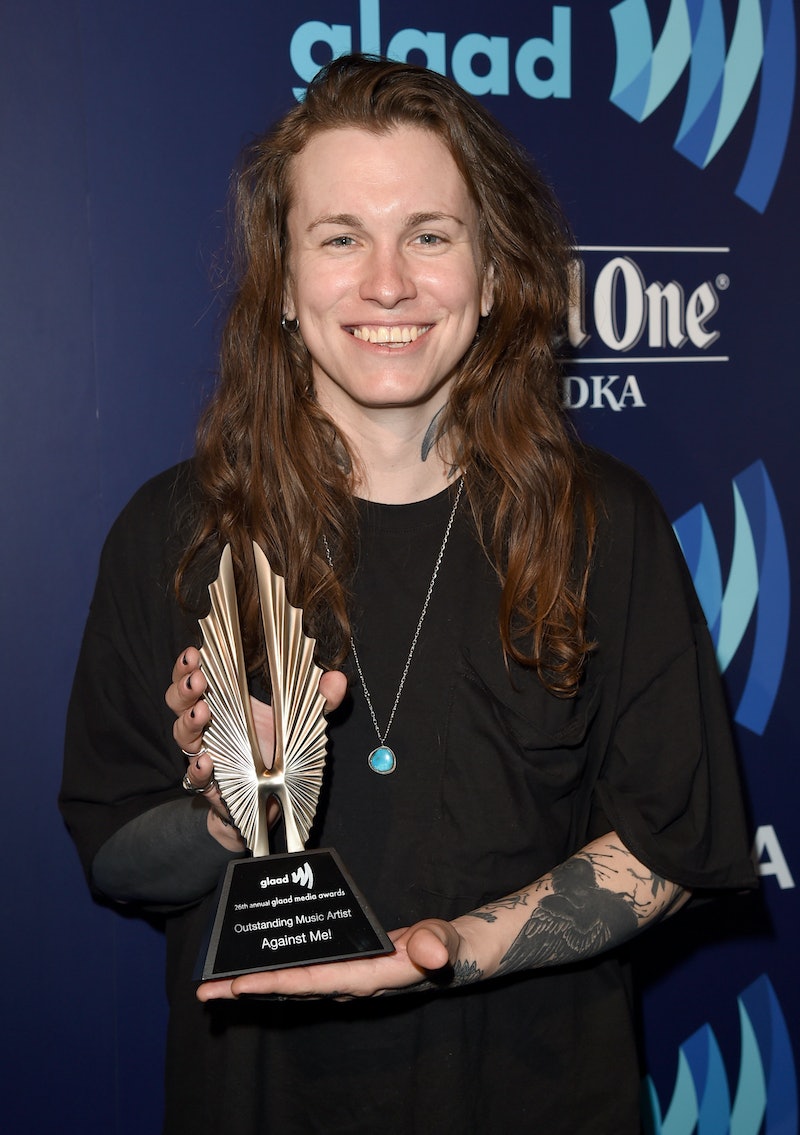 With her first book slated for release on Nov. 15, Against Me!'s lead singer wants you to join her in activism. If you help Laura Jane Grace get LGBT books to prisoners — through the aptly named project, LGBT Books to Prisoners — and you could win a copy of her memoir, Tranny: Confessions of Punk Rock's Most Infamous Anarchist Sellout. If you donate money or books to LGBT Books to Prisoners before the Nov. 18 deadline, you'll be entered for a chance to win one of five signed copies of Tranny. Gender Is Over will send all donations to LGBT Books for Prisoners on the Transgender Day of Remembrance, Nov. 20.

Across the U.S., transgender individuals are housed in prisons according to the genders they were assigned at birth. Trans women, in particular, are prime targets for rape and abuse. A 2007 study found that "59 percent of transgendered women housed in men's facilities are sexually abused in prison, versus just 4 percent of men."

Additionally, many trans people are imprisoned for defending themselves against gender-based violence. Ky Peterson killed his rapist in self-defense and is currently serving a 20-year sentence, despite pleading guilty to involuntary manslaughter, "which carries a maximum sentence of 10 years in jail." CeCe McDonald stabbed her racist, transphobic attacker with a pair of fabric scissors, and was sentenced to spend 41 months in a men's prison. McDonald was released early for good behavior, after serving 19 months.

Despite censure from the American Bar Association, killing a trans person out of "fear" — read: hatred — remains an acceptable legal defense in many places.

Though Grace has not been to prison, she says that reading LGBT literature helped her to navigate her transition. She tells MTV:

I remember really vividly, on the tour I did in between coming out personally and coming out publicly, discovering the book Whipping Girl by Julia Serrano. That was my bible. I read that nightly ... It was a new concept, the idea of as a trans person demanding rights and demanding respect just as any other human being should have. It completely blew my mind.

Grace came out to the rest of her band in February 2012, and publicly announced her transition in May of that year. Four years later, after North Carolina passed its discriminatory bathroom bill, H.B. 2, Grace burned her birth certificate onstage during a concert at Durham's Motorco Music Hall.

LGBT Books to Prisoners is “a trans-affirming, racial justice-focused, prison abolitionist project sending books to incarcerated LGBTQ-identified people across the United States." The organization sent out more than 3,000 packages of three to five books in 2015.

Prison staff are not often educated on LGBTQIA issues, and facilities may not request books that non-cishet individuals need. Prison systems also ban books arbitrarily, but sometimes have blatantly homophobic or transphobic reasons for doing so. That's what makes LGBT Books to Prisoners so important.

Donors can purchase books directly from one of LGBT Books to Prisoners' Amazon wishlists, including pre-order copies of Tranny. Those without the money to make a donation may still enter Grace's memoir giveaway.