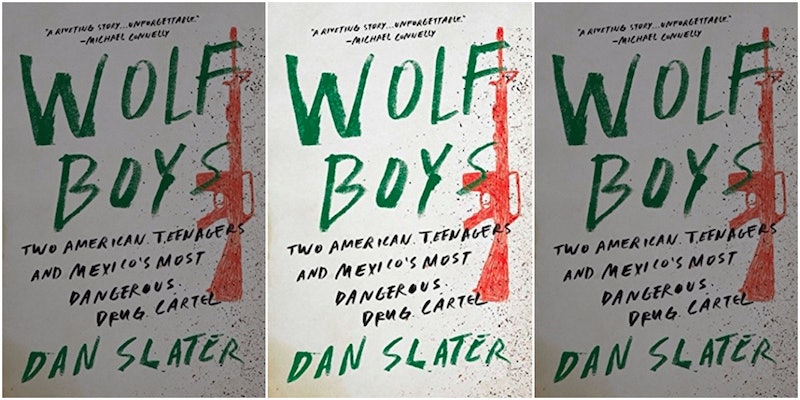 Another book joins the long list of titles that incarcerated Texans are not allowed to read, as Texas prisons ban the true-crime story Wolf Boys: Two American Teenagers and Mexico's Most Famous Drug Cartel, by Dan Slater. In having his book banned by the Texas Department of Criminal Justice (TDCJ), Slater joins a motley crew of renowned authors, including Stephen King, James Patterson, John Grisham, and Jodi Picoult.

First things first: Why did the TDCJ ban Wolf Boys? After an excerpt of Slater's nonfiction title appeared in Texas Monthly, the six members of the TDCJ's Directors Review Committee read Wolf Boys , and banned it from prisons across the state for what spokesperson Jason Clark calls "information on how to conceal and smuggle illegal narcotics." Here is that information, presented in its entirety:

Mario purchased pickup trucks from which he removed panels and lights. The trick was packing the drugs in a part of the vehicle where the body wouldn’t lose its hollow sound when slapped.

I know it's difficult, with you being an expert now and all, but try not to start an illegal drug-smuggling ring with that information.

All snark aside, the TDCJ's ban on Wolf Boys is the latest in a long line of mostly arbitrary censorship efforts. As of 2010, the Directors Review Committee did not read books to completion in order to assess whether or not they were appropriate for inmates to read. Instead, reviewers "scan[ed] through [books] looking for key words" that would constitute a ban.

Over the years, this system has led to some strange decisions. According to a report from the Texas Civil Rights Project (TCRP), Rus Ervin Funk's Stopping Rape: A Challenge for Men and Sandra Butler’s Conspiracy of Silence: The Trauma of Incest have been banned for containing sexually explicit passages, in spite of messages that define and condemn sexual violence. Prisoners in Texas cannot read Sojourner Truth's autobiography, Lisa Belkin's Show Me a Hero , or Freakonomics , because the TDCJ has determined that these books contain offensive "racial content."

Perhaps most confusing are those materials banned for so-called security reasons. Maps of Texas are not allowed, presumably because escaped inmates could use them to plot a path to safety. The TCRP notes that the TDCJ has also banned Tim Pat Coogan's The IRA, "because page 403 discusses 'escape.'" From the report:

Two famous IRA escape attempts are described on the page: one where prisoners “[got] away using knotted blankets and sheets,” and another where prisoners aboard a British prison boat escaped by “following the example of a seal” and swimming through a gap in the barb wire that surrounded the boat. Neither scenario could facilitate an escape from TDCJ facilities, as TDCJ does not utilize prison ships. Similarly, using bedsheets to make a rope ladder is hardly novel — popular cartoon characters like Daffy Duck, Tom and Jerry, and Mickey Mouse have also used the technique.

In a bizarre twist, inmates are free to read Che Guevara's Guerrilla Warfare, which will teach you everything you need to know about Molotov cocktail construction, as well as "U.S. Army manuals [that] contain combat strategy and tactics for fighting small, loosely organized groups." They may also read Adolf Hitler's Mein Kampf and David Duke's Jewish Supremacism.

As The Guardian points out, mailroom clerks, "who often don't have high school diplomas," are the first to flag materials as potentially inappropriate, and are sometimes "the judge and jury on a book’s fate." Texas is among the handful of states that have references databases listing banned and challenged books, but those databases are often closed to the public, even to the publishers and retailers who send shipments of reading material to prisons.

Texas is far from the only state to make poor decisions when it comes to selecting reading material for inmates. Arizona prisons have banned books on physics, mythology, dragons, home medical care, and local wildlife. Inmates at one prison in West Liberty, Kentucky cannot receive materials that "promote homosexuality." In 2010, a detention facility in Moncks Corner, South Carolina banned all books except the Christian Bible. Prisoners in Pennsylvania can't read books related to Dungeons & Dragons, Pathfinder, Magic: The Gathering, Warhammer 40k, or World of Warcraft, because those games allegedly "advocate violence, insurrection or guerrilla warfare against the government or any of its facilities."

Denying prisoners their right to read closes an outlet that may, in fact, make prisons less safe. Reading in prison prepares inmates for post-incarceration life by helping them develop beneficial skills, including empathy and general literacy. Yet some inmates have trouble even accessing books that would help them mount legal defenses, and many who find their requests for books denied are unable to appeal, simply because they have not, and cannot, read the book in question.